One of the many things I love about the start of fall is that it’s also caterpillar time! Though you can find caterpillars through the spring and summer, in my experience, they seem to be most abundant in fall. Fortunately, caterpillar season corresponds with the Museum’s annual BugFest event. For many years my coworkers and I have organized a “Caterpillarology” table to showcase the amazing diversity of North Carolina caterpillars. We spend time the week before the event searching out and collecting as many different larvae as possible. We typically end up with more than 50 different species. This year, with a virtual BugFest, I haven’t spent quite as much time hunting for them, but my coworkers and I have still found a variety of species in our yards. Since we can’t share them with you at a BugFest table, here’s a smorgasbord of caterpillar photos and facts! 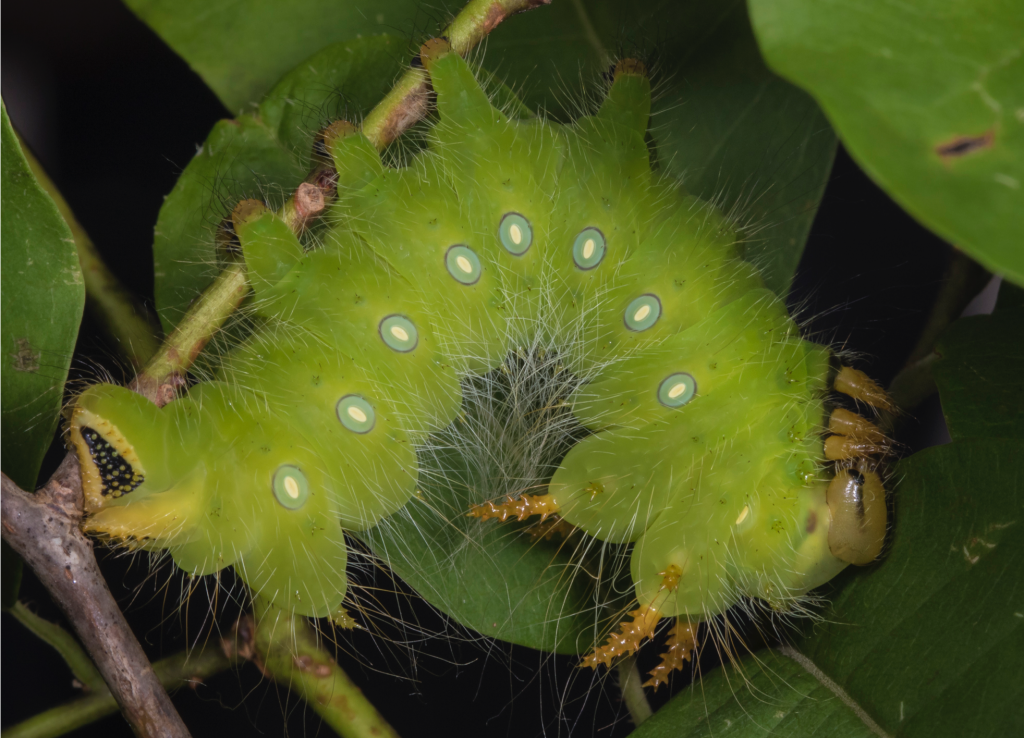 One of my favorite species to find is the imperial moth. As you might expect from its name, the moth is one of our largest. But so is the caterpillar! It grows to an impressive length of about 5 1/2 inches, and can be one of at least four different colors including green, red, or brown! Most of the imperial caterpillars I’ve seen have either been brown or green. This year, a former colleague at the Museum of History had an imperial moth lay eggs on her screen porch, and my coworker and fellow caterpillar enthusiast, Megan Davis, rescued a few to raise. Thus far, they’ve all been a lovely shade of brown. I’ve been caterpillar-sitting this past week and have enjoyed watching them shed their skin as they grow. 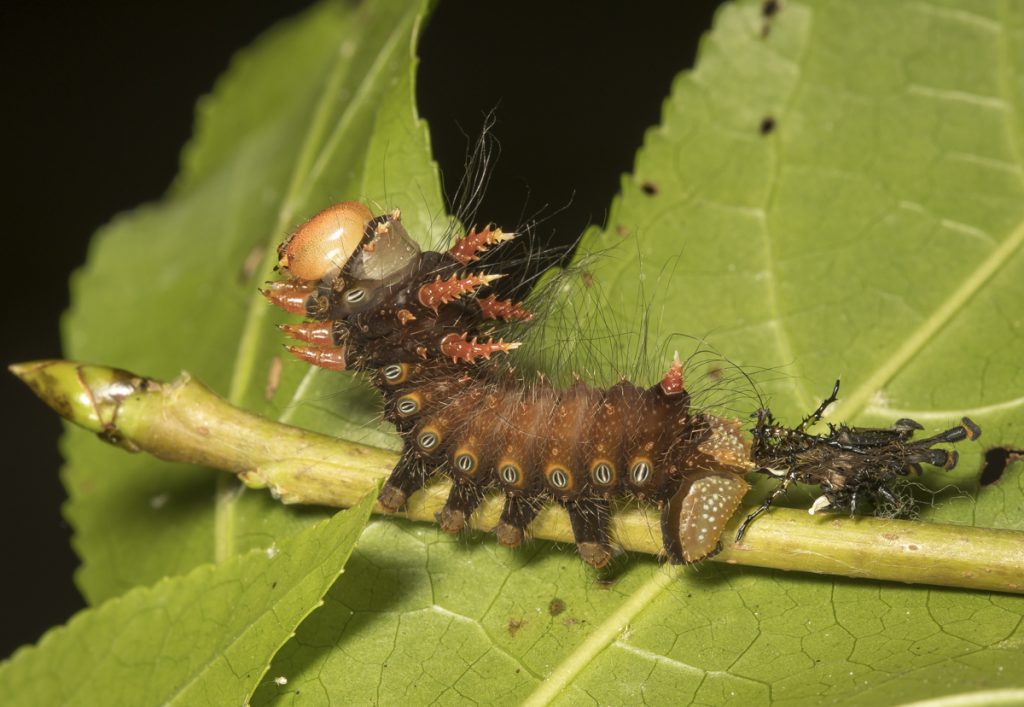 This is one of the imperial moth caterpillars that I am currently watching, immediately following a molt. This caterpillar is about 1 1/2 inches long. Photo: Mike Dunn.

This brings me to some important background information and scientific jargon. Caterpillars are the larval stage of butterflies and moths. The adult butterfly or moth lays an egg, typically on a plant that its larvae can feed on. (This was not the case for our imperial moth — we transferred the eggs from the screened porch to a variety of native tree species like sweet gum and red maple.) Some caterpillars are picky eaters and only like one type of plant. You may be familiar with monarch caterpillars that only eat milkweed plants, or black swallowtail caterpillars that eat plants in the parsley family (parsley, dill, fennel, carrots, etc.). Some species, including imperial caterpillars, are what we call “polyphagus,” which means they eat lots of different types of plants. Whether they’re picky or not, caterpillars are basically tubes for eating and growing. But … to grow as much as they do, they have do something else – shed their skin! If a human baby were to grow as much as a caterpillar does, it would be almost as big as Trouble the Whale (whose iconic skeleton is hanging above the first floor of the Museum). To accommodate that much growth, a caterpillar has to molt (shed its skin) as it grows. Most caterpillars go through five instars, or growth phases between molts. When a caterpillar sheds its skin, the skin opens up behind the head and it slowly wriggles out, leaving the crumpled old skin behind. Usually, so as not to waste all the good nutrients, it turns around and eats its shed skin! 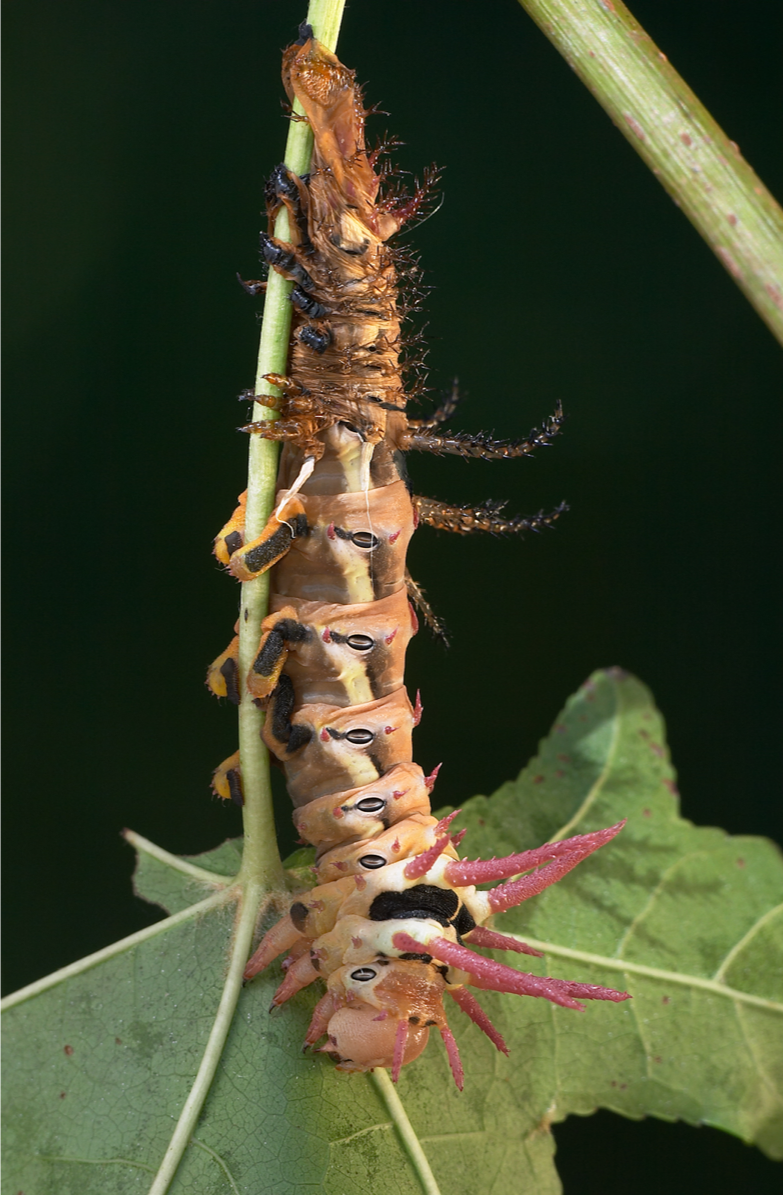 A caterpillar’s last molt is the most dramatic. This is when it sheds its final caterpillar skin and transforms into a pupa. In fact, it’s pretty much already a pupa by the time it does this — the pupa is inside the last molt! Butterflies hang themselves up with silk and form a naked pupa called a chrysalis. Many butterfly chrysalides are quite colorful. 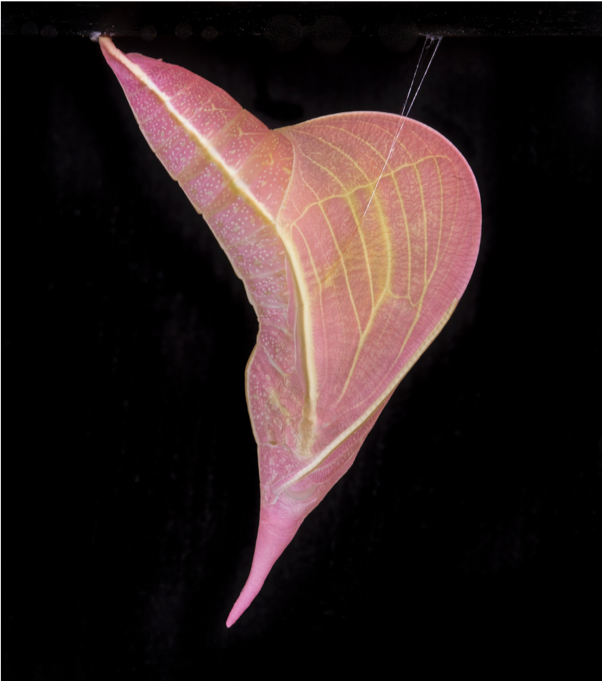 The cloudless sulphur butterfly has one of the most beautiful chrysalides I’ve ever seen! Photo: Mike Dunn.

Moth caterpillars will either form a cocoon, which is basically a pupa wrapped in silk (and sometimes leaves), or they will bury themselves into the ground and transform in the soil without the protection of a cocoon. 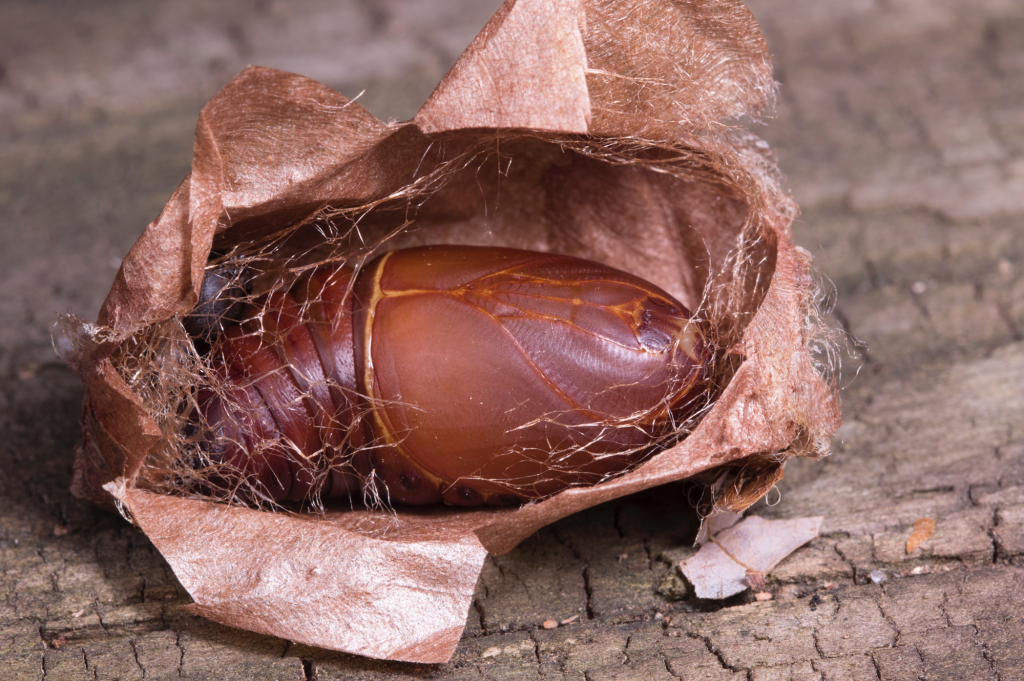 This cocoon has been carefully cut open to reveal the pupa inside. This doesn’t harm the moth – it can still develop and transform. Photo: Mike Dunn.

Anything that eats and grows as much as a caterpillar has to do something else important: expel waste. Caterpillar poop (as well as the poop of other insects) is called frass, one of my very favorite scientific words. Caterpillar frass has a distinctive appearance, kind of like a seed, and can be a good thing to look for if you’d like to find a caterpillar – there’s usually a scattering of frass beneath a plant a larva is feeding on. Also, keep your eye out for chewed leaves on many of our native plant species — this can also be a clue to a caterpillar’s whereabouts. 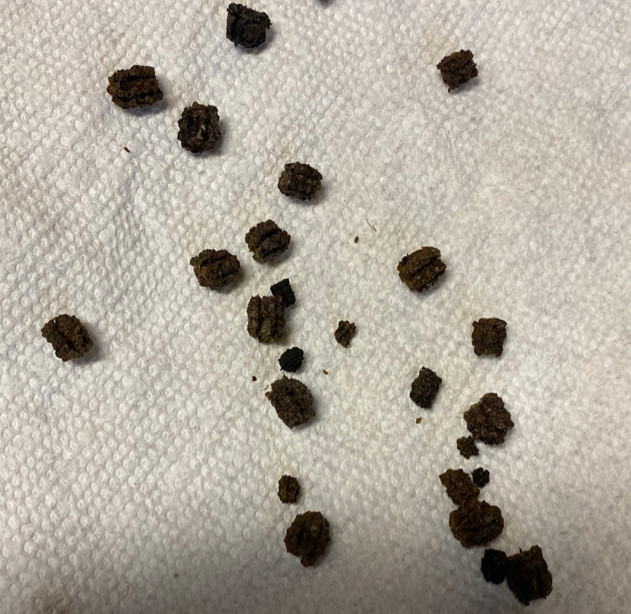 If you see the distinctive shape of caterpillar frass on the ground, look up!

Caterpillars come in an amazing variety of shapes and colors. One of my favorite groups, because they’re also some of the strangest-looking, are the slug caterpillars. Most caterpillars have three pairs of spiky-looking true legs near their head and five pairs of squishy prolegs along their abdomen (including an enlarged pair called claspers located at their rear end). 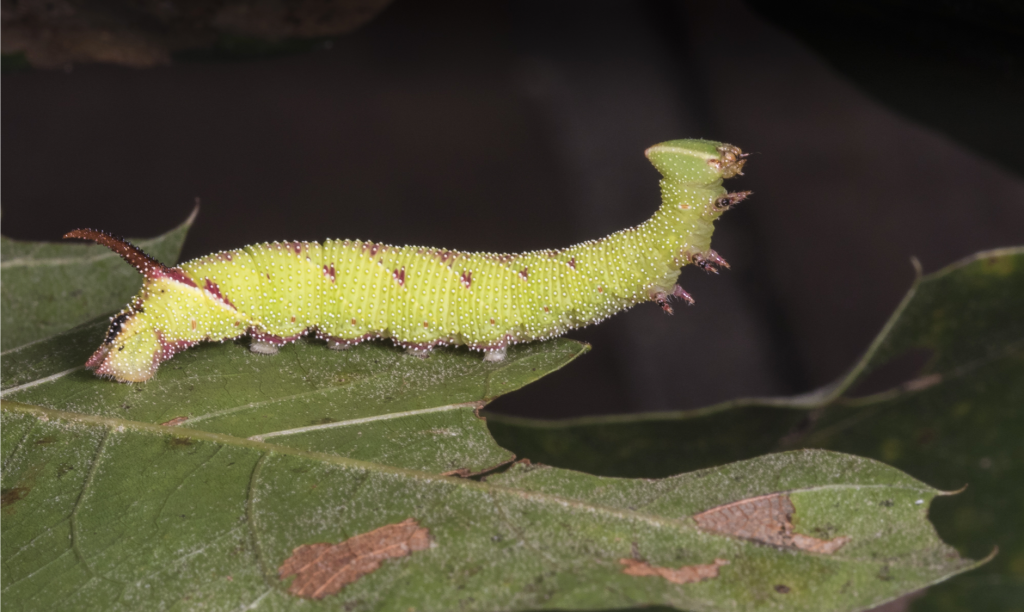 You can see the two types of legs on this walnut sphinx caterpillar fairly well. In this picture, the three pairs of true legs are being held up in the air; the five pairs of prolegs are on the surface of the leaf. Also, an interesting side note, this caterpillar is the only one I know of (in our area) that can make a noise! When bothered, it’s lets out a sound somewhere between a hiss and a squeal.

Unlike “normal” caterpillars, the slug caterpillars look more like moving helmets without visible legs. Many of them have stinging spines, so be careful not to rub your skin against them, as their venom can pack a punch! 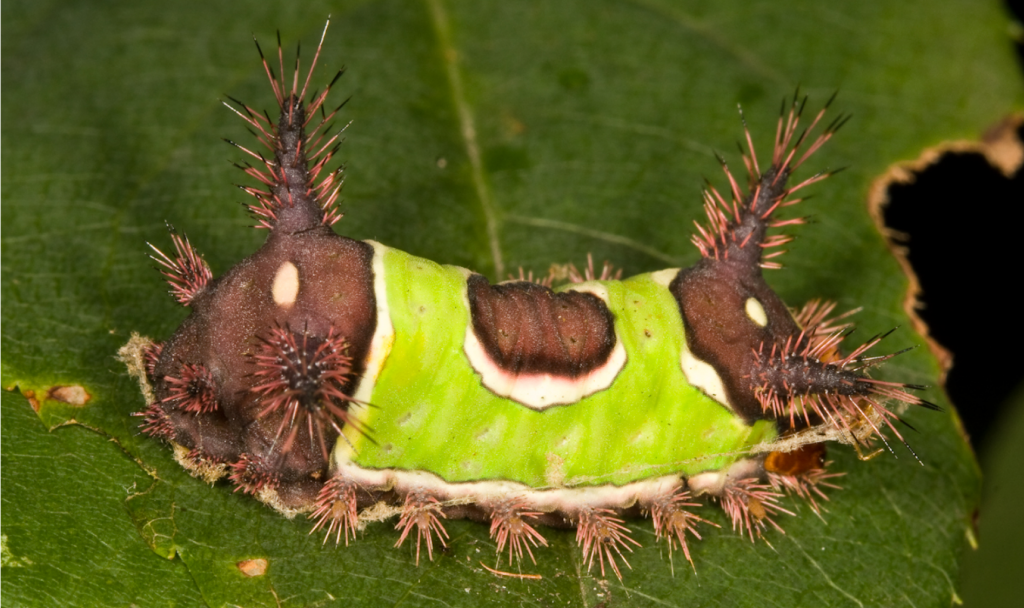 The saddleback caterpillar is one of our most common stinging slug caterpillars, and also one of the most striking in appearance! Photo: Mike Dunn. 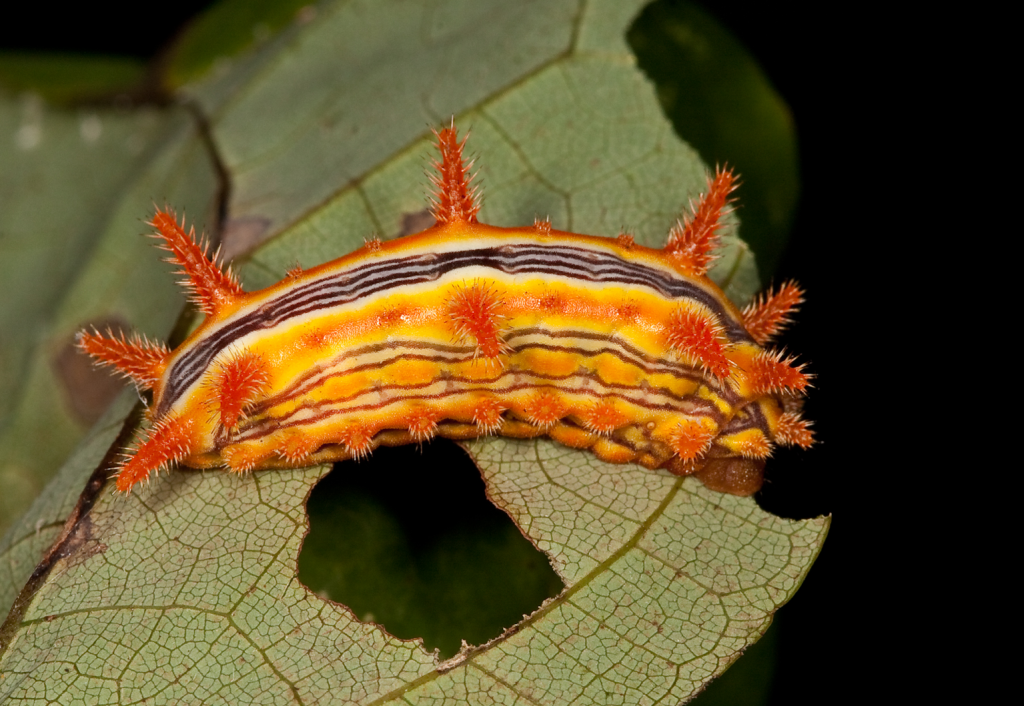 The stinging rose slug caterpillar is one of the most colorful caterpillars of all. Photo: Mike Dunn. 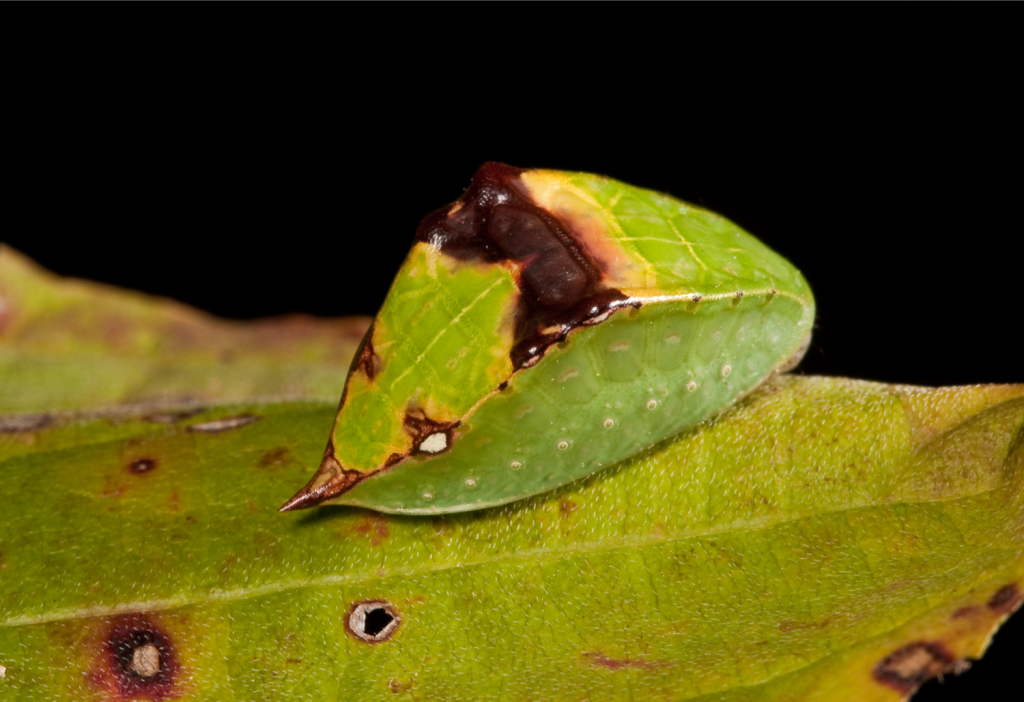 The skiff moth is a slug caterpillar that doesn’t sting, and hardly even looks like a caterpillar at all. Photo: Mike Dunn.

There are so many species of caterpillars, each with a unique look and adaptations to survive. Here are a few more of my favorites: 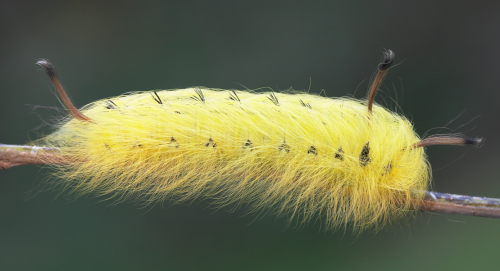 The spotted apatelodes is one of the furriest caterpillars. Don’t worry — it’s not a stinger! Photo: Mike Dunn. 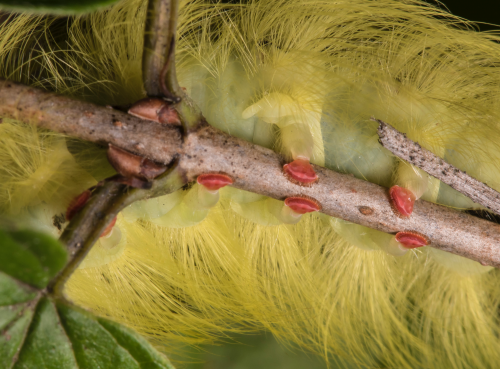 My favorite thing about the spotted apatelodes is that the tips of its prolegs are red! I’m not sure how this benefits the caterpillar, but it sure is an amazing feature to observe. Photo: Mike Dunn. 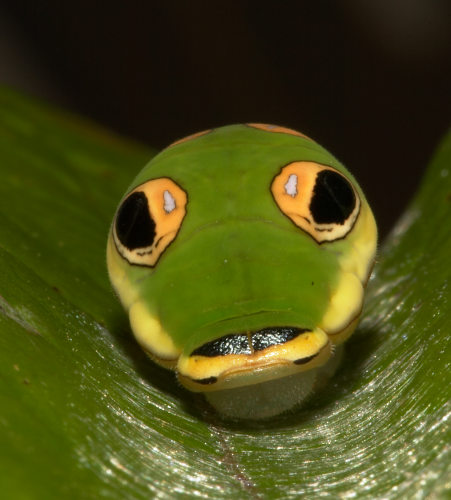 The spicebush swallowtail wins the award for best fake eyes. Its real eyes are tiny dots on its small, gray head, down below the green and yellow area. The eye spots are a predator deterrent. Doesn’t it look a bit like a snake? Photo: Mike Dunn. 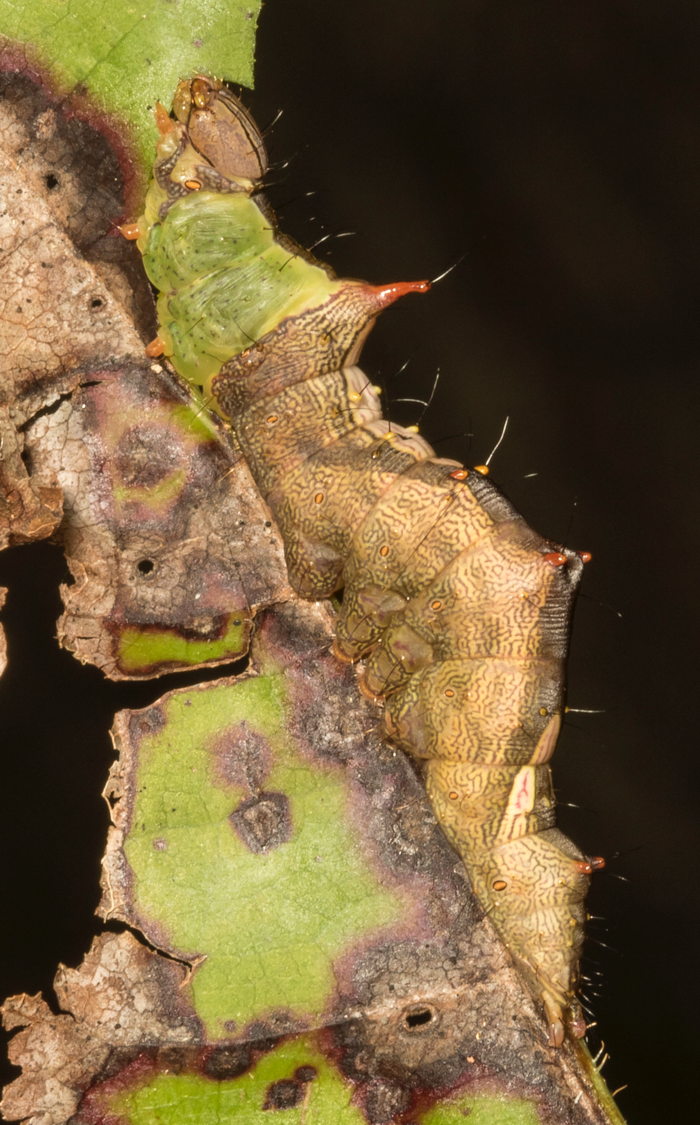 The checkered fringe prominent has a great defense strategy: to look exactly like the worn and torn edge of the leaf it’s been feeding on. Photo: Mike Dunn.

If learning a bit more about this fascinating life stage of butterflies and moths has inspired you to go out and find some caterpillars for yourself, give it a try! Look for frass and chewed leaves, or go out at night and search with a flashlight — many species are easier to spot under artificial light. The next week or two, before colder weather sets in, is a great time for some caterpillar hunting. If you find one you can’t identify, submit it to our ask a naturalist form and a Museum staff member can help you out! 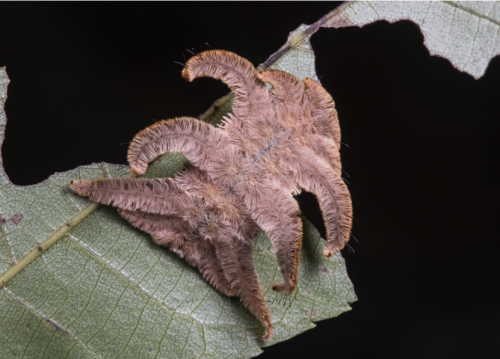 This caterpillar, the monkey slug, wins the superlative for “weirdest of all.” It’s a slug caterpillar with protruding appendages around its body. The appendages drop off when it turns into a pupa. Happy caterpillaring!