A new study has re-discovered fossil collections from a 19th century hermit that validate “phantom” fossil footprints collected in the 1950s showing dicynodonts coexisting with dinosaurs.

Before the dinosaurs, around 260 million years ago, a group of early mammal relatives called dicynodonts were the most abundant vertebrate land animals. These bizarre plant-eaters with tusks and turtle-like beaks were thought to have gone extinct by the Late Triassic Period, 210 million years ago, when dinosaurs first started to proliferate. However, in the 1950s, suspiciously dicynodont-like footprints were found alongside dinosaur prints in southern Africa, suggesting the presence of a late-surviving phantom dicynodont unknown in the skeletal record. These “phantom” prints were so out-of-place that they were disregarded as evidence for dicynodont survival by paleontologists. A new study has re-discovered fossil collections from a 19th century hermit that validate these “phantom” prints and show that dicynodonts coexisted with early plant-eating dinosaurs. While this research enhances our knowledge of ancient ecosystems, it also emphasizes the often-overlooked importance of trace fossils, like footprints, and the work of amateur scientists.

“Although we tend to think of paleontological discoveries coming from new field work, many of our most important conclusions come from specimens already in museums,” says Dr. Christian Kammerer, Research Curator of Paleontology at the North Carolina Museum of Natural Sciences and author of the new study.

The re-discovered fossils that solved this mystery were originally collected in South Africa in the 1870s by Alfred “Gogga” Brown. Brown was an amateur paleontologist and hermit who spent years trying, with little success, to interest European researchers in his discoveries. Brown had shipped these specimens to the Natural History Museum in Vienna in 1876, where they were deposited in the museum’s collection but never described.

“I knew the Brown collections in Vienna were largely unstudied, but there was general agreement that his Late Triassic collections were made up only of dinosaur fossils. To my great surprise, I immediately noticed clear dicynodont jaw and arm bones among these supposed ‘dinosaur’ fossils,” says Kammerer. “As I went through this collection I found more and more bones matching a dicynodont instead of a dinosaur, representing parts of the skull, limbs, and spinal column.” This was exciting—despite over a century of extensive collection, no skeletal evidence of a dicynodont had ever been recognized in the Late Triassic of South Africa.

Before this point, the only evidence of dicynodonts in the southern African Late Triassic was from questionable footprints: a short-toed, five-fingered track named Pentasauropus incredibilis (meaning the “incredible five-toed lizard foot”). In recognition of the importance of these tracks for suggesting the existence of Late Triassic dicynodonts and the contributions of “Gogga” Brown in collecting the actual fossil bones, the re-discovered and newly described dicynodont has been named Pentasaurus goggai (“Gogga’s five-[toed] lizard”). 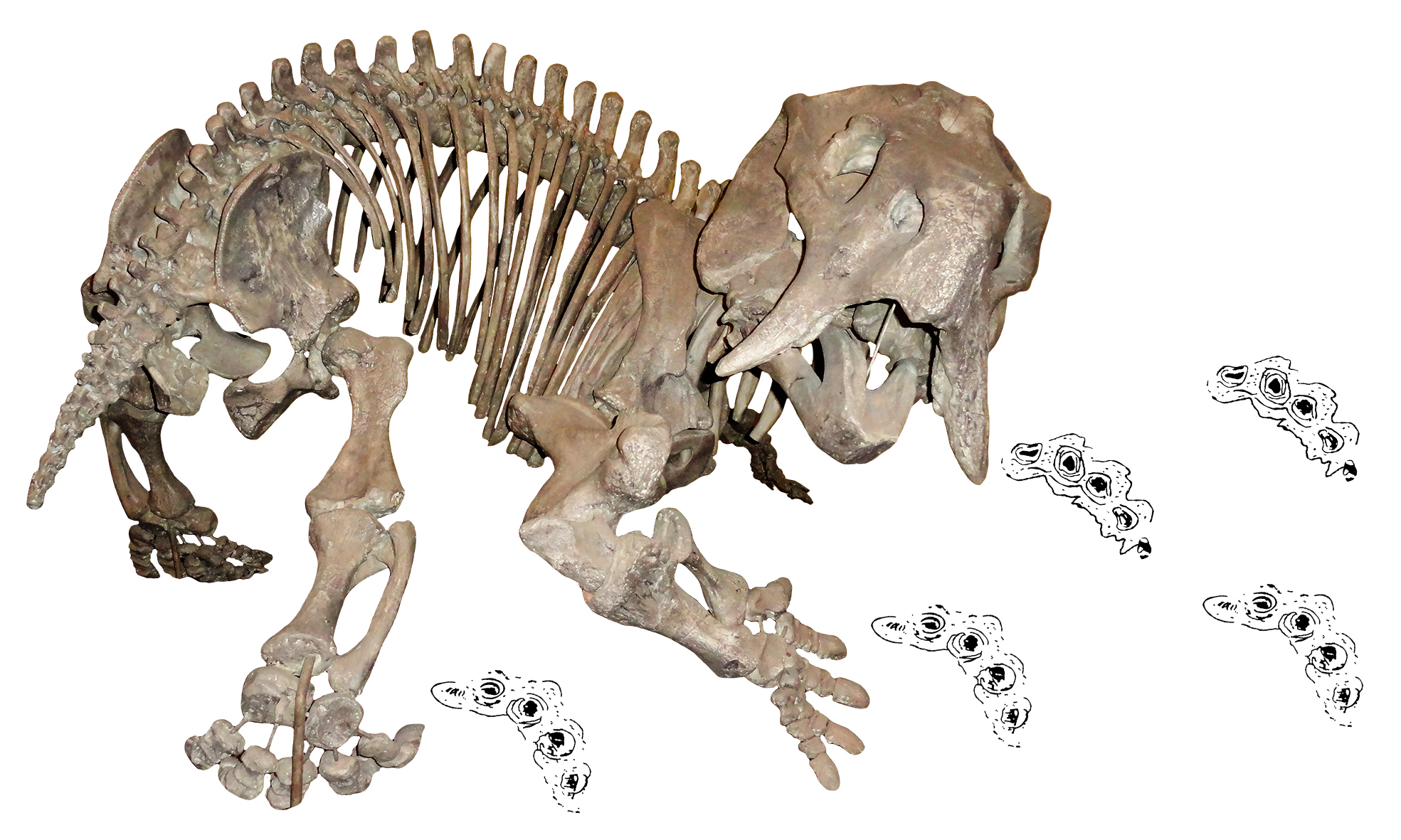 Skeleton of the dicynodont Placerias, a close relative of the newly-discovered Pentasaurus, with dicynodont trackways (Pentasauropus).

“The case of Pentasaurus illustrates the importance of various underappreciated sources of data in understanding prehistory,” says Kammerer. “You have the contributions of amateur researchers like ‘Gogga’ Brown, who was largely ignored in his 19th century heyday, the evidence from footprints, which some paleontologists disbelieved because they conflicted with the skeletal evidence, and of course the importance of well-curated museum collections that provide scientists today an opportunity to study specimens collected 140 years ago.”

The paper, “The first skeletal evidence of a dicynodont from the lower Elliot Formation of South Africa,” is published in the journal Palaeontologia africana.