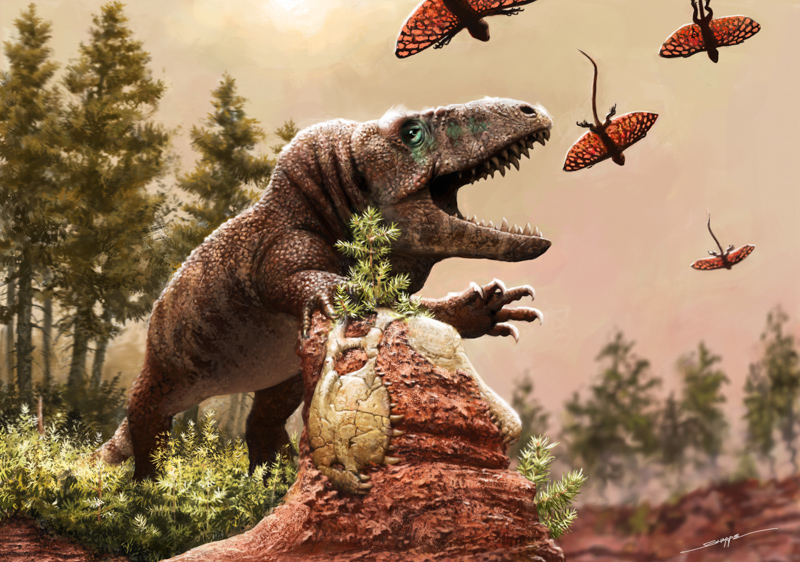 Artistic reconstruction of the reptile adaptive radiation in a terrestrial ecosystem during the warmest period in Earth’s history. Image depicts a massive, big-headed, carnivorous erythrosuchid (close relative to crocodiles and dinosaurs) and a tiny gliding reptile at about 240 million years ago. The erythrosuchid is chasing the gliding reptile and it is propelling itself using a fossilized skull of the extinct Dimetrodon (early mammalian ancestor) in a hot and dry river valley. Image: Henry Sharpe. Click to enlarge.

Studying climate change-induced mass extinctions in the deep geological past allows researchers to explore the impact of environmental crises on organismal evolution. One principal example is the Permian-Triassic climatic crises, a series of climatic shifts driven by global warming that occurred between the Middle Permian (265 million years ago) and Middle Triassic (230 million years ago). These climatic shifts caused two of the largest mass extinctions in the history of life at the end of the Permian, the first at 261myo and the other at 252myo, eliminating 86% of all animal species worldwide.

The end-Permian extinctions are important not only because of their magnitude, but also because they mark the onset of a new era in the history of the planet when reptiles became the dominant group of vertebrate animals living on land. During the Permian, vertebrate faunas on land were dominated by synapsids, the ancestors of mammals. After the Permian extinctions, in the Triassic Period (252-200 million years ago), reptiles evolved at rapid rates, creating an explosion of reptile diversity. This expansion was key to the construction of modern ecosystems and many extinct ecosystems. These rapid rates of evolution and diversification were believed by most paleontologists to be due to the extinction of competitors allowing reptiles to take over new habitats and food resources that several synapsid groups had dominated before their extinction.

However, in a new study in Sciences Advances researchers from the Museum of Comparative Zoology at Harvard University reveal the rapid evolution and radiation of reptiles began much earlier, before the end of the Permian, in connection to the steadily increasing global temperatures through a long series of climatic changes that spanned almost 60 million years in the geological record.

“We found that these periods of rapid evolution of reptiles were intimately connected to increasing temperatures. Some groups changed really fast and some less fast, but nearly all reptiles were evolving much faster than they ever had before,” said lead author postdoctoral fellow Tiago R. Simões.

Previous studies on the impacts of these changes have often neglected terrestrial vertebrates due to limited data availability, focusing mostly on the response from marine animals.

In this study, Simões and senior author Professor Stephanie E. Pierce (both at Harvard) worked alongside collaborators Professor Michael Caldwell (University of Alberta, Canada) and Dr. Christian Kammerer (North Carolina Museum of Natural Sciences) to examine early amniotes, which represent the forerunners of all modern mammals, reptiles, birds, and their closest extinct relatives, at the initial phase of their evolution. At this point in time the first groups of reptiles and mammal ancestors were splitting from each other and evolving along their own separate evolutionary paths.

“Reptiles represent an ideal and rare terrestrial system to study this question as they have a relatively good fossil record and survived a series of climatic crises including the ones leading up to the largest extinction in the history of complex life, the Permian-Triassic mass extinction,” said Simões.

Reptiles were relatively rare during the Permian compared to mammalian ancestors. However, things took a major shift during the Triassic when reptiles underwent a massive explosion in the number of species and morphological variety. This led to the appearance of most of the major living groups of reptiles (crocodiles, lizards, turtles) and several groups that are now entirely extinct.

The researchers created a dataset based on extensive first-hand data collection of more than 1,000 fossil specimens from 125 species of reptiles, synapsids, and their closest relatives during approximately 140 million years before and after the Permian-Triassic extinction. They then analyzed the data to detect when these species first originated and how fast they were evolving using state-of-the-art analytical techniques such as Bayesian evolutionary analysis, which is also used to understand the evolution of viruses such as SARS-COVID 19. The researchers then combined the new dataset with global temperature data spanning several million years in the geological record to provide a broad overview of the animals’ major adaptive response towards climatic shifts. 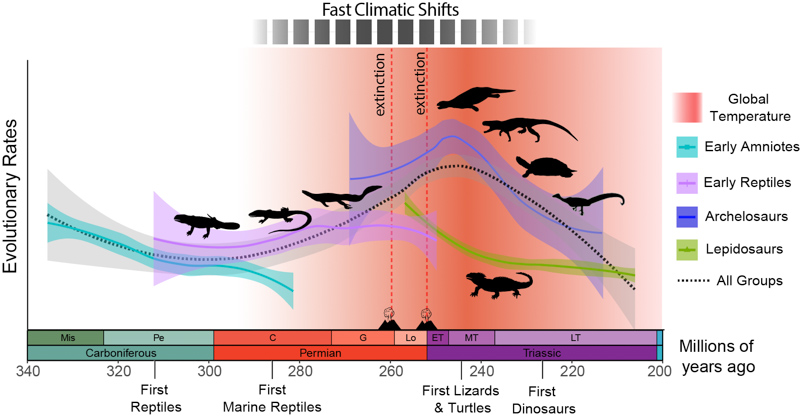 Evolutionary response from reptiles to global warming and fast climatic changes. Rates of evolution (adaptive anatomical changes) in reptiles start increasing early in the Permian (at about 294 million years ago), which also marks the onset of the longest period of successive fast climatic shifts in the geological record. From 261 until 235 million years ago, increased global warming from massive volcanic eruption contributed to further climate change and led to the hottest period in Earth’s history. This resulted in two mass extinctions and the demise of reptile competitors on land (mammalian ancestors). The most intensive period of global warming coincided with the fastest rates of evolution in reptiles, marking the diversification of reptile body plans and the origin of modern reptile groups. Click to enlarge.

“Our results reveal that periods of fast climatic shifts and global warming are associated with exceptionally high rates of anatomical change in most groups of reptiles as they adapted to new environmental conditions,” said Pierce, “and this process started long before the Permian-Triassic extinction, since at least 270 million years ago, indicating that the diversification of reptile body plans was not triggered by the P-T extinction event as previously thought, but in fact started tens of million years before that.”

“One reptile lineage, the lepidosaurs, which gave rise to the first lizards and tuataras, veered in the opposite direction of most reptile groups and underwent a phase of very slow rates of change to their overall anatomy,” said Simões, “essentially, their body plans were constrained by natural selection, instead of going rogue and radically changing like most other reptiles at the time.” The researchers suggest this is due to pre-adaptations on their body size to better cope with high temperatures.

“The physiology of organisms is really dependent on their body size,” said Simões, “small-bodied reptiles can better exchange heat with their surrounding environment. The first lizards and tuataras were much smaller than other groups of reptiles, not that different from their modern relatives, and so they were better adapted to cope with drastic temperature changes. The much larger ancestors of crocodiles, turtles, and dinosaurs could not lose heat as easily and had to quickly change their bodies to adapt to the new environmental conditions.”

“Large-sized reptiles basically took two routes to deal with these climate shifts,” said Pierce, “they either migrated closer to temperate regions or invaded the aquatic world where they didn’t need to worry about overheating because water can absorb heat and maintain its temperature much better than air.”

“This strong association between rising temperatures in the geological past and a biological response by dramatically different groups of reptiles suggests climate change was a key factor in explaining the origin and the explosion of new reptile body plans during the latest Permian and Triassic,” said Simões.

“Our conclusions derive from intensive study of fossil specimens in museum collections,” adds Kammerer. “There is still a huge amount to be learned about the early evolution of reptiles from known fossils, it just requires time and attention. While big-picture studies such as this, involving broad timescales and climate change, garner substantial interest, they are meaningless without fundamental, specimen-based research underlying them.”