On August 25, 2020, over the Moroccan Sahara near the village of Tarda, a rock from space was seen as a blazing fireball falling to Earth. As it exploded, pieces of the rock that survived the journey – the Tarda meteorites – were quickly collected, and earlier this year, Dr. Rachel Smith, NCMNS Head of the Astronomy & Astrophysics Research Lab and Curator of Meteorites, procured a sample for the Museum.

Classified as a carbonaceous chondrite, Tarda is among the most primitive and important meteorites in that it preserves within it the exact material left over from the formation of the solar system approximately 4½ billion years ago, making it a relic of the age of nascent planets that scientists are still working to fully understand.

Current studies suggest that Tarda could be a rare sample of a dark and primitive kind of asteroid called D-type, possibly from the outer reaches of the asteroid belt (between Mars and Jupiter) or as far out as the Kuiper Belt where the icy comets reside beyond the orbit of Neptune. It is rich in organic (meaning containing carbon) molecules, which while not evidence of actual life, are the precursors and components of all life as we know it.

Tarda has particular astrobiological significance in that it is one of a few meteorites discovered to contain amino acids – complex organic molecules that are the building blocks of proteins in all life on Earth. First discovered in the Murchison meteorite that fell in Australia in 1969, amino acids within asteroids and surviving in meteorites are key evidence that complex organic molecules are not unique to Earth, and can survive intact for billions of years in space, as well as within meteorites after crashing through our atmosphere. Tarda’s amino acids and other components are still being studied. Thus far, it is in a group all its own, unique among the other carbonaceous chondrites. 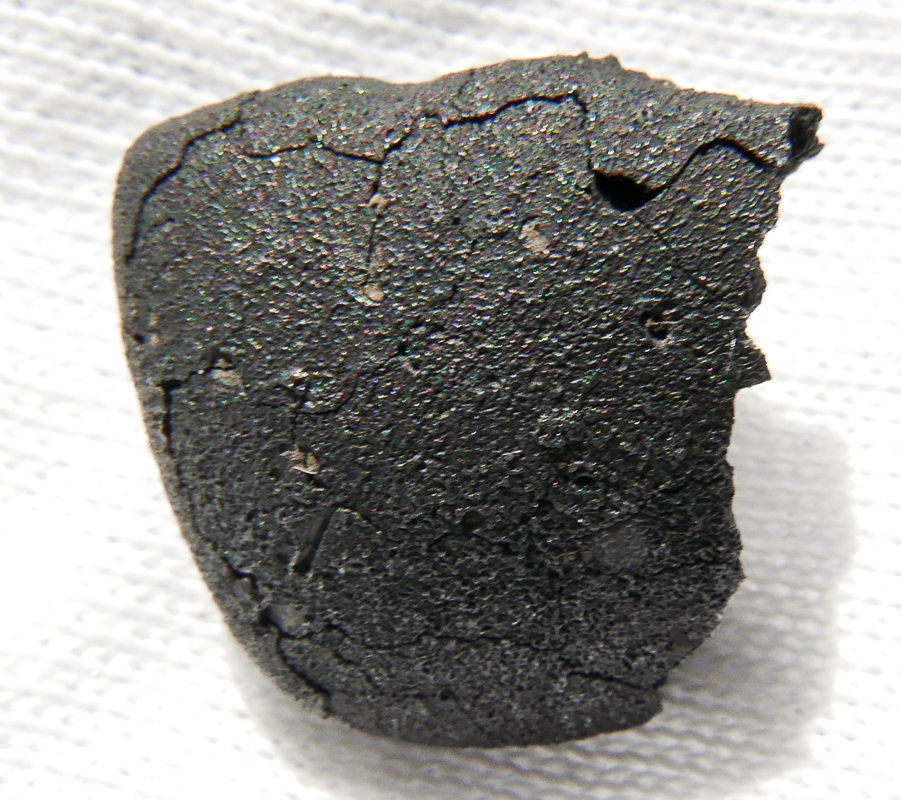 Like the other unusual meteorites with amino acids, Tarda could hold important clues to the earliest chemistry that eventually led to the origin of life. Some extraterrestrial amino acids are identical to those on Earth, while many are not found anywhere in our biosphere, making them uniquely space-borne, and many have yet to be fully identified and named. The majority of amino acids come in mirror-image varieties, termed “left-handed” and “right-handed,” but it is still a mystery as to why all life on Earth uses exclusively the left-handed version. Scientists postulate that organic- and amino acid-rich meteorites, many of which show excesses of the left-handed variety, could have seeded Earth with the molecules needed for life more than 3 billion years ago in an era when planets and moons were bombarded by asteroids and comets.

In spite of its small size (weighing in at a little more than 5 grams), the Museum’s sample of Tarda is further special in that its surface bears telltale scars from its journey through the Earth’s atmosphere.

As it traveled at terminal velocity toward Earth at up to 400 miles/hour (180 meters/second) Tarda’s surface material melted and left a fusion crust (as seen in the image above). Meteorites that are found quickly after falling can have a preserved crust much like this one, spared the effects of Earth’s weather and erosion.

The green arrows point to a roll-over “lip” resulting from stable orientation as the meteorite fell to Earth. Photo: R. Smith/NCMNS.

Even more unusual, this sample is “oriented” — a rare find that shows how it passed through our atmosphere. Rocks falling in a single direction, as opposed to tumbling, are subjected to a buildup of heat and pressure differences between the leading and trailing sides of the rock. This leads to a roll-over rim, or “lip” that forms when the leading side melts over the trailing edge, similar to the heat shield of the Apollo capsule that protected the astronauts riding back through our atmosphere within the ship’s protective design. (Detailed in the above image). 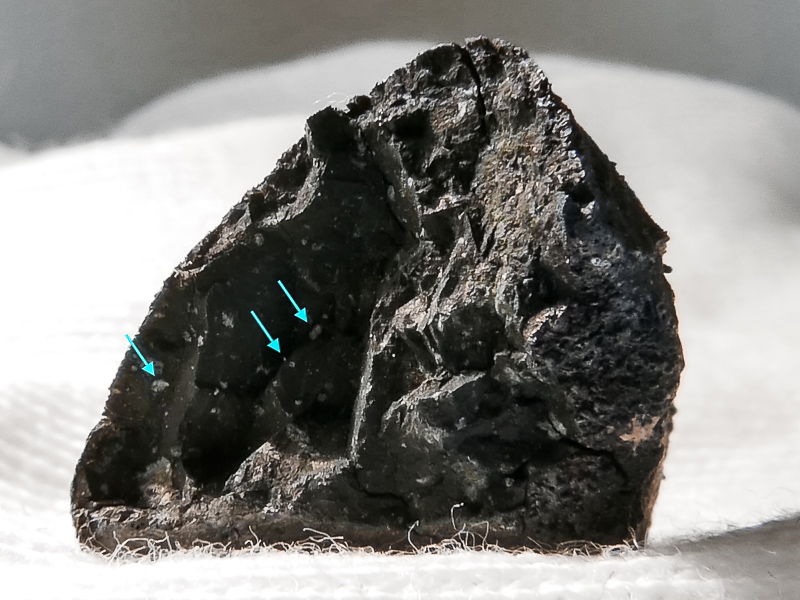 The bright blue arrows point toward specks of nickel and iron on the interior face of Tarda. Photo: R. Smith/NCMNS.

In addition, the Museum’s sample has a window to the interior, where we can easily see white specks that are bits of nickel and iron, vestiges of primordial metals from the creation of the planets (as seen in the image above).

Dr. Smith plans to study Tarda using computed tomography (CT), which will reveal many layers and mineral inclusions without damaging the rock. Experiments with collaborators may also involve molecular analyses of small grains from the surface.

While not currently on display, Dr. Smith will be sharing ongoing science with Tarda which will be viewable by Museum guests on the large screens in the Astronomy & Astrophysics Research Lab, and in various public programs during the year.

The Museum wishes to thank the generous J. Donald Cline Meteorite Collection Endowment for making possible the purchase of Tarda.