There’s something squirrely about groundhogs. They are squirrels, and sometimes exhibit squirrely behavior.  Groundhogs are the largest members of the Sciuridae, or the squirrel family. You are likely familiar with at least some other members of this family in North Carolina: the northern flying squirrel, southern flying squirrel, red squirrel, eastern gray squirrel, fox squirrel, or eastern chipmunk.  Members of the Sciuridae can be found on all continents except Australia and Antarctica but are absent on many islands around the world.  They show a great range in size and color patterns as well as habits and habitats.

We can divide squirrels by their periods of activity into nocturnal squirrels, which are active at night (like flying squirrels), and diurnal squirrels, which go about their business during daylight hours.  We can also consider whether they spend most of their time in trees or on the ground.  Any squirrel may spend some time in either trees or on the ground, but chipmunks and groundhogs are the only North Carolina species we consider to be ground squirrels.  Squirrels typically have large eyes and a long, bushy tail.  The more time that species of squirrels spend in trees, the longer and bushier their tails are. The squirrel that is the focus of this post has the shortest (relative to overall length) and least bushy tail of all North Carolina sciurids, the groundhog. 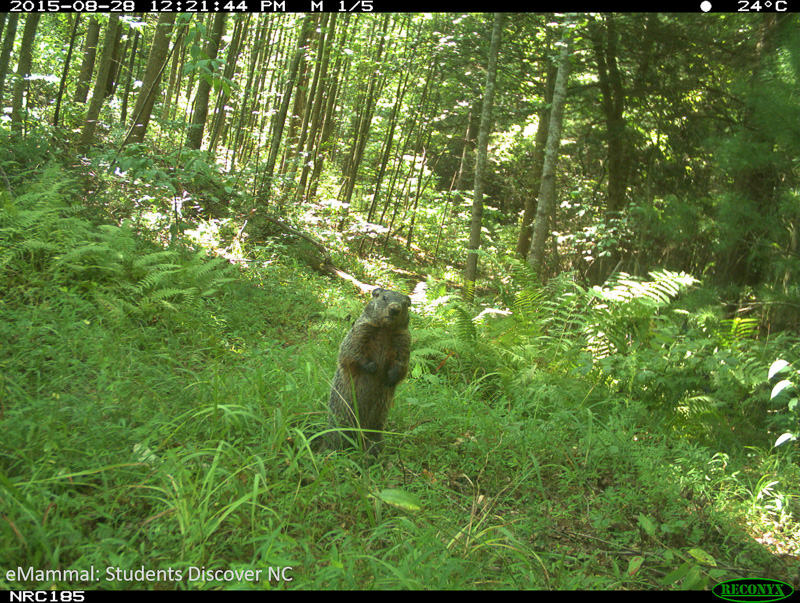 Groundhogs come in various shades of brown, gray, or cinnamon.  Long, dark guard hairs have white tips and give an overall grizzled appearance to their fur.  Their tails are well furred, and are about ¼ of the body length.  They have short, rounded ears, black noses and black feet.  Though they make themselves look larger when standing on their hind feet, which they do often, they are only about the size of a housecat.  Females may be a little larger than males and weigh as much as 13 pounds.

Our largest squirrel is known by several names including whistle pig, woodchuck and land beaver.  I don’t know where the name groundhog comes from, except that they are rather chunky and use underground burrows.  The other most often-used common name for this animal — woodchuck — likely has Native American origins. Wuchak, wejack or otcheck are names used by indigenous peoples for the groundhog.  The Latin name, Marmota monax, has origins in Native American languages with monax meaning “digger.”  The rarer and whimsical name, “whistle pig,” is easy enough to decipher.  Groundhogs will emit high-pitched alarm calls when they perceive danger. While I’ve never heard anyone refer to groundhogs as land beavers, this name also has an origin that’s pretty easy to guess. They do superficially resemble beavers, though are considerably smaller and lack the paddle tail, of course.  Interestingly enough, groundhogs are good swimmers and can either take to the water or climb trees to escape predators. 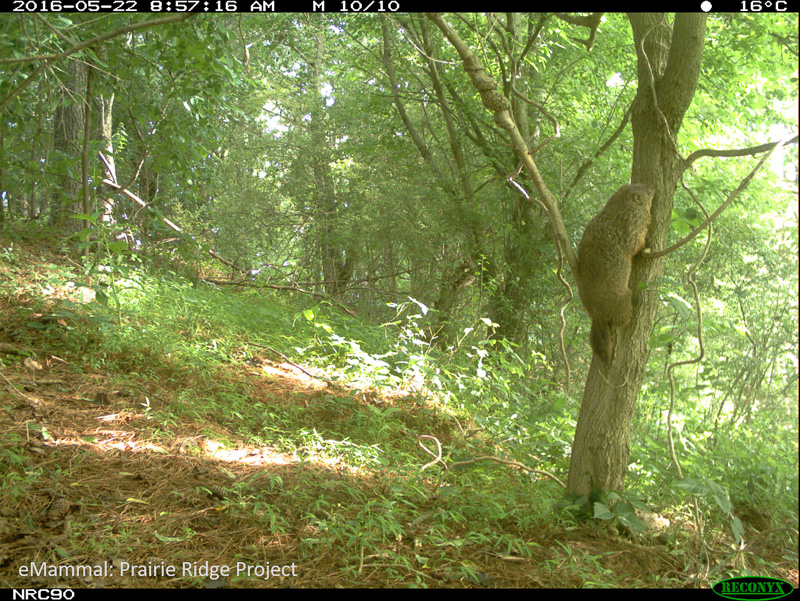 Groundhogs use different dens during the summer and winter.  Summer dens are often quite large and have multiple openings.  These burrows are situated near foraging areas, and foraging areas are often along ecotones, or edges of woods and fields.  Edge habitat is important for a variety of species as it generally offers both foraging opportunities and cover.  Groundhogs mainly eat herbaceous plants: grasses, clover, dandelion, and of course, garden vegetables. They may also consume insects, snails, eggs, and buds of woody plants.

Females give birth in the spring to four to six blind and naked young.  Young grow quickly and can begin to eat green vegetation brought into the burrow by the mother at about four weeks of age.  Soon after, they can begin to leave the burrow to forage on their own.  Because they are not social animals, the young do not engage in play, but immediately begin to exhibit adult behavior of digging and burrowing – skills that will serve them when they are on their own in mid-summer. 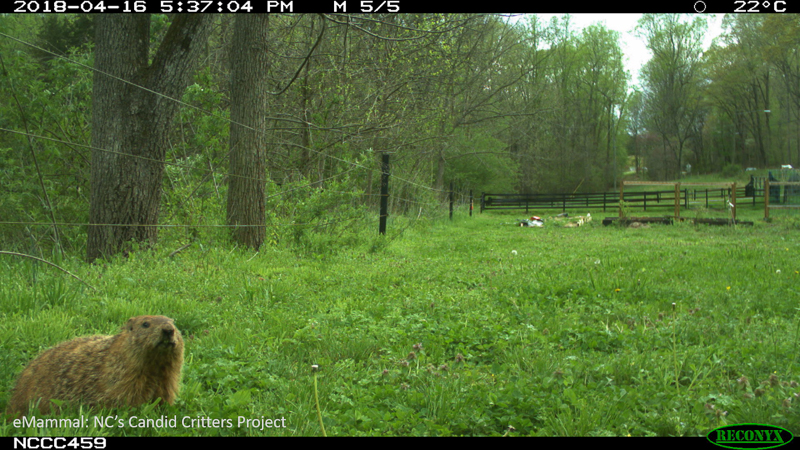 The summer dens are kept clean, with loose soil being swept out to the surface.  Adults and young alike bury their feces, either in a discreet location within the burrow system or just outside an opening.  By the end of summer, each groundhog will increase its weight by 1/3.  Shortening days trigger the onset of hibernation.  A chemical which circulates in their blood signals a drop in internal temperature to just above freezing and a rapid decrease in heartrate.  In fact, blood serum taken from a hibernating groundhog can initiate hibernation out of season when injected into the same individual within three days of injection.

Winter dens are small, have a single opening, and are established in more protected areas like woods or brushy areas.  Their only purpose is to provide a safe shelter for an individual during hibernation.  Hibernation lasts three or four months, or maybe less in our Piedmont and Coastal Plain groundhogs.  Males typically emerge before females to establish their territory in preparation for spring mating.  They typically do not stay out after that initial emergence but return to their den when temperatures are not favorable.  It is this behavior that is thought to be behind the Groundhog Day tradition.

When Europeans first arrived in this country, groundhogs were not so common.  But, as forests were cleared and roads were established, that vital edge habitat allowed for a range expansion and for populations to flourish.  Their range expansion in North Carolina is clearly displayed in this map. 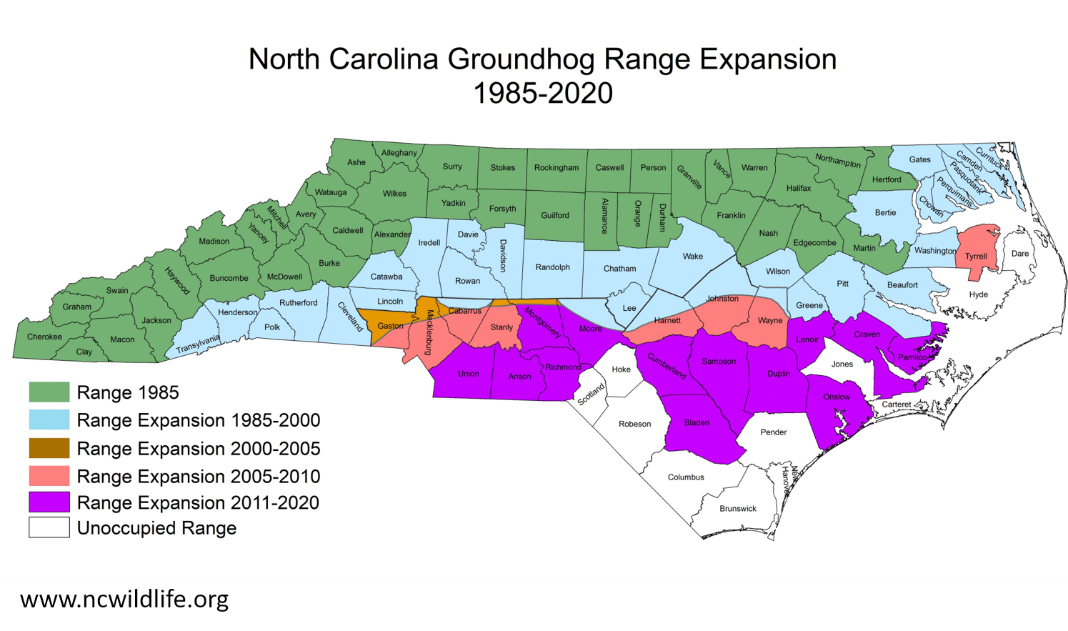 Groundhogs are solitary animals, though a large field may host dens of several individuals.  Males and females only share a den during mating season and males are evicted before young are born. They are territorial and rely heavily on sight, sound and smell.  When standing on their hind legs they are watching, surveying their surroundings – vigilant. The high-pitched whistle is a warning cry to others that danger is near.  And they use scent markings to establish and maintain territories.  One definition I found for the word “squirrely” is “nervous, hyper-concerned, protective…,” and most definitions pointed to nervous or anxious behavior.  Vigilance can make a groundhog seem squirrely, I think.  I hope you’ve enjoyed reading about our largest squirrel!