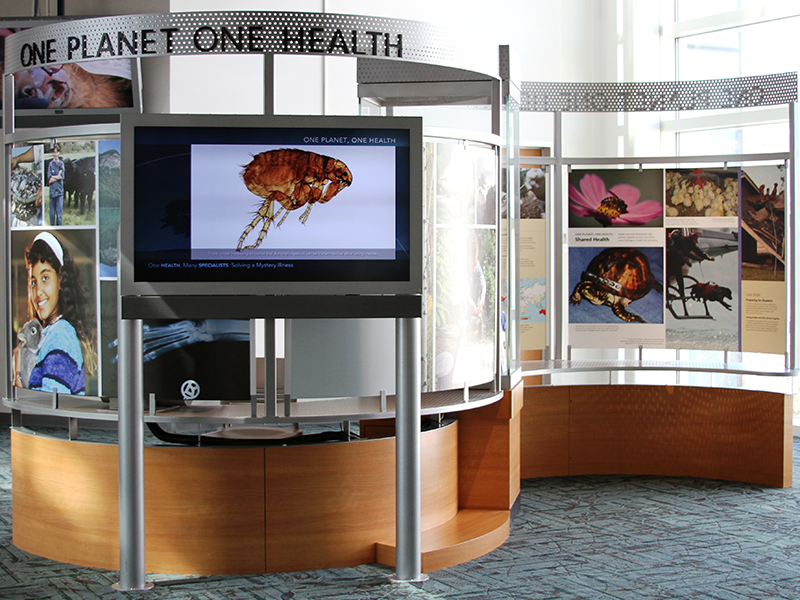 As the human population increases, continued research and public action are critical to understanding the balance of life on our planet, and to maintaining the health of the environment and all its inhabitants. It becomes more and more important for us to understand how the health of the Earth and the health of animals, including pets, livestock, and wildlife, relate to human health and that all are interconnected. Through a mix of text, images, video, and real artifacts the One Planet, One Health Exhibit tells many stories that help to illuminate this connection to the public.

Human health and the health of other animals on our planet are intimately linked. We all breathe the same air, drink the same water, and share the same environment. Ultimately reiterating: Healthy Environment = Healthy Wildlife = Healthy Livestock = Healthy Pets= Healthy People = One Health. It is critical that veterinarians, doctors, biologists, public health professionals, government agencies, and the public work together to keep the Earth and its inhabitants healthy. All living systems follow the same basic principles. Data collected and knowledge gained from research into these principles can be interpreted and applied to help advance health science and health management for all.

Because humans have a variety of close relationships with animals, animal health affects human health. The health of the environment directly affects the health of people and all other living things because we ultimately share and rely on the same natural resources for life. For example, keeping Earth’s water and air “healthy” is vital to the health of all.