Art Bogan's research focuses on the systematics, phylogeny and evolution of freshwater mollusks. His main research emphasis is on the bivalve order Unionida, the freshwater bivalves. He is collaborating with several people on problems in phylogeny of the order, questions on the evolution of morphology and reproduction and how all of this affects the modern classification of this endangered group of animals. He is collaborating on a type catalog of the 800+ taxa described in the North American Pleurocidae [Gastropoda] with Jeff Garner and Paul Johnson (colleagues from Alabama), and Ellen Strong (Smithsonian Institution). This is laying the ground work for a revision of the phylogeny and classification of this major group of eastern North American freshwater gastropods. Additionally, he is coordinating the revision of the order Unionoida section of the Treatise of Invertebrate Paleontology. This covers the modern and fossil record of this order down to the generic level. All remaining time is spent on the curation of the H.D. Athearn freshwater mollusk collection into our Research Mollusk Collection.

Workbook and Key to the Freshwater Bivalves of North Carolina

This is an introductory resource for learning to identify the state's freshwater bivalves or clams. It was developed for N.C. Department of Transportation biologists participating in a February 2002 workshop, and subsequently revised based on their comments. You need Adobe Acrobat Reader to open these files. It features:

Mollusk Bibliography Database: A searchable database of literature on freshwater mussels and, to a lesser extent, other freshwater mollusks. With around 14,000 references, the database covers freshwater mussels worldwide and includes paleontological literature, "gray" literature, theses, and dissertations. Maintained by Kevin Cummings (Illinois Natural History Survey), Dr. Arthur Bogan (North Carolina Museum of Natural Sciences), Dr. G. Thomas Watters (Ohio State University, Museum), and C. A. Mayer (Illinois Natural History Survey), the database is a work in progress. Users are encouraged to notify the authors of errors and omissions. Supported by a grant from the National Fish and Wildlife Foundation.

Freshwater Bivalves of the World: This is a searchable database of the freshwater bivalves assigned to 19 families living around the world including distribution by eco-regions. This was the basis for the paper: Bogan, A.E. 2008. Global diversity of freshwater mussels (Mollusca, Bivalvia) in freshwater. Hydrobiologia 595:139-147. This is part of the Freshwater Animal Diversity Assessment project which is based in Brussels, Belgium. 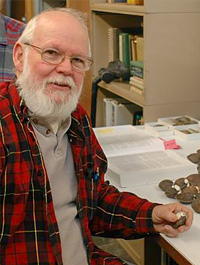