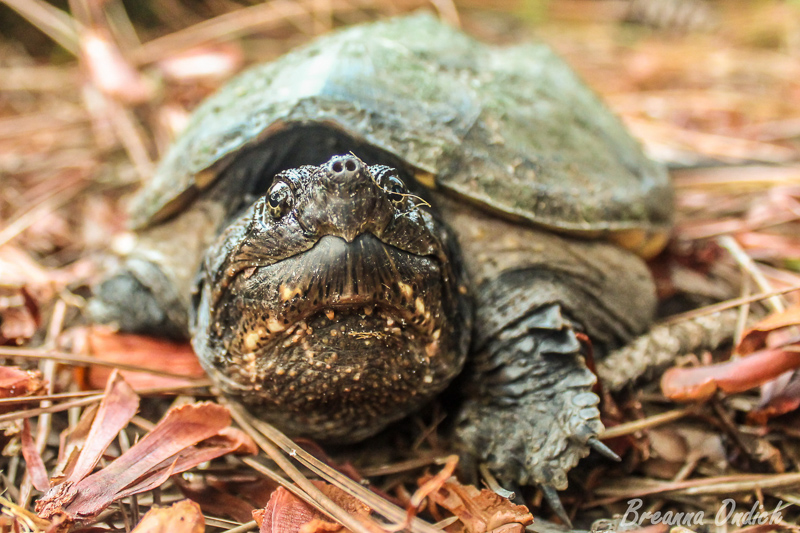 In January 2022, the largest Common Snapping Turtle (Chelydra serpentina) known from North Carolina passed away after spending the last decade of its life at the NC Museum of Natural Sciences. Hearing about its death made me recall a memorable experience I had with a snapping turtle in 2019. While riding my bike around Wilmington, I saw a large object in a nearby pond. I pulled over and realized that it was a Common Snapping Turtle. The turtle was marked with scars and must have had a long, eventful life. The encounter rekindled my childhood love of turtles. Shortly after, I visited the NC Museum of Natural Sciences and observed the record-setting turtle on display. I was lucky to get a glimpse of the animal before it passed away. It was a reminder about how big these creatures can get and how they should be treated with respect, as they play an important role in North Carolina’s ecosystems. 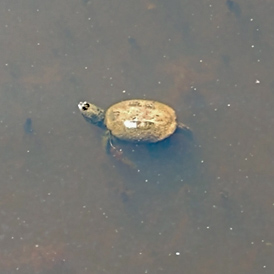 Common Snapping Turtles are smaller, but more widespread, ranging across most of the eastern US and into parts of Canada. While alligator snappers lurk at the bottom of the water, common snappers are more active predators. They swim in shallow rivers and ponds hunting for fish and are assisted by a snake-like neck that extends up to half its body length to catch their prey.

Common Snapping Turtles are crucial to their local ecosystems as both predator and scavenger. Being opportunists, these reptiles feed on anything they can snap their jaws into. They primarily eat fish, frogs, insects, aquatic plants and other reptiles. They are more than willing to feed on carrion given the chance.

Despite their reputation for being aggressive, they only display this orneriness when they are on land. While in the water they usually swim away from danger. Unlike some other turtles, common snappers can’t fully tuck their head and limbs inside their shells. Their aggression is a defense mechanism to compensate for these vulnerabilities. 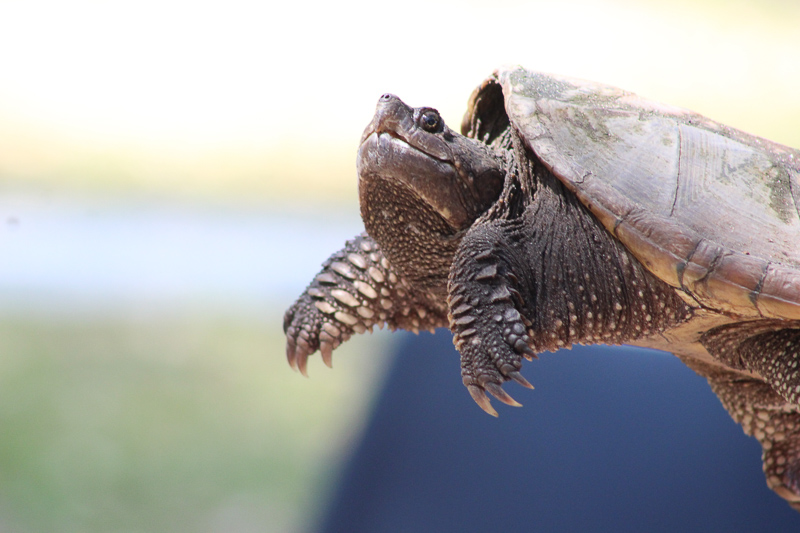 Snapping turtles should only be handled by professionals. Photo: Brianna Ondich.

Snapping turtles typically come to land to find new waterways, look for mates or lay eggs. This is when they are most frequently encountered by humans and when conflicts may occur. People without experience handling these creatures often underestimate how long and flexible their necks are. Their jaws are powerful enough to severely injure a finger. Considering the numerous bacteria that live in their environment, the risk of infection from such a wound is also high. If you encounter a snapping turtle, give it space and it will likely move along its way. If the turtle must be moved, try using a shovel to relocate the animal.

Most land encounters occur in the spring when turtles are looking for mates or laying eggs. On average, females lay 25 eggs, however clutches of 80 eggs have been recorded. The fate of most hatchlings is grim; few survive to adulthood. Laying dozens of eggs ensures that at least some hatchlings survive. As juveniles they are vulnerable to animals like alligators, birds and otters. When they reach a certain size, they have no natural predators. 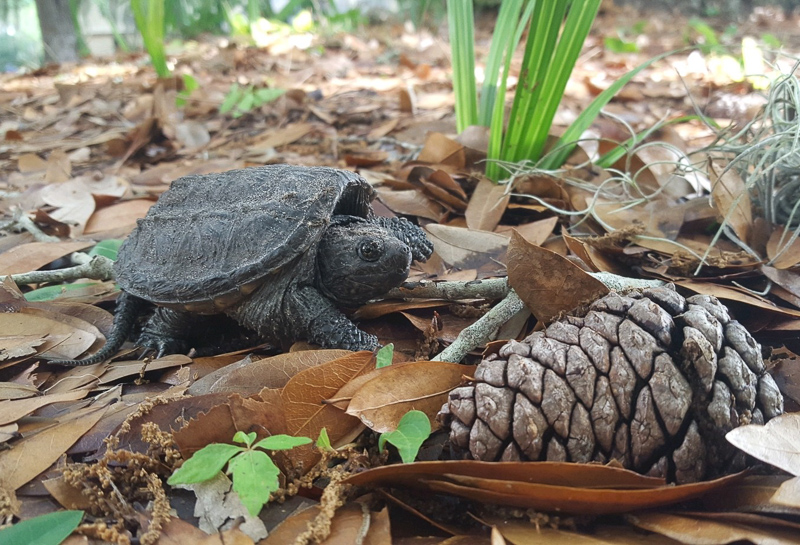 Hatchlings are most vulnerable to predation Photo: Brianna Ondich.

In terms of conservation status in the United States, the Common Snapping Turtle is labeled as “Least Concern.” In North Carolina, they are widespread and common. Despite the Least Concern label their numbers have declined over recent decades. The main threat comes from habitat loss, the pet trade and road mortality. Females are especially vulnerable as they can be hit by motor vehicles while crossing roads in search of nesting sites. Snappers are also hunted for their meat and eggs, which is made into turtle soup, and considered a delicacy in some states. These hunting pressures have resulted in further declines. 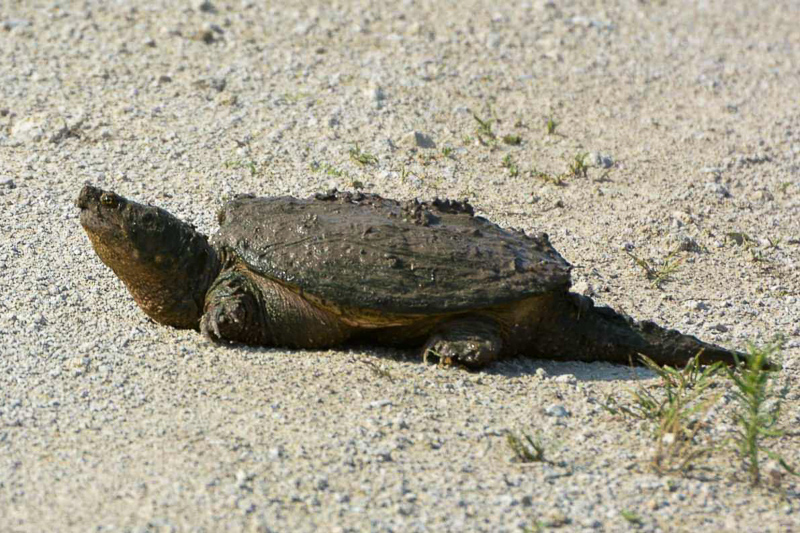 Roads are one of the biggest hazards for snapping turtles. Photo: Lance Paden.

Fortunately, snapping turtles are still commonly seen in the wild. I’ve been lucky to have several encounters in the wild with this species; encounters that have fostered a deep respect for these underappreciated mud monsters. If you can’t find one of these turtles in the wild, visit the downtown Raleigh location of the NC Museum of Natural Sciences. The passing of the Museum’s record turtle was a sad loss, but thankfully he was not the last. The Museum has another Common Snapping Turtle currently on display so that guests can get an up-close glimpse of this remarkable species.