The recent spread of coyotes across North America did not doom deer populations, new research finds

Coyotes eat deer, but not enough to limit the deer population at a large scale. A new study of deer numbers across the eastern United States has found that the arrival and establishment of coyote predators has not caused the number of deer harvested by hunters to decline.

“With wolves and cougars extinct in most of the eastern U.S., white-tailed deer have become abundant, sometimes overabundant.” says Roland Kays, wildlife biologist at the North Carolina Museum of Natural Sciences and North Carolina State University, and co-author of a paper describing this research. “Coyotes moved in as the new top predator of the East, but they aren’t nearly as effective deer hunters as wolves, so there’s been a lot of controversy about whether these medium-sized predators can really limit deer populations at large scales.”

Previous studies of how coyotes might be affecting deer populations have produced inconsistent results. Some experimental removals of coyotes found that fawn survival increases following coyote removal, but others have shown no effect. Kays and a team of researchers led by Eugenia Bragina from NC State surveyed deer population trends from 1981 to 2014 using data from 384 counties across six Eastern states. “Our study is unique because it’s the first to link coyote presence to changes in deer population at a large scale,” Bragina says. “Getting the big picture of the interactions between these species helps inform the management practices of these species by hunting agencies.”

The researchers collected county-by-county data on coyote arrival by assessing museum collections and deer population numbers by tracking hunting records from state wildlife agencies. They evaluated these data for changes in the number of deer harvested after coyote arrival and establishment in an area, while accounting for environmental differences like climate and landscape. They found that the number of harvested deer in all states generally increased over time, and that there was no consistent crash in harvest numbers following coyote arrival. They concluded that coyotes are not controlling deer populations at a large region-wide scale in eastern North America.

“We see direct evidence of coyote predation on deer when looking at coyote scat or even spotting them with camera traps carrying off deer fawns,” says Chris Deperno, a co-author on the study from NC State. “Though coyotes are known to kill adult deer, predation is focused primarily on vulnerable individuals that are sick, injured or in late stage pregnancy. Predation of healthy adults is uncommon.”

The researchers caution that this species interaction could potentially change as coyote numbers are still on the rise across the eastern U.S. It is unknown whether coyote populations will increase in number or density enough to influence deer populations in the future. Human-induced changes in habitat quality or landcover may also influence how these species interact.

Management efforts to increase deer population sizes involving coyote removal, the researchers advised, are unlikely to be effective at large scales or over long periods of time. “Coyote removal as a method of increasing deer abundance is expensive and labor-intensive,” Bragina says. “We hope that this research leads to more acceptance of this carnivore by people. Coyotes are here to stay.”

The paper, “No region-wide effects on white-tailed deer following eastern coyote colonization,” is published in the Journal of Wildlife Management and Wildlife Monographs. Allison Hody, Christopher Moorman and Christopher Deperno from NC State, as well as L. Scott Mills from the University of Montana, co-authored the research.

The work was done with support from the Fisheries, Wildlife and Conservation Biology Program at NC State. 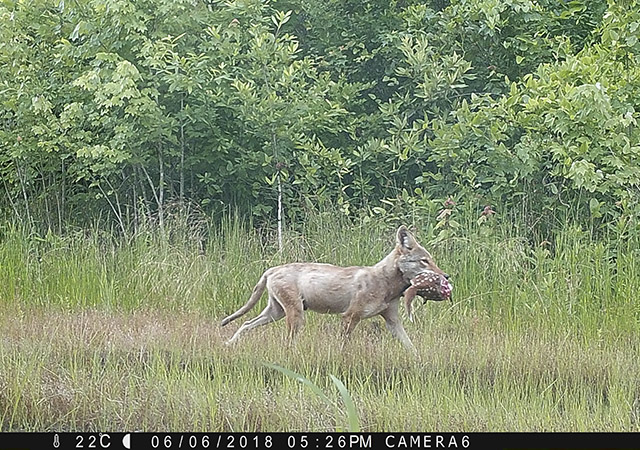 Abstract: The expansion or recovery of predators can have dramatic effects on local prey populations. Since the 1940s, coyotes (Canis latrans) have expanded into eastern North America where they are now the largest predator and will prey on white-tailed deer (Odocoileus virginianus). However, their effect on deer populations remains controversial. We tested the hypothesis that coyotes, as a novel predator, would affect deer population dynamics across large spatial scales, and the strongest effects would occur after a time lag following initial coyote colonization that allows for the predator populations to grow. We evaluated deer population trends from 1954 to 1996 in 384 counties of 6 eastern states with linear mixed models. We included deer harvest data as a proxy for deer relative abundance, years since coyote arrival in a county as a proxy of coyote abundance, and landscape and climate covariates to account for environmental effects. Overall, deer populations in all states experienced positive population growth following coyote arrival. Time since coyote arrival was not a significant predictor in any deer population models and our results indicate that coyotes are not controlling deer populations at a large spatial scale in eastern North America.