One in a million: Kammerer’s lucky break leads to new species discovery

“Paleontological discoveries come from a combination of dedicated planning, expertise, and good old-fashioned luck,” explains Dr. Christian Kammerer, the Museum’s research curator of paleontology. This was particularly true during a recent expedition to Brazil, when a timely flat tire led to his discovery of a new genus and species (Karutia fortunata) that also happens to be the first representative of a group of prehistoric reptiles (called acleistorhinids) ever found in South America. 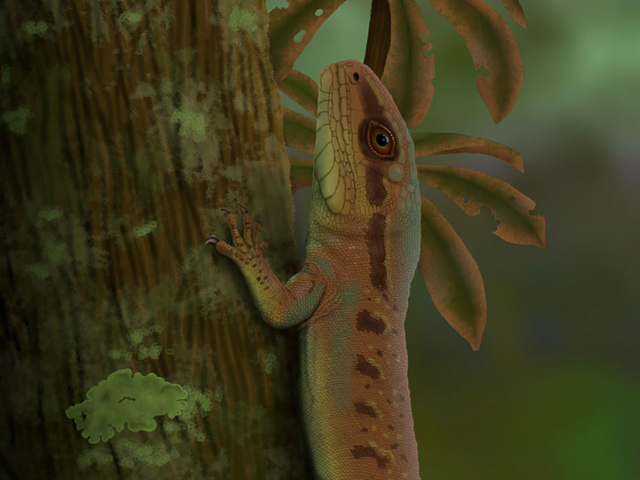 What Karutia fortunata may have looked like when alive. Art by Juan Cisneros of the Universidade Federal do Piauí. Click to see full illustration.

Over the past decade, Kammerer has done extensive fieldwork in northeastern Brazil, just south of the equator, typically looking for fossils in rock quarries in areas otherwise thickly covered by jungle. These are not industrial-size quarries that you might see in the U.S., he notes, but rather, smaller scale sources of building stone for local residents. 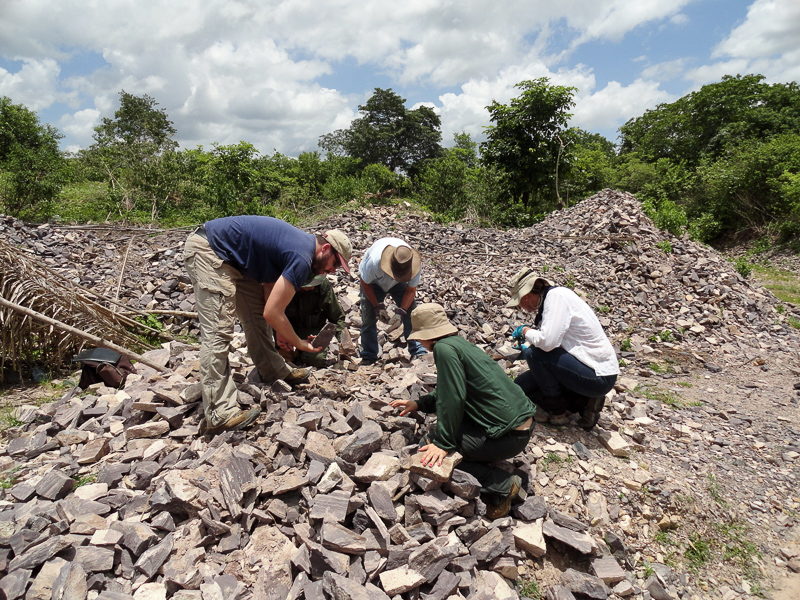 Most often, Kammerer would focus his search on the dark purple mudstones found in early Permian (~270-275mya) deposits, representing an aquatic environment, and producing mostly fish and amphibian skeletons. Over time, he says, he had trained his eyes to find these delicate skeletons, which appear white when first exposed by a rock hammer, or tinged with orange when exposed to the elements.

In 2016, Kammerer and colleagues were driving out of one of these quarries when their truck’s tire caught on a rock and popped. Although the quarry had already been exhaustively searched for fossils, with nothing else to do, he decided to go through it a second time. But this time, he expanded his search to looking at sandstones — a rock type that had never produced fossils in these quarries. To his great surprise, it looked like there were teeth and vertebrae poking out of one sandstone block, and upon closer inspection, “sure enough, there was the skeleton of this new reptile.”

A reconstruction of the preserved portion of the fossil skeleton. Click to see full image.

Acleistorhinids were small, lizard-like reptiles that probably ate insects and other small prey. Previously, they were known only from late Carboniferous and early Permian rocks in the United States. Kammerer notes that this discovery indicates that there was substantial overlap in faunas between continents at this time. “What we are finding in these fossils from the Parnaíba Basin of Brazil is a mixture of the sorts of animals typical of early Permian rocks in the American Southwest and the southern hemisphere fauna better known from later Permian rocks found elsewhere in South America and Africa.”

In the recently published paper describing the new species, Karutia fortunata is interpreted as an agile, sprinting animal, which likely helped it catch prey as well as avoid predation by larger carnivores.

As for the name? Karutia derives from a word meaning “rough-skinned” in Timbira, an indigenous language of the region, because the specimen’s skull bones are covered in tubercles and ridges. Fortunata is, of course, “lucky” in Latin.