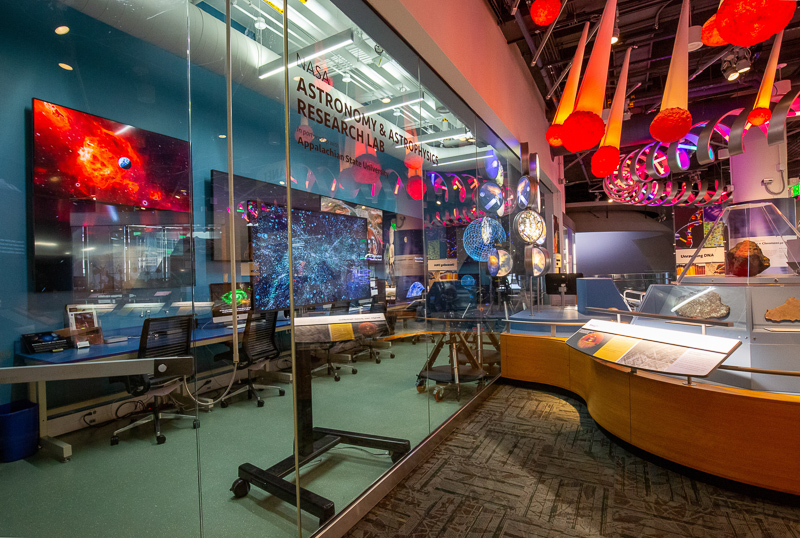 By Dr. Rachel Smith, Head of the Astronomy & Astrophysics Research Lab and Curator of Meteorites

The Astronomy & Astrophysics Research Lab, located at the Museum’s downtown Raleigh location, recently got a makeover! The Lab is now outfitted with new high-resolution displays and a new paint job in spacey blue.

Adjacent to the Museum’s meteorite and astronomy-themed exhibits on the third floor of the Nature Research Center, this Lab brings cutting-edge research and the beauty of the cosmos to visitors just beyond its floor-to-ceiling windows. While standing next to an iron meteorite — the core of a failed planet — you can find highlights of current research conducted by its resident astrophysicists: Dr. Rachel Smith, Head of the Lab and Curator of Meteorites, who investigates forming stars and planets and how they connect to meteorites and carbon chemistry; and Dr. Patrick Treuthardt, Assistant Head, who studies the evolution of galaxies, including their forms, structures, and connections to dark matter. 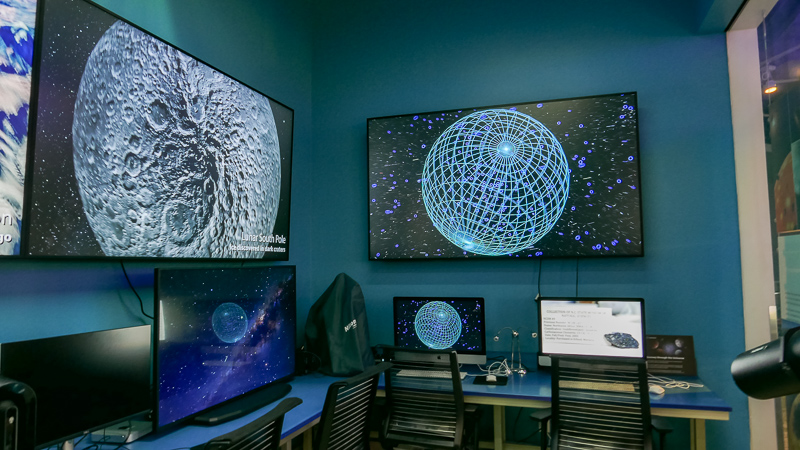 A favorite theme in the Lab is connecting our journey beyond Earth with the search for life in the universe. This image shows a rendering of Earth’s radiosphere (center) — the distance humans have sent signals out to space, a mere ~100 lightyears — juxtaposed with the lunar south pole (adjacent wall). Photo: R. Smith/NCMNS.

Large-screen tiles on the Lab’s walls take visitors on a journey from Earth to our local planetary neighbors, and out to the edge of the visible universe, making various stops at planetary surfaces and celestial bodies, all rendered from real data from satellites and space missions. Using new interactive, open-source software called OpenSpace, the Lab showcases thematically linked video clips, presenting a unique visual digital narrative — selected snapshots of our cosmic address which are rendered in spectacular detail by OpenSpace. At times you’ll find my undergraduate students working in the Lab to learn the software, record videos and create stories through imagery. These interns are an integral part of how the Lab connects the public with ongoing science, research, and discoveries.

View a short clip showing a few of the OpenSpace visuals on display:

The NASA-funded OpenSpace project is led by the American Museum of Natural History in New York City, with NCMNS as one of five funded museum planetariums across the country. Developers and programmers regularly update the software with new datasets and the latest visualization algorithms so that users continually have a dynamic, current and authentic toolbox for exploring their universe.

Most recently, the Lab teamed up with the Museum’s Exhibits & Digital Media group to create more interactive space-themed experiences just outside the Lab’s doors. Four new thematic, user-driven video kiosks exhibit a selection of on-demand OpenSpace videos that take visitors from the planets to the stars. A second exhibit tells the story of the Moon, where guests can watch a video of the Apollo 17 mission. This short film was made by the Lab team using OpenSpace and NASA archival images, and describes the origin of the NCMNS Moon rock. You can also take a peek at our new lunar meteorite in its own colorful lightbox.

Be sure to stop by the Astronomy & Astrophysics Research Lab and see the updates on the third floor of the Nature Research Center!