It was a nice April afternoon to be outside exploring the woods behind my house. I was enjoying some wildflowers when my eye caught the pattern of something partially hidden by leaves and fallen tree branches — a box turtle! I’m always happy to see my first box turtle of the year! 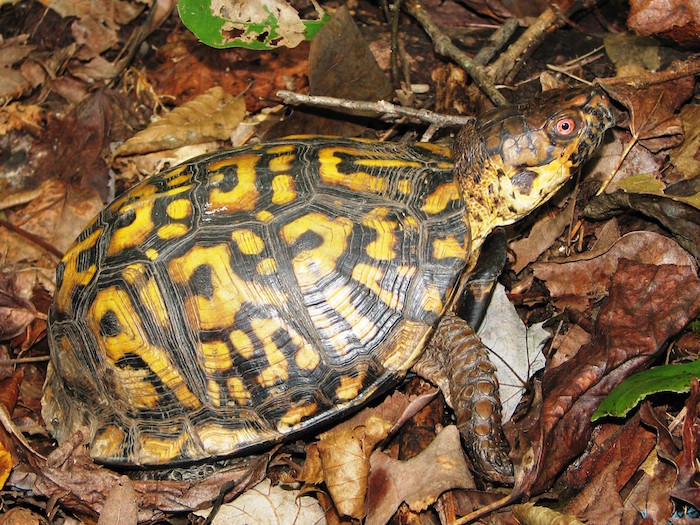 The Eastern Box Turtle, Terrapene carolina carolina, is found in most of eastern North America. They can be found in all parts of North Carolina, from the mountains to the coast. Although it taxonomically belongs to a group of aquatic freshwater turtles, the box turtle has a terrestrial lifestyle. It’s not afraid of the water and can certainly swim, though more clumsily than its aquatic relatives. But it’s much more at home in the forests across the state.

The high dome shell and stubby legs are an adaptation to living on land giving the box turtle a tortoise-like appearance. The flat bottom part of the shell consists of two parts connected by a hinge. That allows the box turtle to completely pull its body into the shell and close it “tight as a box.” This is an important adaptation for living on land since it can’t escape predators by diving into water or swimming away. A healthy adult box turtle can close its shell so tight that it is usually an adequate defense even against the dexterity of a raccoon that would love to pry the shell open for a meal. 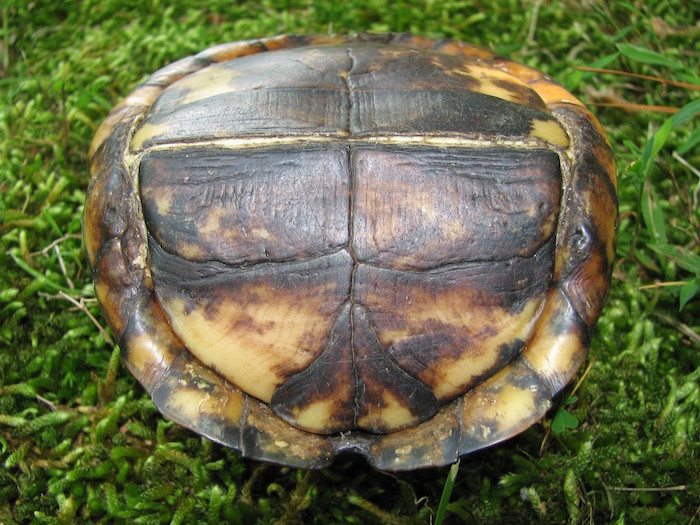 The Eastern Box Turtle was designated as the official state reptile in 1979. This was a good choice since it occurs statewide and is widely recognized by most people in North Carolina. Box turtles can live to be 50 years or more in age, with some documented over 100 years old! Though they can live a long time, biologists are concerned that their population numbers are going down, as we lose or fragment their natural habitats.

I recognize that I am part of the problem. The housing development where I live in Johnston County was originally forest. I can look back in time on Google Earth and see that it was forested until cleared for development in the ‘90s. Some forest fragments were left in the subdivision along with adjoining intact forest areas. Box turtles still live here in their greatly modified home territory. I began systematically documenting the box turtles that I find in my neighborhood in 2008.

I photograph, measure and weigh every turtle that I find. I use the photographs of their shell patterns to identify the individuals. Their patterns are like fingerprints — no two patterns are identical. Thus far I have documented 33 individual box turtles in an area approximately 10 acres, including my part of the subdivision and adjacent forest. They generally are well hidden in the forest. It is mostly luck spotting turtles such as this year’s first one in April. This wasn’t the first time that I had seen this turtle. 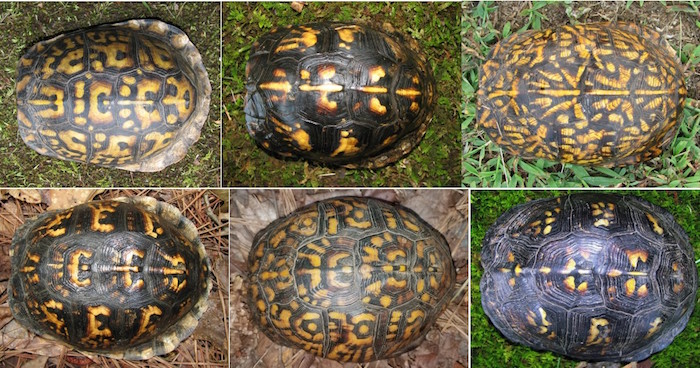 I first saw this box turtle in August of 2015. It’s an adult male, though small for an adult, measuring 4.5 inches and weighing 325 grams. I saw him again in August 2019 and now April of this year. The furthest two sightings of this turtle are only 300 feet apart. Box turtles usually have a small home range of just a few acres and live their whole life in such a small area. My hope is that we can coexist with these turtles in the neighborhood.

If you live in an area with box turtles, you can also document your turtles by participating in the museum’s Neighborhood Box Turtle Watch iNaturalist project. You can find this and other citizen science projects on the Citizen Science section of our website, https://naturalsciences.org/research-collections/citizen-science. 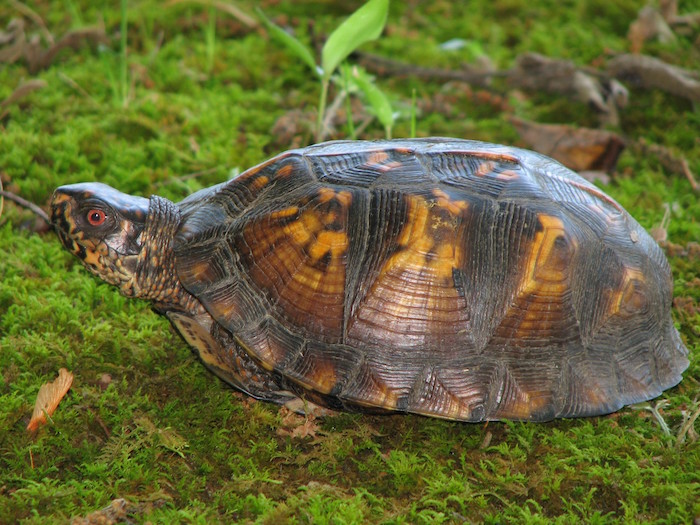 I always worry about “my” box turtles in the neighborhood and the dangers they face, natural and manmade. But I am happy that they are still living wild, as they should. I hope that you enjoy being outside and that you will help make sure that our outside always includes box turtles and all the other wildlife that we share Earth with.