Although the northern pine snake (Pituophis m. melanoleucus) is among our largest and most impressive snakes, comparatively few North Carolinians have ever seen one. State-listed as Threatened, pine snakes occur primarily in our Sandhills region. A small population also occurs in Brunswick and (at least historically) New Hanover counties, and there are a few records from Cherokee and Swain counties in the southwestern Mountains. Powerful, diurnal constrictors, pine snakes feed mostly on mammals and birds. For such large snakes, they are surprisingly secretive, spending much time underground. 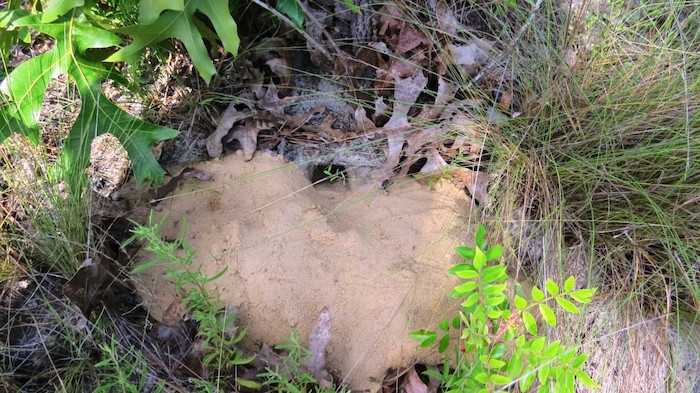 Nesting is a major undertaking for pine snakes. Most of our 19 other egg-laying species just deposit their eggs in decaying vegetation, inside rotten logs or stumps, or beneath sheltering objects, but pine snakes put considerably more effort into the process. A female pine snake excavates, using her only tools—her pointed nose, tipped with its large, heavy rostral scute, and her muscular body—a tunnel between two and five feet long, ending in a chamber large enough to contain her body and her egg clutch. Pine snake eggs are larger than those of any other North Carolina snake (about chicken egg size), and their small clutches (4-12; usually about 7-8) represent a huge investment. A nest may take days to complete, the snake dragging out sand bit by bit and resting periodically. The whole process can take up to a week. The female may rest in the nest chamber for a day or two after laying her eggs, but then abandons them.

A disjunct northern pine snake population in the New Jersey Pine Barrens has been well-studied over the years, but outside that region, the species’ ecology and reproductive biology are less well known. Most nests reported from North Carolina are ones I’ve found by following radio-telemetered females. The several I’ve monitored over the years have had a high hatch success rate (>95%). So, whenever I have a telemetered female out, I always feel excited and fortunate to find her nest and monitor it over the summer. In September I begin checking the nest frequently, hoping to see shed natal skins, which would indicate that hatching has occurred.

Upon finding these (usually in late September or early October—later if I don’t find them), I’ll carefully dig up the nest and collect and preserve the eggshells, documenting the total number hatched vs. unhatched, and record depth and dimensions of the nest chamber. This is good information that’s hard to come by. So far, the nests I’ve found have been deeper, and in more shaded/canopied areas, than those documented in the Jersey Pine Barrens—perhaps because summers are hotter here. In the Barrens, pine snakes sometimes nest communally, and females may reuse old nest chambers from previous years. 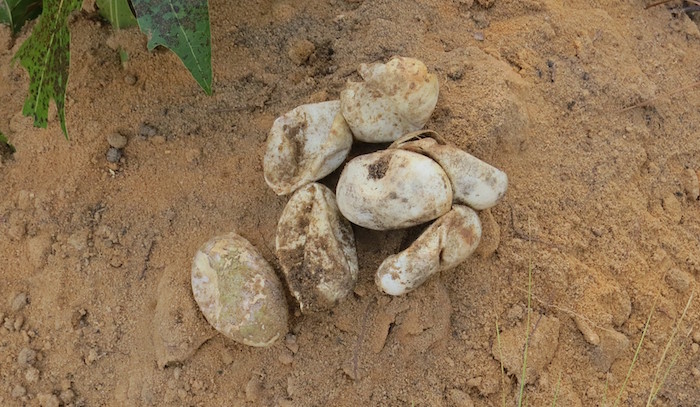 That hasn’t been documented yet in North Carolina, although I’ve known telemetered adults (one male, two females who had previously nested) to enter active nest chambers. Sometimes there are surprises—occasionally I’ve found hatchlings that had emerged, shed their natal skins, and then re-entered the nest. Once I was extremely fortunate to visit a nest just as the hatchlings were emerging—seven perfect babies were concealed beneath leaf litter immediately above the nest (when we excavated it a few days later, eight hatched eggshells were found, so we missed one)! Other surprises are less pleasant, like the severe poison-oak rash you can get from digging up a nest with bare hands, breaking rootlets, and getting sap in cuts and scratches (if you think you don’t react to urushiol, try it sometime). 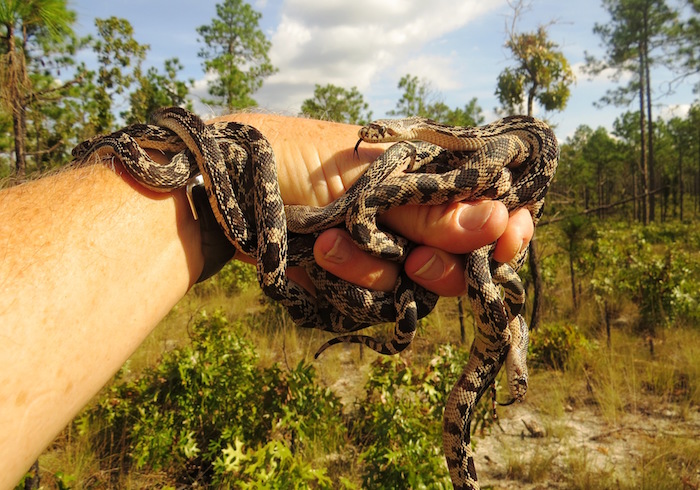 This year, the large female (PM25, aka Dark Lady) that I’ve been radio-tracking for over a year on Sandhills Game Lands in Scotland County, nested right on schedule; I was fortunate to locate her completed nest on 3 July, only about 130 feet from the spot where she nested last year (all seven of those eggs hatched) on almost exactly the same date. But equally exciting, and more unexpected, I was investigating her old nest site from last year (the following day, 4 July) and found what is almost certainly another nest, only a few meters from her 2019 nest and about 140 feet from her current one.

So, hopefully, I have two pine snake nests to check this fall. It’ll be like opening a couple of Christmas presents early.