As I walked down the stairs of my front porch, I noticed some strange squiggly lines on the handrail. The more I looked around, the more I saw the same kind of markings on other objects in my yard, even on the backboard of the basketball hoop! 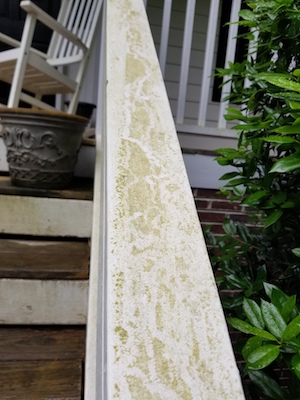 I wasn’t the only one who had noticed these mysterious trails. One of our volunteers had seen these exact same markings on the lid of her garbage can and shared a picture with us. We noticed that these trails were on moss, algae or mold-covered surfaces, and they all had very irregular patterns. Since these kind of trails are frequently found right in our backyard, I decided this needed investigating!

A close look showed repeating patterns, almost like a curved comb carved out by something sharp. After doing some research, I determined that the culprits might be snails or slugs having a feast during their nightly excursions in our backyard. These seemingly random markings were feeding trails created by a special mouth structure they have. 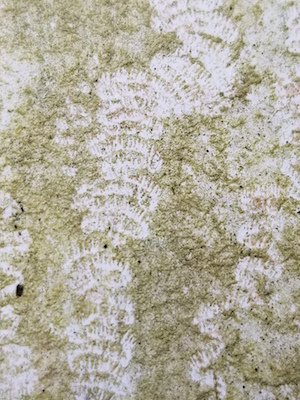 Snails and slugs are members of the phylum Mollusca and belong to the taxonomic class Gastropoda. They are the second-most abundant species on the planet and North Carolina has more than 200 species of native terrestrial gastropods as well as more than 30 introduced species of land snails or slugs.

Some snails and slugs are herbivorous (plant-eaters) and are a gardener’s worst nightmare. Others are carnivores (meat-eaters) or omnivores (eat both plants and meat). They can even consume bits of limestone or shells of other snails, using calcium as the key component to build their own shell. They glide over any type of surface in search for food by means of slimy mucus secreted by glands on the creature’s foot near its mouth. 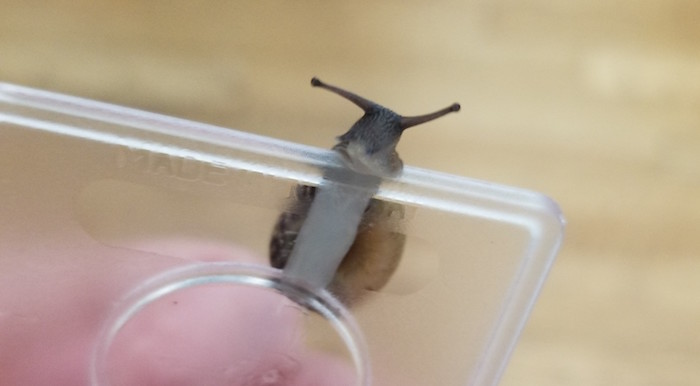 The mouth of a gastropod is located in the anterior (front) area of its foot and opens into a pocket-like buccal cavity (mouth). Those feeding trails mentioned above, are created by a special structure in the mouth-a scraping tongue known as radula (rad- joo-luh). It is similar to our tongue in the sense that it assists snails and slugs in eating their food. The difference is that it is made of chitin (a polymer or long chained molecule made of modified glucose molecules). It functions more like a combination of a chain on a chainsaw and a conveyer belt, moving

food back into its mouth. The radula consists of rows of microscopic tooth-like structures that are curved towards the back of its throat. Muscles move the radula back and forth over the food source, scraping littles pieces of food and transporting it to the back of the mouth into the digestive tract. The mucus secreted by a salivary gland located above the radula lubricates the microscopic little teeth and traps the food particles in sticky mucus that helps to move the food into the esophagus.

Over time, all this scraping action wears these microscopic little teeth down. This isn’t a problem though, since new teeth are rapidly formed in the back of the radular sac and are slowly brought forward to the tip of the radula. The radula itself continuously grows back over the course of the animal’s life, just like our fingernails.

Although the shape and the number of a snail’s and slug’s teeth are characteristic for a specific species, experts still rely on the shape of the shell, the number of whorls, the aperture (see below) on the bottom of the shell as well as the location of the apertural barriers or teeth to identify what species it is. 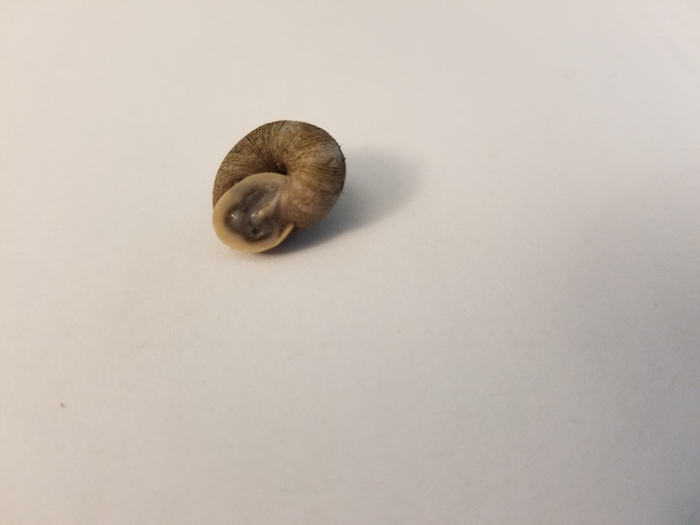 Regardless of what gardeners claim, most snails and slugs cause little damage and are considered beneficial to the ecosystem as they are food for birds, mammals, reptiles and insects. And because their shell is a rich source of calcium, an essential and sometimes limited element in nature, their shells are important to those animals that need it. They are also great indicators of pollution and are able to consume heavy metals such as copper, zinc and cadmium and store it in their tissue.

Some species of land snails are listed as endangered, threatened or special concern by the North Carolina Wildlife Resources Commission. Scientists study and collect data on these and other land snails to monitor their status in the wild. There is still a lot to learn about their place in the ecosystem and their importance in the natural world. Mesoamericans already had a natural appreciation for this group of animals and believed that the whirled shape of the snail’s shell represented the circle of life. This is why they considered the sea snail as the symbol of rebirth and joy.