I welcomed the frequent rains that we had this summer. They nourished the plants, kept my stream flowing and produced magic in the woods behind my house. The magic is the arrival of mushrooms that seemingly appear out of thin air! The truth behind the appearance of mushrooms and other fungi in their varied forms and colors is even more magical than the illusion created on the forest floor. 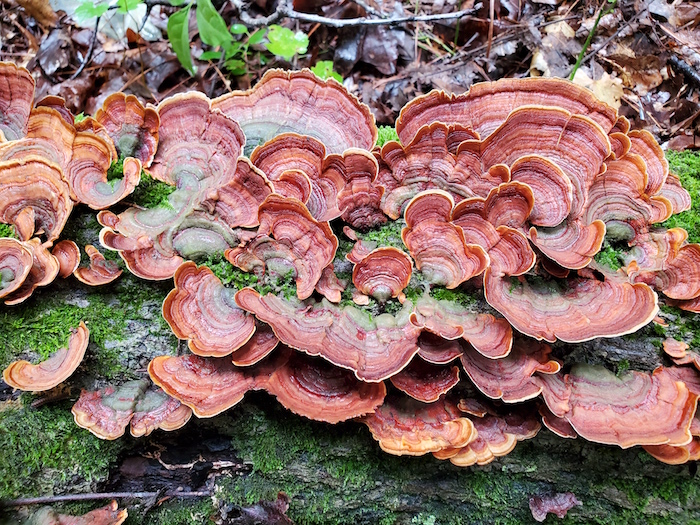 If you walk in the woods, you are walking over countless fungi hidden in the soil beneath your feet or in the rotting logs you step over. Soil is much more than just “dirt.” Soil minerals are mixed with water, air, dead organic matter and a diverse array of living organisms. Fungi are important living organisms in soil. The underground portion of the fungus consists of a network of microscopic, thread-like structures called hyphae. This intricate web of hyphae is referred to as the mycelium, which is the vegetative body of the fungus.

The diversity of fungi is beyond the scope of a few paragraphs in a blog. Some fungi are parasitic, pulling nutrients from plants and other organisms with some cost to the health of the host. Other fungi are decomposers and help break down dead trees and other dead organic matter. But many fungi are in mycorrhizal associations with plants. Mycologists have studied this relationship and find that many plants wouldn’t make it if their partner fungi were not present. The fungus works in partnership with the plant’s roots giving it access to nutrients and water otherwise unavailable to the plant and provides some protection to the plant against pathogens. The fungus receives sugar produced by photosynthesis in the plant. This long-standing relationship has benefitted both plants and fungi. 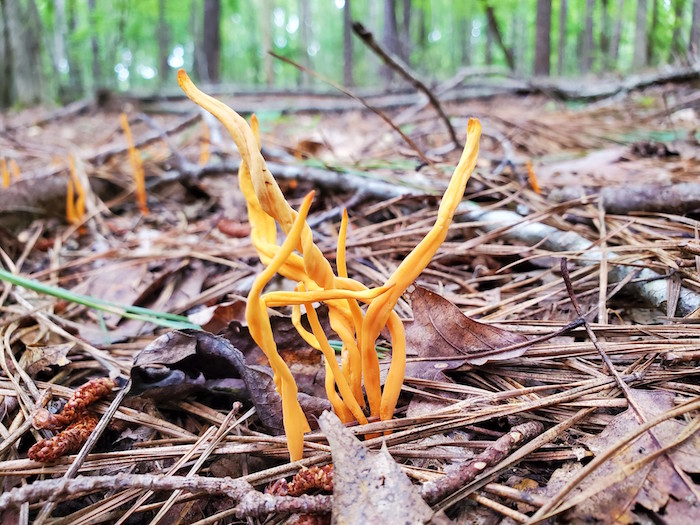 The fungus lives hidden from view much of the time as a usually nondescript web of tissues in the soil. Though it is always doing important business out of sight, when conditions are right the mycelium will produce fruiting bodies such as mushrooms and other forms depending on the species. The fungi make up for their seemingly drab life as look-alike hyphae masses with their incredible and magical fruiting bodies above ground. These fantastic shapes and colors burst through the forest floor for all to enjoy.

North Carolina has about 8,000 species of such macro fungi. There is no field guide that includes them all. Macro fungi are only a small part of our fungal diversity with 80,000 species of fungi estimated in North Carolina alone. Identifying the macro fungi requires a close examination of the fruiting body. Some require microscopic views of the spores they produce, chemical tests or even DNA barcoding to narrow down their identity. It also helps to note what plant or tree (live or dead) that it is in association with, as their relationship may be species specific. 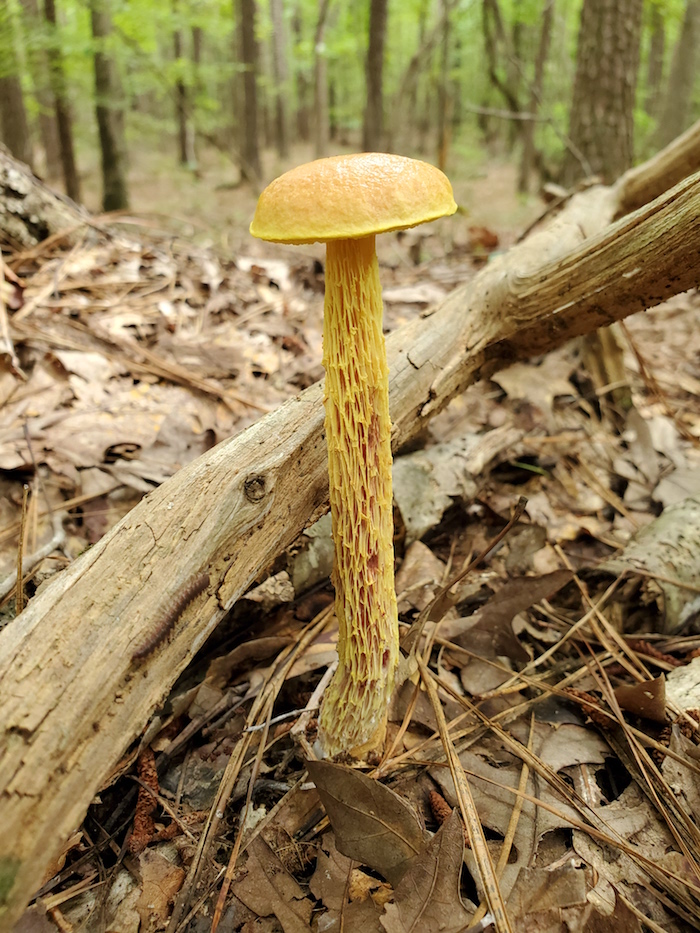 I am not a mycologist, so I accept that I cannot easily identify many fungi to its species. I am quite happy with identifying one to its genus or even to its taxonomic family. That does not diminish the delight of discovery I experience when I walk up on one of the marvelous fruiting bodies of a fungus. I spend much time in the woods on my hands and knees photographing these wondrous forms.

I marvel at why fungi that look so similar in their mycelial form, produce such a diverse and colorful array of fruiting bodies. The purpose of the fruiting body is to produce and release the spores, which will produce new fungi where they land. The form must have some function to maximize that. Why have so many different forms and colors to do basically the same job of spore dispersal is a question that even has mycologists scratching their heads. Many forest animals will eat fungi, and this will disperse spores that pass through their gut. Some fungi contain toxins that are poisonous to some animals when ingested while other animals eat them with impunity. Some mushrooms contain mind-blowing compounds, producing hallucinogenic effects when eaten by humans. There are others that contain compounds of great value for medicinal/pharmaceutical purposes. And let’s not forget those tasty fruiting bodies that are culinary delights! 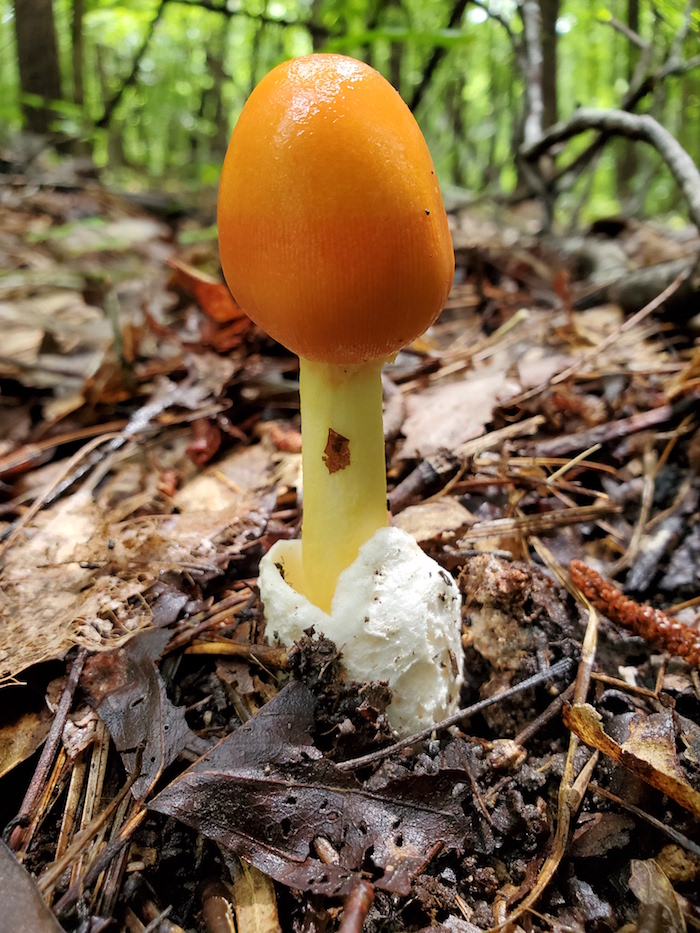 I don’t have all the answers to many questions about the fungi, so I call it magic! Now is a good time to experience the magic for yourself. I challenge you to walk through a forest and discover some of these magical forms! When you see a mushroom or other type of fungal fruiting body, think of how important the fungi are as you walk over their mycelial bodies hidden in plain sight. I hope that you enjoy the magic of mushrooms as much as I do!

Special thanks to Henry Van T. Cotter for sharing his knowledge of fungi over the years and inspiring others to explore our wonderful fungal diversity.