Here’s to the land of the longleaf pine,
The summer land where the sun doth shine,
Where the weak grow strong and the strong grow great,
Here’s to “Down Home,” the Old North State.

Longleaf forests once covered up to 60 million acres in the southeastern US, stretching from southern Virginia to eastern Texas. Early explorers and colonists saw dollar signs when they gazed upon the “endless” forest: a source for all sorts of exportable products. The first major economic driver in North Carolina was the naval stores industry — the production of lumber, tar, pitch and turpentine. 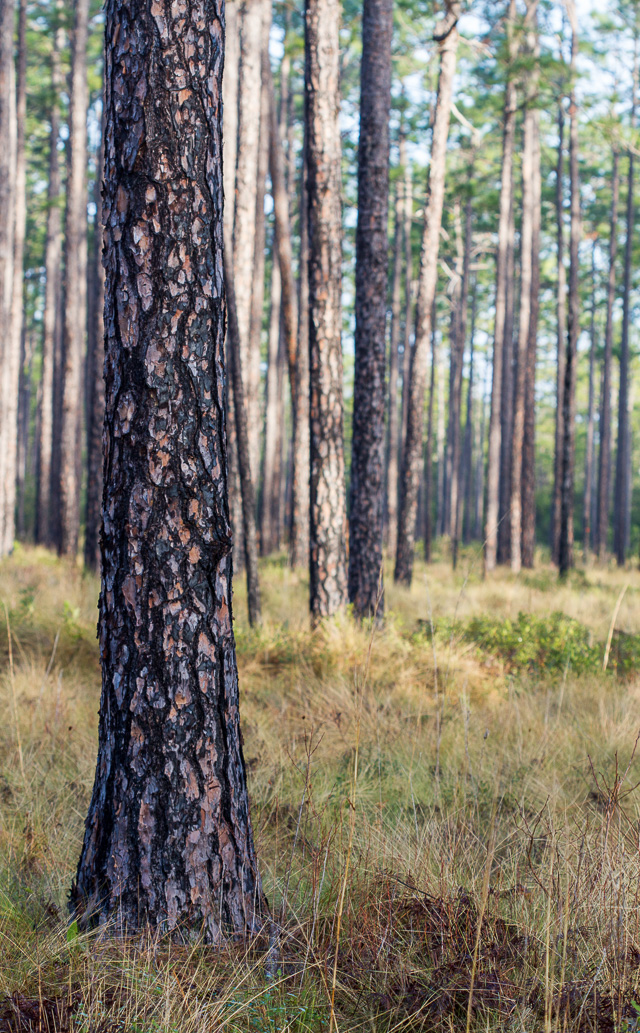 Longleaf grow straight and true, making fantastic masts. Their resinous heartwood, called fatwood or lighterwood, was slowly burned under piles of earth, releasing pungent tar. Tar was boiled to thicken it into nearly solid pitch. Tar and pitch were essential to the sea-worthiness of wooden ships: ropes and sails were soaked in tar, seams in the hull (and pretty much all other wood on a ship) were coated in pitch. The bark of living trees was scraped away, releasing the tree’s natural defense, resin, which was collected and distilled into turpentine. Turpentine had numerous uses, including as a remedy for colds (probably not the best idea). Though the longleaf forest must at first have seemed vast and limitless, after a century or more of harvesting, the once extensive blanket of longleaf pine in the Southeast was reduced to about 3% of its original range. 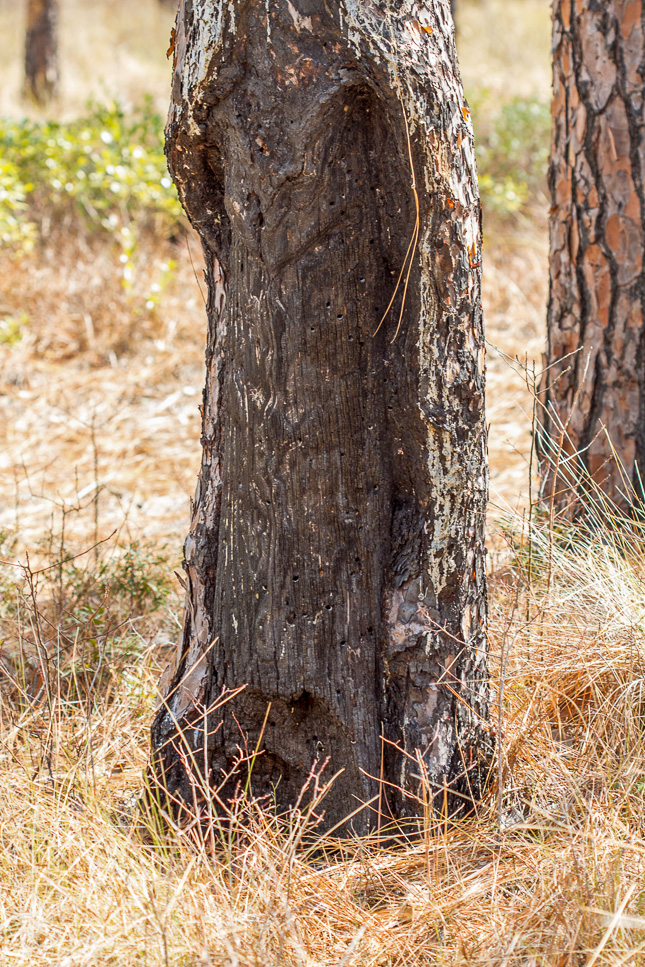 Cat-faced tree in Croatan National Forest; longleaf trees were cut in a distinctive “cat face” pattern to promote the production and allow the collection of resin for distilling into turpentine.

Longleaf is well adapted for poor, sandy soils and thrives in an environment frequently visited by fire. It has some amazing strategies for surviving under those conditions. Longleaf are not tolerant of shady conditions. In a mature savanna, they grow spaced fairly far apart so that each needle on each branch can receive as much sunlight as possible. They lose their lower limbs as they grow larger, and viewed from the ground seem to provide a loose, permeable canopy held aloft by elegantly arranged poles. This openness is one of the reasons that the savanna has such a diversity of low-growing species. The other is fire. Fire clears away other shrubs and trees, like turkey oak and gallberry, that typically grow beneath longleaf pine, and opens the forest floor for shorter species, like carnivorous plants, as well as seedling longleaf. Mature longleaf trees have thick bark that makes them resistant to all but the hottest fires. But with fire occurring every 3 years or so, historically, how would that allow new longleaf to sprout? Well, their growing stages are also perfectly adapted to this sandy, fire-prone habitat. 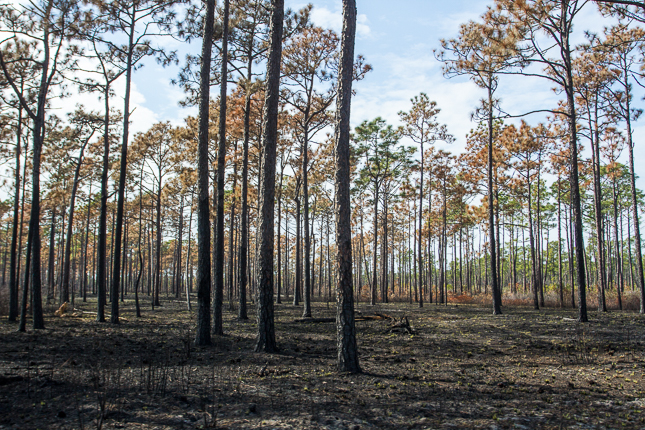 A longleaf seed is most likely to be successful if it germinates in a relatively open area where it receives a lot of sunlight … which is exactly what you would find in a longleaf savanna just after a fire. The seedling develops into a special phase of life, unique to longleaf, called a grass stage. At this stage, the “tree” is just a tuft of needles at ground level that looks very much like the surrounding wiregrass. For a period of around 3 years (sometimes shorter, but sometimes much longer), the longleaf grows downward rather than upward, sending a taproot deep into the soil to fuel future growth. During this stage, it is, perhaps surprisingly, fairly fire resistant. The thick needles protect the all-important growing tip at the heart of the grass stage. Even if the needles are mostly burned, the tree can still make it! 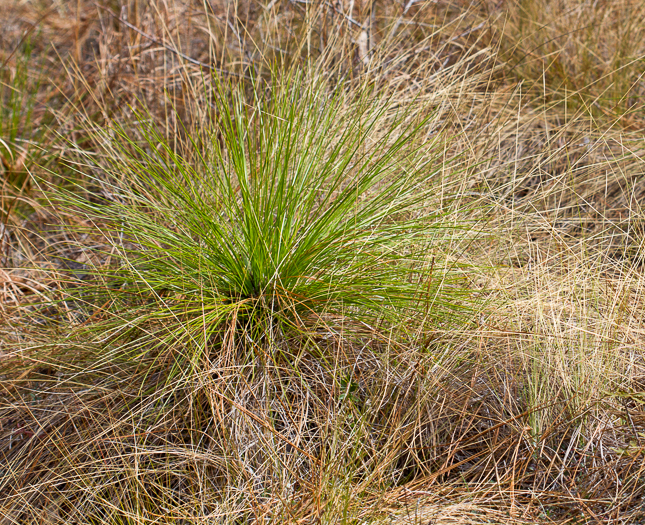 Grass stage longleaf blending in with the surrounding wiregrass.

When the time is right, the longleaf moves out of the grass stage with rapid vertical growth. It develops a thick, white bud-like tip, sometimes called a candle. 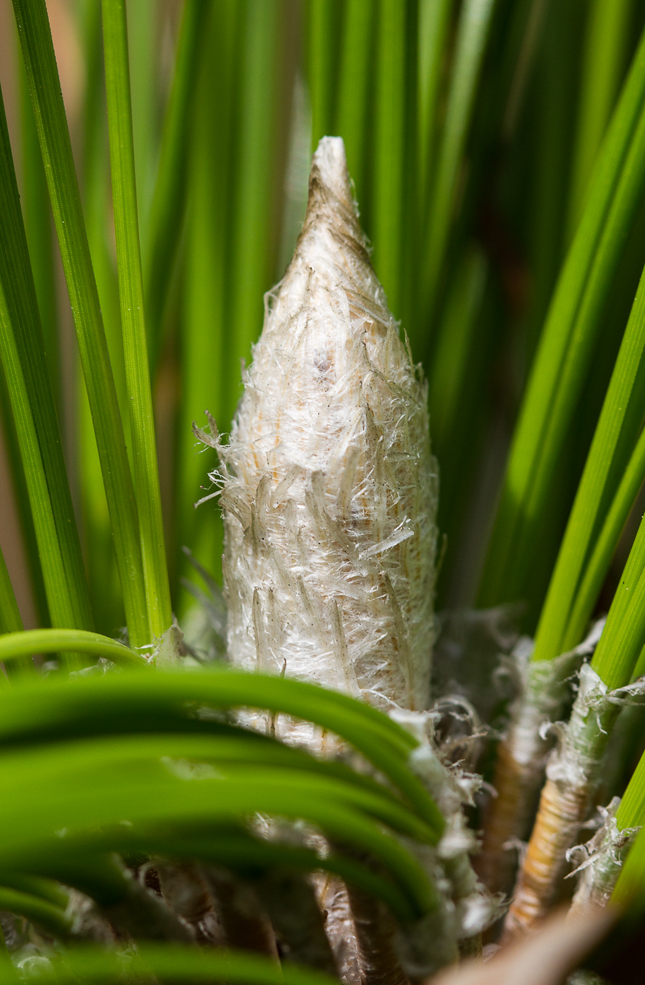 The growing tip or “candle” of a longleaf.

Its goal during this time is to get tall enough and develop thick enough bark to survive a fire. This is no time to worry about branches, so the young tree looks much more like a bottlebrush than anything else; this stage is often called the “bottlebrush stage.” Though an educator on a workshop once suggested that it should be named the “truffula stage” after the crazy-looking multi-colored trees in Dr. Seuss’ “The Lorax.” During this phase, the young longleaf is most susceptible to fire. 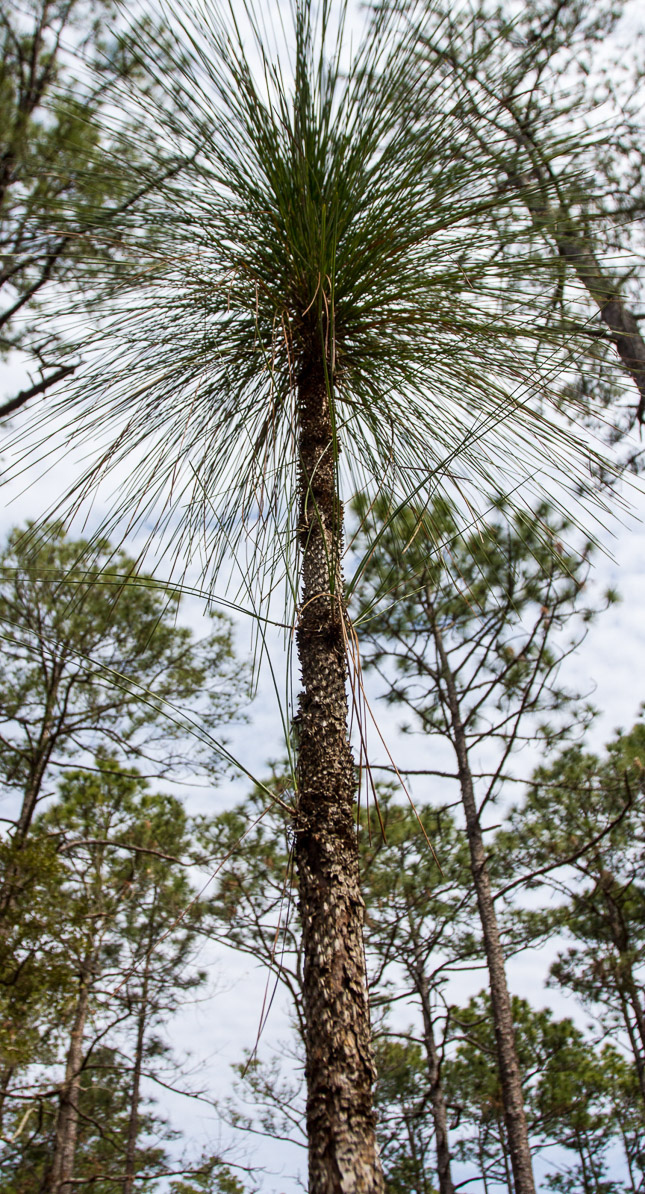 Bottlebrush longleaf striving to grow as tall as its neighbors. 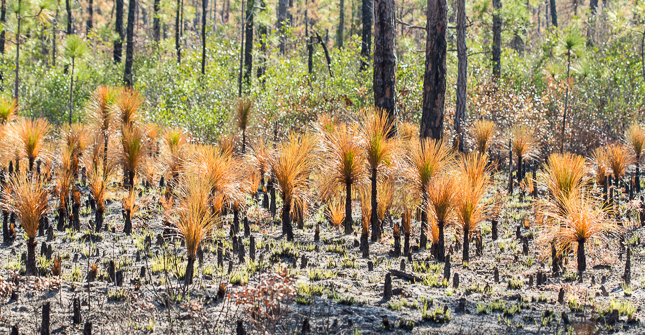 A group of young longleaf burned in a recent fire. Many still have green needles visible in the center.

But a tree can’t just grow up, and eventually the longleaf begins to grow out as well. The graceful side branches reach out horizontally and then turn up toward the sky. The “candelabra” stage is well-named! Longleaf tend to grow their 8-18″-long needles in clusters near the ends of branches, adding to the visual appeal of the tree.

At about 25 to 30 years, longleaf reach maturity and start producing cones. Though the species is fire-adapted, it does not have serotinous cones — cones that open only in the heat of fire. A neighbor to the longleaf, the pond pine, which commonly grows in boggy pocosins adjacent to longleaf savanna, does have serotinous cones. My coworker Megan decided we needed to observe this phenomenon for ourselves; so, armed with a lighter and a closed pond pine cone, we did! With the heat from the lighter, the scales of the cone opened with an audible pop, kind of like the popping of popcorn. Inside each scale were two winged seeds, as with other pines. Pond pines also grow best after fire, so their serontinous cones are a great adaptation to promote growth when the conditions are right. Longleaf pines don’t use that strategy even though they depend on similar conditions for germination. But their cones are equally impressive. The largest pine cones in North Carolina, they can be up to about 12″ long! 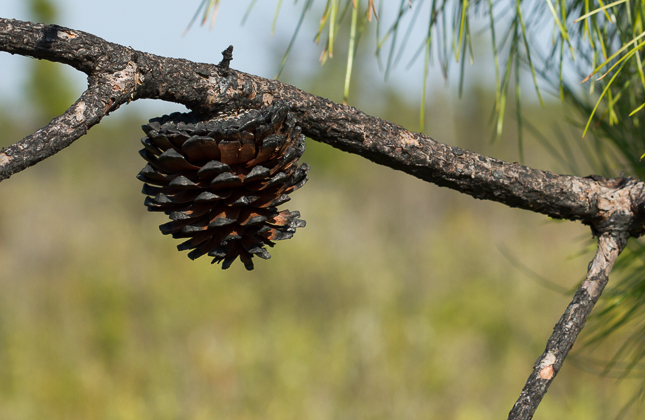 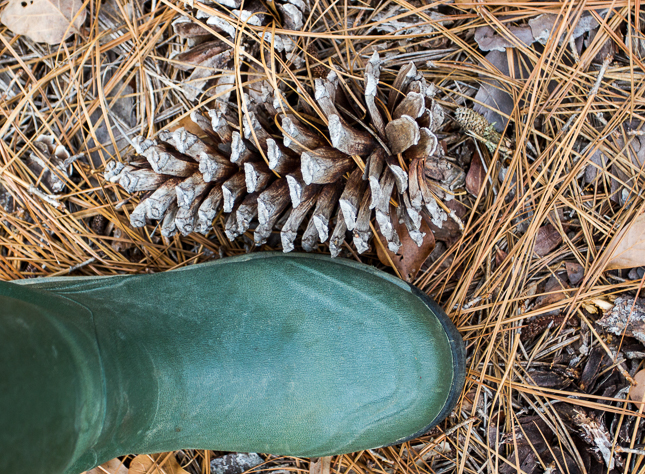 Longleaf cone with my size 9 (men’s 7) rubber boot for scale.

The oldest documented longleaf in North Carolina is located in Weymouth Woods State Park and is more than 465 years old! Though perhaps at one time there were many such old monarchs of the forest, that’s rare now. But mature longleaf play a very important role in the ecosystem, particularly for red-cockaded woodpeckers (RCWs for short). As longleaf age, they become more susceptible to red heart fungus, which softens the dense heartwood of the tree. Red-cockaded woodpeckers are our only species of woodpecker that seek out live trees for nesting, and they prefer mature longleaf pine that are infected with red heart fungus. This is because they hollow out nest cavities in the living trees, and the softening due to red heart makes that easier. They also peck holes in the tree surrounding their cavity that draw out the tree’s sticky resin. This acts as a defense against a common predator: rat snakes. If you’re visiting a longleaf forest and spot trees painted with white rings, look up for the cavity! Biologists studying RCWs mark their nest trees in this way to make them more visible. 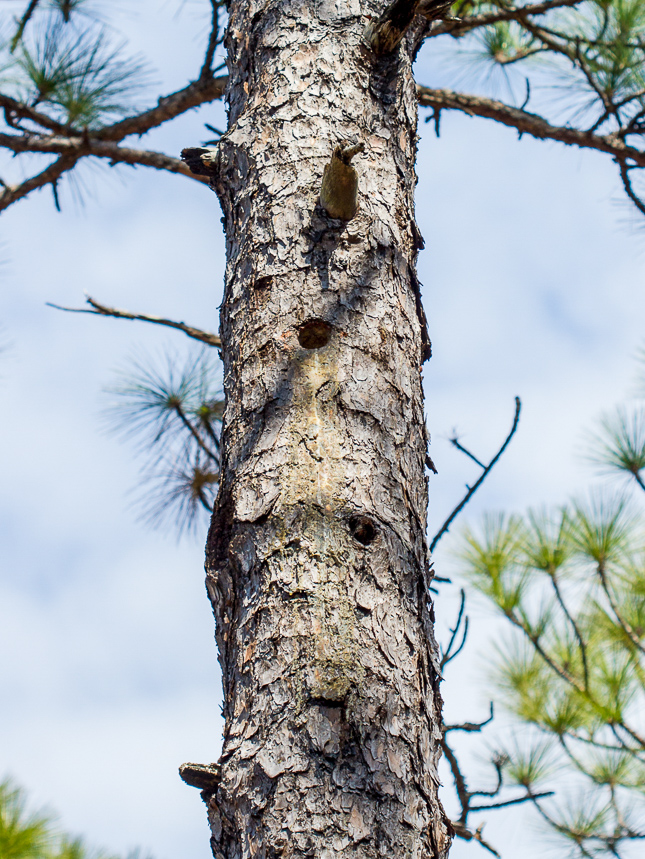 Red-cockaded Woodpecker cavity – this one doesn’t yet have extensive resin wells drilled around it. Often, the tree with be entirely coated with resin around the hole. 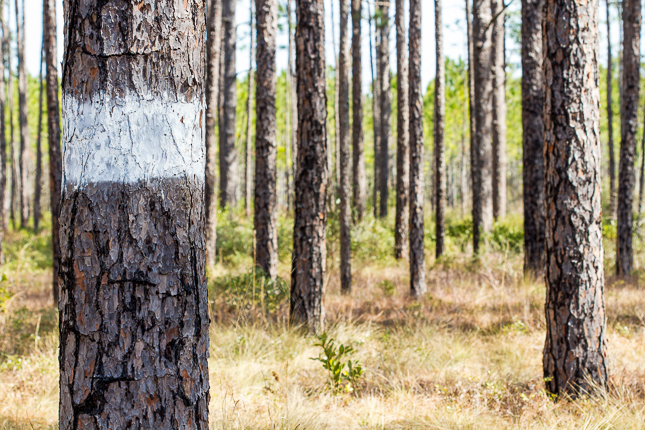 The distinctive white band of a Red-cockaded Woodpecker cavity tree. I like to joke about the endangered woodpeckers who fly around with a paintbrush in their little feet to mark their homes so they can find them again later….

The longleaf pine savanna is an amazingly diverse habitat, and the longleaf pine is well-adapted to live there. If you have the chance to visit, see if you can spot each stage of its life — grass, bottlebrush, candelabra, and mature tree! 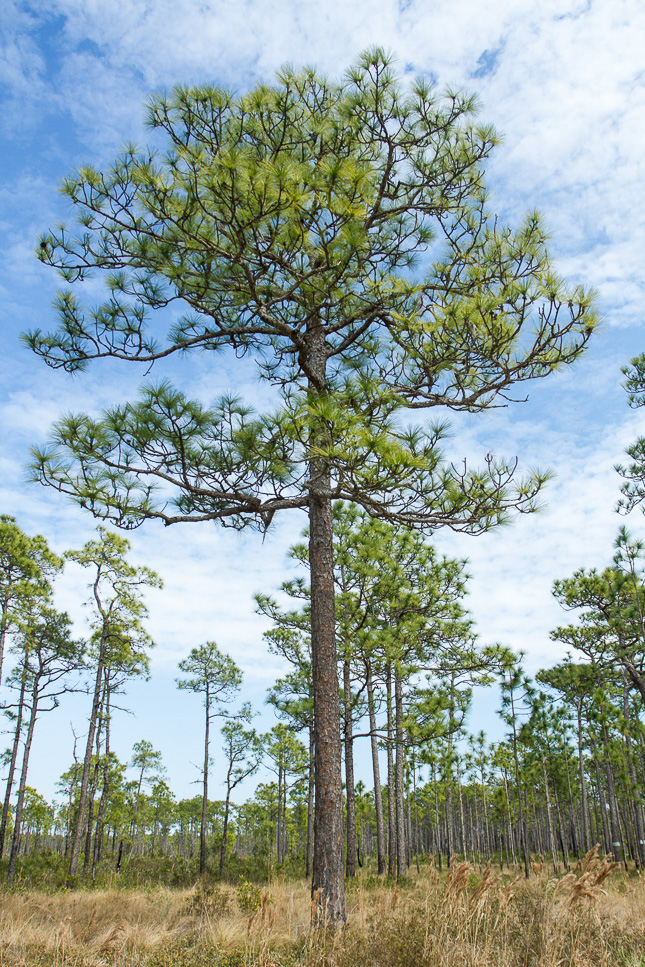