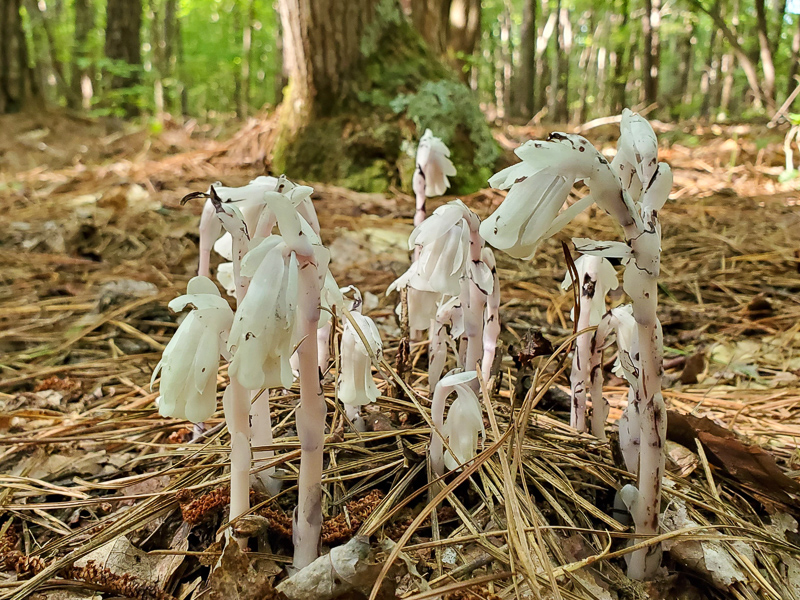 Ghost Pipes and the Sourwood Tree behind them are both in the Heath Family (Ericaceae).

On a September walk through the woods on a dark cloudy day, I made a ghostly discovery! In the distance I could barely make out mysterious white forms appearing from the forest floor. Summoning up my courage, I approached the ghostly group fighting my instinct to run away. I bent down to take a closer look at the ethereal white forms, just a few inches high, penetrating from the darkness below the layer of dead leaves — Ghost Pipes!

OK, so it really wasn’t that spooky. But it was the first time that I had seen Ghost Pipes in the woods behind my Johnston County home. Ghost Pipes (Monotropa uniflora), also known as Ghost Flower, Corpse Plant and Indian Pipes, is a flowering plant in the Heath Family (Ericaceae). If you read my earlier Nature Now blog post on the Sourwood Tree, you know that sourwoods, azaleas, rhododendrons, mountain laurels and blueberries are all members of the Heath Family. Most members of this family are woody plants in the form of small trees or shrubs. But Ghost Pipes have taken a completely different lifestyle and form. They are so different from most vascular plants that many people mistake them for a fungus when they first see them. 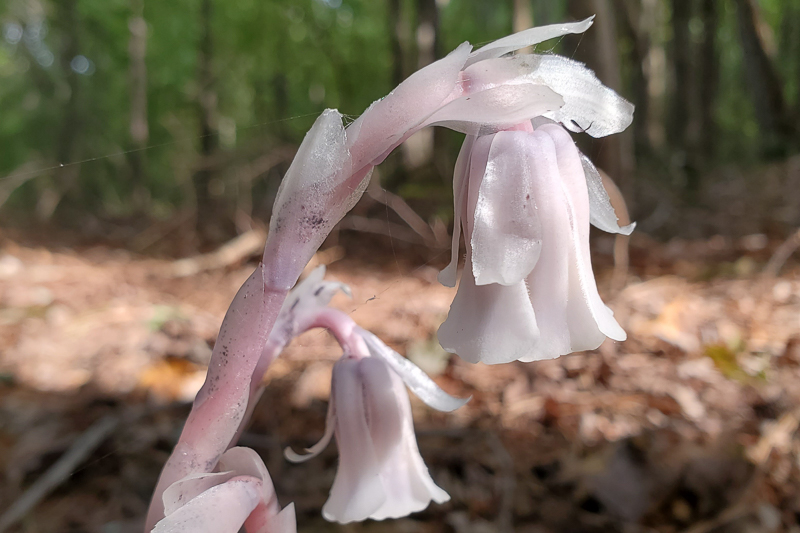 The single nodding flower will eventually rise to an upright position as the plant matures.

Ghost Pipes sprout from the leafy forest floor in summer or fall as translucent white nodding forms usually less than 12 inches high. Though they often grow in clumps, each plant has a single nodding flower at the end of a single stem. All parts of the plant start out in spooky white, though they may later change to pink or red, then black after fruiting. The nodding flower head will eventually rise to an upright position. Clumps of Ghost Pipes from the previous year will be brown and fittingly dead-looking.

Ghost Pipes are white, not green, because they lack chlorophyll. Green plants need chlorophyll to produce glucose from water and carbon dioxide using the sun’s energy in photosynthesis. Ghost Pipes took a very different evolutionary path from their green relatives. They are parasitic on fungi that are in a mycorrhizal association with a tree. The fungus/tree relationship is mutually beneficial, while Ghost Pipes are strictly a third-wheel parasite on the fungus. Ghost Pipes receive food produced by the tree via the fungus on the tree roots. 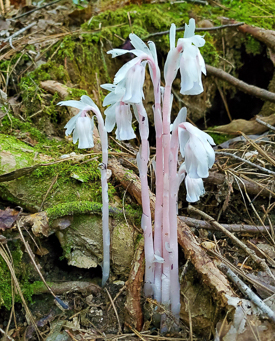 Ghost Pipes may take on a pink or reddish color as they mature.

Ghost Pipes do well under the dark canopy of trees since they do not need sunlight to produce food on their own. They only need to send their ghostly flowers up out of the darkness to attract pollinators so they can produce fruit and ultimately more Ghost Pipes. Barbara Kingsolver sums up this lifestyle choice in this stanza from her wonderful poem, “Ghost Pipes.”

“Once this plant was ordinary heath. Then came the day it renounced the safety of photosynthesis, turned away from the sun’s daily bread for a riskier life, tapping deep strata to drink from tree roots, pulling their blessed sugars straight from darkness.”

I found the Ghost Pipes in mid-September when I was on one of my regular walks through the woods. I was so excited to see them in this patch of woods for the first time after all these years of exploring the area. I took many photographs of this one clump and shared my exciting find on social media so that my friends could enjoy it too. 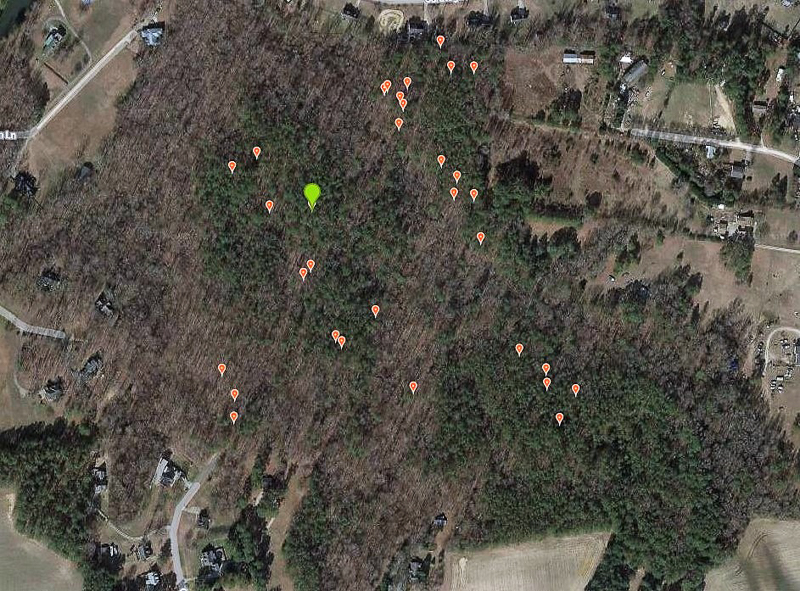 A couple of weeks later my neighbor said he read my post and that he saw some Ghost Pipes in the woods behind his house. When I checked out his woods, I was astonished to see numerous Ghost Pipes scattered among the pines and mixed hardwoods. I counted at least 25 clumps in this small tract of woods. That motivated me to do a more thorough search of the larger tract of woods behind my house. I was surprised to now find hundreds of Ghost Pipes in scattered patches throughout the woods. The woods were haunted! 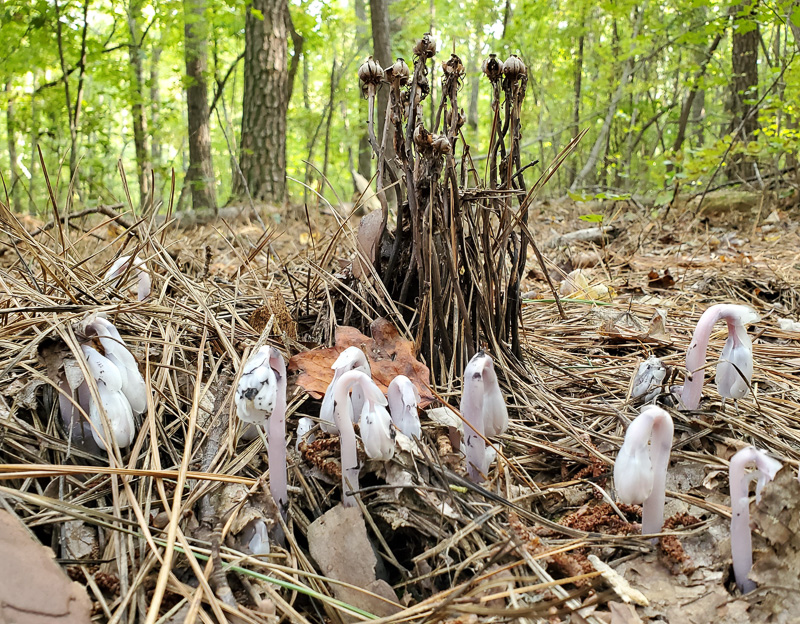 Dried plants from last year with new sprouts coming up in the foreground.

Apparently that first clump of Ghost Pipes was an early riser and sprouted before the rest of the group. How did I miss seeing this plant in all my years of walking those woods? Did I just happen not to walk by where they were when blooming? In my reading I learned that they may only sprout up and bloom when there is adequate moisture after a dry period in the growing season. So perhaps this year, the conditions were just right for all to bloom. Among those hundreds of blooming Ghost Pipes this year, I found only two patches of dried Ghost Pipes from last year. Conditions must not have been as favorable for them last year and perhaps in previous years too.

Now that would be spooky!