Panoramic view from the top of Rich Mountain Bald (within Tater Hill Plant Preserve). Grandfather Mountain and the ski slopes can be seen in the background. Photo: Matt C. Estep.

As a student at Appalachian State University, one of the biggest pastimes I like to participate in is hiking! Taking advantage of the gorgeous views is a cheap, fun way to take a break from schoolwork. Some of the best views of the beautiful Blue Ridge Mountains can be seen from mountain balds along hiking trails. A mountain bald is a high elevation clearing (around 5,000 to 6,000 feet in elevation), usually on a mountain summit, crest or outcrop where there is heavy grass, shrub and vegetation growth, with few or no trees. The phenomenon of mountain balds has been recorded for hundreds of years; trees should grow there, and often grow in the surrounding areas, but they don’t grow on the mountain balds, and scientists aren’t exactly sure why. 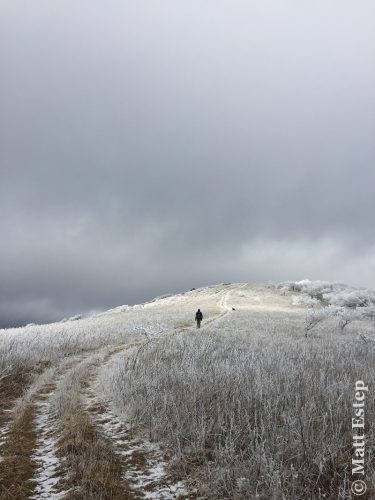 There are many theories about how the unique plant diversity of mountain balds came to be, with the leading hypothesis being that the mountain balds were created and influenced by the grazing habits of prehistoric megafauna, specifically large herbivores during the Pleistocene. The balds were later kept clear and further influenced by Native Americans and early European settlers using them as livestock pastures. Another hypothesis is that some balds could have been of natural origin, since trees are slow to take hold there even without regular grazing or clearing. Some studies are attempting to analyze the soil content to see if it has anything to do with the unique mix of plant species that grow there. No two mountain balds are the same, so the origin of each one could be completely different!

Mountain balds are an important home for a variety of both common and rare plant species that don’t grow well at lower elevations or under dense tree cover. The special geology of mountain balds is also incredibly important in supporting the rare plant life that grows there. The balds in southern Appalachia sit on a rock type called amphibolite, which is mineral-rich and leads to more neutral soil on the mountain balds that supports a wider variety of plant life.

Most mountain balds are characterized by tall grass such as Flattened Oat Grass (Danthonia compressa), which is a common pasture grass throughout the Appalachian region. While the Appalachian mountain balds are blanketed in snow now, spring will bring about many different flowering plant species, such as Catawba Rhododendron (Rhododendron catawbiense), which gets beautiful pink and purple flowers in the spring, and Flame Azalea (Rhododendron calendulaceum) which blooms red, orange, and yellow. 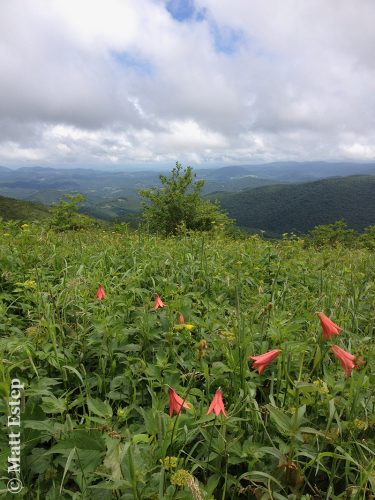 One important Appalachian mountain bald is Rich Mountain Bald, located on Tater Hill in Watauga County, near Boone, NC. Tater Hill is also an NC Plant Conservation Preserve, which is a protected area (not open to the public) that has threatened and endangered plant species growing in their natural habitats. Tater Hill is specifically classified as a high elevation wetland, and also has a mountain bog on the protected land, so it is an incredibly important habitat for many moisture-loving, threatened plant species, such as Gray’s Lily. Gray’s Lily (Lilium grayi) is an endangered wildflower species that only grows at high elevations in moist environments, and it grows particularly well in open meadow-type ecosystems, making Tater Hill and the Rich Mountain Bald a perfect home. Many of the plants on the balds have been growing there for centuries, such as Blue Ridge St. John’s Wort (Hypericum mitchellianum), which has been used historically by Native Americans to treat mental health issues such as depression and anxiety.

Mountain balds are critical for plant diversity and offer an important window into the past. Since there is no regular livestock grazing happening on the balds now, the majority in North Carolina are maintained by park and forest services for recreational use. Max Patch, Richland Balsam, Black Balsam Knob and Andrews Bald are a few mountain balds open to the public and accessible via relatively short hikes on existing trails. These balds are popular destinations because of the unobstructed view they offer of the mountains around them, especially at this time of year. Go visit one and see what you can find!