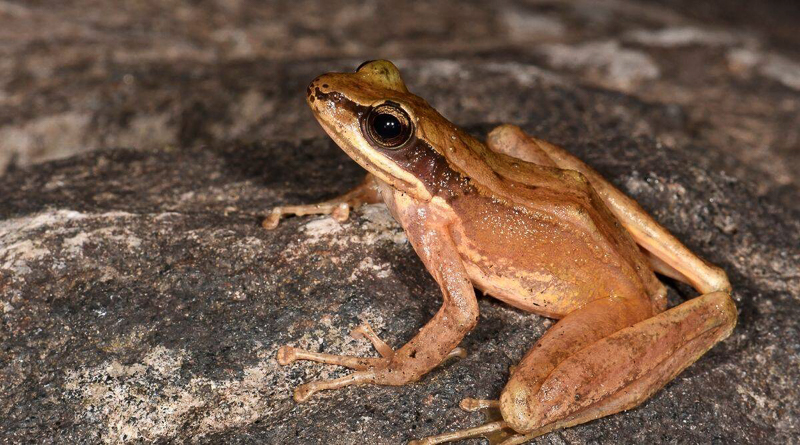 Cascade frogs are named so because of their preference for small waterfalls or cascades in flowing hill streams.

A team of researchers from Delhi University, along with biologists from the Wildlife Institute of India and North Carolina Museum of Natural Sciences herpetologist Bryan Stuart, have discovered a new species of cascade frog in Arunachal Pradesh, India. It has been named Adi Cascade Frog (Amolops adicola) after the indigenous Adi tribe and the hills they inhabit. The literal meaning of Adi is “hill” or “mountain top.”

The findings were published in the Journal of Natural History, London, in a scientific article titled: Phylogenetic position of the poorly known montane cascade frog Amolops monticola (Ranidae) and description of a new closely related species from Northeast India.

Professor S.D. Biju from Delhi University, who is one of the authors of the article, said, “This study is once again a testament of how little is known about the most threatened animal groups, frogs, in northeastern India. Many frogs in this region are reported to occur widely but, in fact, have relatively small geographical ranges and require special attention for conservation before they go extinct forever. Northeast India is a treasure house of species still unknown to science.”

The discovery of the new species was made when the biologists were “investigating a group of medium to large sized Cascade Frogs (scientifically belonging to genus Amolops) from Northeast India over the last five years.”

“The genus Amolops is one of the largest groups of ranid frogs (family Ranidae) with currently 73 known species that are widely distributed across Northeast and North India, Nepal, Bhutan, China, through Indochina, to the Malaya Peninsula,” the researchers said in a statement.

The new species was identified based on multiple criteria, including external morphology, DNA, and calling pattern.

“The study also resolved the century-old taxonomic confusions surrounding the identity of another cascade frog species, Amolops monticola, which was discovered from the Sikkim Himalayas 150 years ago. These discoveries have important implications on the taxonomy and geographical distribution of several other members of this group found in India and the neighboring regions of China,” they added.

Reprinted, in part, from an Indian Express article.