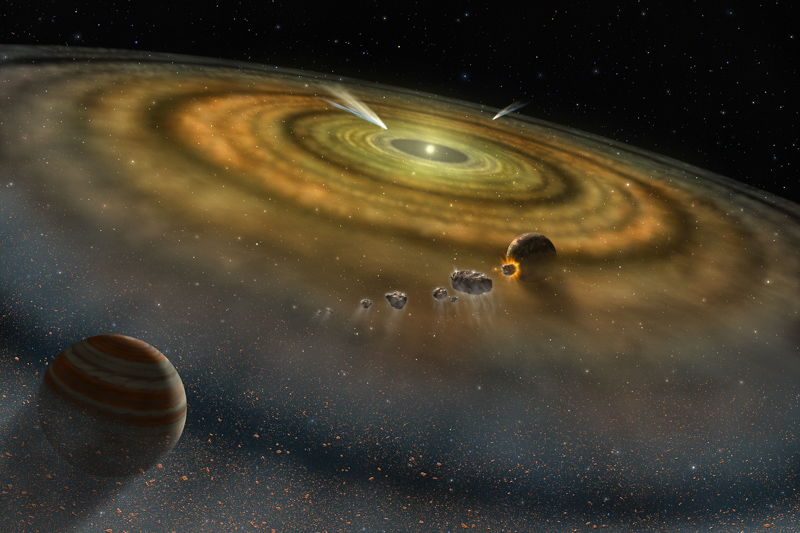 Artistic rendering of a protoplanetary disk around a forming star, in combination with future planets and disk “leftovers”: the asteroids and comets. Disks can take at least one million years to form a planetary system. Credit: NASA/FUSE/Lynette Cook.

How unusual is the Earth compared to other planets in the Galaxy? What are the chemical pathways needed to form a habitable planet? To help answer these questions, Museum astrophysicist Dr. Rachel Smith teamed up with her colleague, Dr. Murthy Gudipati, at the Jet Propulsion Laboratory (JPL) in Pasadena, CA, to conduct experiments on interstellar ice. Using specialized instruments that create extremely low pressures and temperatures (less than –400 degrees F!), they created analogues of interstellar ices found in developing planetary systems throughout the Galaxy, and explored how the ice composition changed as it was slowly heated, mimicking the processes that affect ices in space.

The team’s interstellar ice was comprised of carbon monoxide (CO), the same molecule found in car exhaust. Carbon monoxide is also an extremely important molecule in protoplanetary disks — the vast repositories of gas, ice, and dust found around forming stars throughout our Galaxy. These disks are similar to our solar system when it was forming ~4.6 billion years ago. The ice had different combinations of 12CO and 13CO (which has one extra neutron in the carbon atom), which together make up most of the total CO in protoplanetary systems.

The team’s results, published this week in the journal Astronomy & Astrophysics, show that 13CO has a higher “binding energy” — meaning it is more strongly bound in the ice phase — compared to 12CO. Together, these molecules constitute one of the major reservoirs of carbon in protoplanetary systems.

In addition to lending insight into early carbon chemistry, their results provide a possible explanation for the unusual observations of CO in protoplanetary disks made earlier by Rachel and colleagues. They used powerful spectrometers on large ground-based telescopes, such as the Very Large Telescope (Chile), and the Keck Observatory and NASA’s Infrared Telescope Facility (Hawaii) to observe stars forming today. Their data revealed that the gas in many of these systems is enriched in 12CO compared to 13CO.

These new experiments suggest that this gas enrichment of 12CO could be due to its lower binding energy compared to 13CO, which is bounded more strongly in the ice.

Overall, understanding the precise details of carbon reservoirs will lead to greater insights into the key chemical pathways for Earth-like planets and life as we know it!

The experiments were conducted by two of Rachel’s Appalachian State University students (Lucas Smith and Robert Lewis) when they were undergraduates, during their summer internships at JPL.