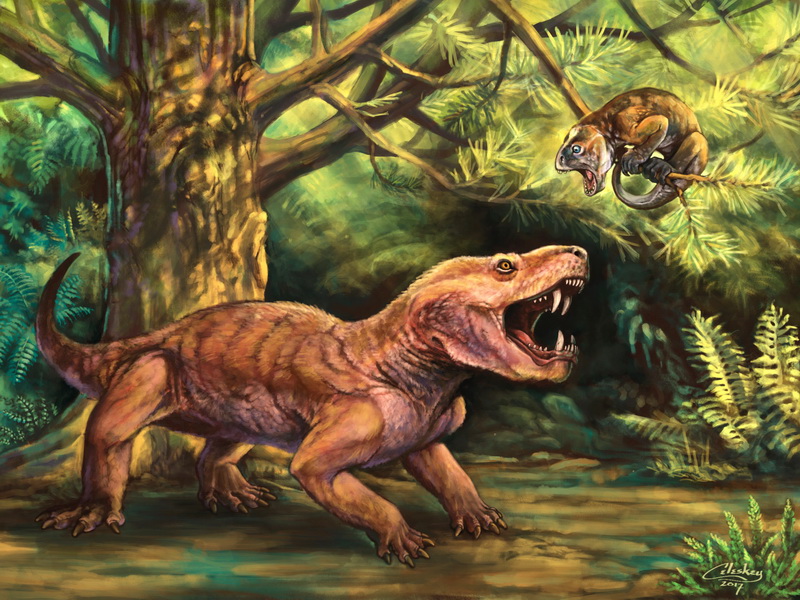 Fossils representing two new species of saber-toothed prehistoric predators have been described by researchers from the North Carolina Museum of Natural Sciences (Raleigh, USA) and the Vyatka Paleontological Museum (Kirov, Russia). These new species improve the scientists’ understanding of an important interval in the early evolution of mammals — a time, between mass extinctions, when the roles of certain carnivores changed drastically.

Living mammals are descended from a group of animals called therapsids, a diverse assemblage of “protomammals” that dominated terrestrial ecosystems in the Permian Period (~299–252 million years ago), millions of years before the earliest dinosaurs. These protomammals included tusked herbivores, burrowing insectivores, and saber-toothed predators. The vast majority of Permian therapsids have been found in the Karoo Basin of South Africa, and as a result, the South African record has played an outsized role influencing scientists’ understanding of protomammal evolution. Because of this, therapsid fossils from outside of South Africa are extremely important, allowing scientists to discern whether observed events in the protomammal fossil record represent global or merely regional patterns.

Recent expeditions by the Vyatka Paleontological Museum have collected a wealth of spectacularly-preserved Permian fossils near the town of Kotelnich along the Vyatka River in European Russia. These fossil discoveries include the remains of two previously unknown species of predatory protomammals, newly described in the journal PeerJ by Christian Kammerer of the North Carolina Museum of Natural Sciences and Vladimir Masyutin of the Vyatka Paleontological Museum. The first of the two new species, Gorynychus masyutinae, was a wolf-sized carnivore representing the largest predator in the Kotelnich fauna. The second new species, Nochnitsa geminidens, was a smaller, long-snouted carnivore with needle-like teeth. Gorynychus belongs to a subgroup of protomammals called therocephalians (“beast heads”), whereas Nochnitsa belongs to a different subgroup called gorgonopsians (“gorgon faces”). 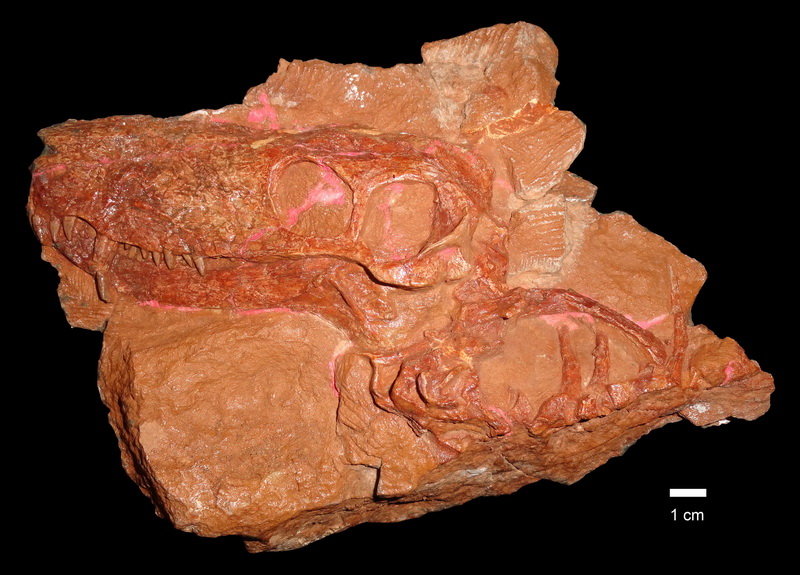 The skull of Nochnitsa geminidens, a new species of gorgonopsian discovered in the Permian of Russia. Photograph by Christian Kammerer. (Click to enlarge.)

Both new species are named after legendary monsters from Russian folklore, befitting their menacing appearances. Gorynychus is named after Zmey Gorynych, a three-headed dragon, and Nochnitsa is named after a malevolent nocturnal spirit. (Based on their relatively large eye sockets, it is likely that Nochnitsa and its relatives were nocturnal.)

Gorynychus and Nochnitsa improve scientists’ understanding of ecosystem reorganization after the mid-Permian extinction (260 mya). Although not as well-known as the more devastating end-Permian mass extinction (252 mya, which nearly wiped out protomammals), the mid-Permian mass extinction also played a major role in shaping the course of protomammal evolution. In typical late Permian ecosystems, the top predators were giant (tiger-sized), saber-toothed gorgonopsians and therocephalians were generally small insectivores. In mid-Permian ecosystems, by contrast, these roles are reversed. At Kotelnich, the saber-toothed top predator Gorynychus is a therocephalian and the only gorgonopsians are much smaller animals.

“In between these extinctions, there was a complete flip-flop in what roles these carnivores were playing in their ecosystems — as if bears suddenly became weasel-sized and weasels became bear-sized in their place,” says Kammerer. The new species from Russia provide the first evidence that there was a worldwide turnover in predators after the mid-Permian extinction, and not just a localized turnover in South Africa.

Kammerer adds, “Kotelnich is one of the most important localities worldwide for finding therapsid fossils — not only because they are amazingly complete and well-preserved there, but also because they provide an all-too-rare window into mammal ancestry in the Northern Hemisphere during the Permian.”

The studies were supported by Deutsche Forschungsgemeinschaft Grant KA 4133/1-1 to Christian Kammerer.

Abstract: The early evolution of gorgonopsians is poorly understood. New material from the Kotelnich locality in Russia expands our knowledge of middle/earliest late Permian gorgonopsians from Laurasia. Two gorgonopsian taxa are recognized from Kotelnich: Viatkogorgon ivakhnenkoi Tatarinov, 1999 and Nochnitsa geminidens gen. et sp. nov. Nochnitsa can be distinguished from all known gorgonopsians by its unique upper postcanine tooth row, composed of pairs of teeth (a small anterior and larger posterior) separated by diastemata. Both Viatkogorgon and Nochnitsa are relatively small gorgonopsians, comparable in size to the South African middle Permian taxon Eriphostoma. Inclusion of Viatkogorgon and Nochnitsa in a phylogenetic analysis of gorgonopsians recovers them in basal positions, with Nochnitsa representing the earliest-diverging gorgonopsian genus. All other sampled gorgonopsians fall into two major subclades: one made up entirely of Russian taxa (Inostrancevia, Pravoslavlevia, Sauroctonus, and Suchogorgon) and the other containing only African taxa. The high degree of endemism indicated in this analysis for gorgonopsians is remarkable, especially given the extensive intercontinental dispersal inferred for coeval therapsid groups. [DOI: 10.7717/peerj.4933]

Abstract: A new therocephalian taxon (Gorynychus masyutinae gen. et sp. nov.) is described based on a nearly complete skull and partial postcranium from the Permian Kotelnich locality of Russia. Gorynychus displays an unusual mixture of primitive (“pristerosaurian”) and derived (eutherocephalian) characters. Primitive features of Gorynychus include extensive dentition on the palatal boss and transverse process of the pterygoid, paired vomers, and a prominent dentary angle; derived features include the absence of the postfrontal. Gorynychus can be distinguished from all other therocephalians by its autapomorphic dental morphology, with roughly denticulated incisors and postcanines. Phylogenetic analysis recovers Gorynychus as a non-lycosuchid, non-scylacosaurid therocephalian situated as sister-taxon to Eutherocephalia. The identification of Gorynychus as the largest predator from Kotelnich indicates that therocephalians acted as apex predators in middle-late Permian transition ecosystems in Russia, corroborating a pattern observed in South African faunas. However, other aspects of the Kotelnich fauna, and Permian Russian tetrapod faunas in general, differ markedly from those of South Africa and suggest that Karoo faunas are not necessarily representative of global patterns. [DOI: 10.7717/peerj.4954]