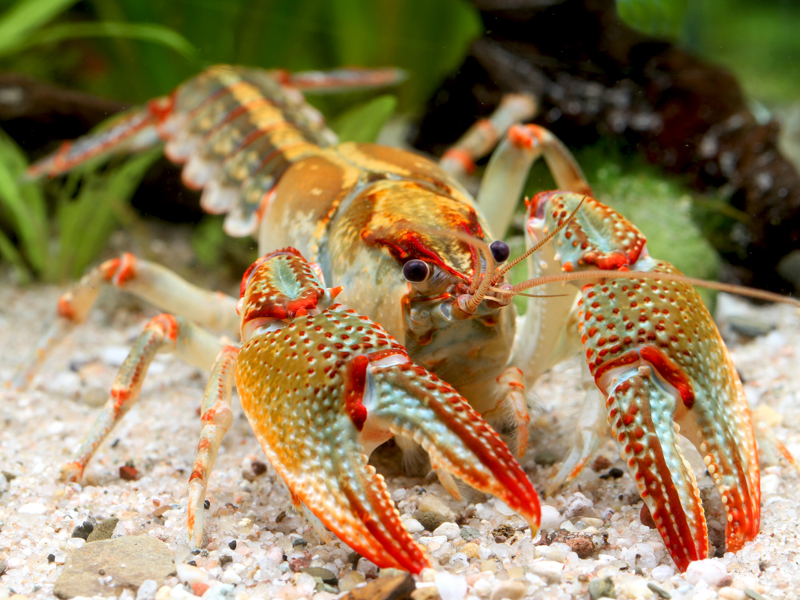 Raleigh, N.C. – A collaboration between the Ohio State University Museum of Biological Diversity (OSUMC) and The North Carolina Museum of Natural Sciences (NCMNS) has led to the identification of a new species of crayfish in the southeastern United States. Meet Lacunicambarus dalyae, or the jewel mudbug, a large, colorful burrowing crayfish found throughout Alabama, Florida, Georgia, Mississippi and Tennessee.

“Burrowing crayfish are understudied relative to stream-dwelling crayfish because of how hard they are to collect in their natural environments, which include habitats like floodplains, ephemeral pools and even roadside ditches,” explained Mael Glon, a PhD candidate in evolution, ecology and organismal biology at Ohio State University and lead author of the study. “Because there are so many unanswered questions about these creatures, I wanted to further the scientific community’s understanding of them, which ultimately led to the discovery of the Lacunicambarus dalyae.”

Freshwater crayfish are becoming increasingly imperiled due to habitat degradation, among other factors. Classifying the individual species by taxonomy is important to understanding whether a species is widespread or narrowly distributed. This data clarifies habitat distribution for conservation biologists who use the data to help track population stability and where best to focus their efforts.

“Freshwater organisms have a particularly limited ability to escape threats because they’re confined to a body of water,” said Glon. “We need to know what species are out there in order to protect them.”

During a trip to Tennessee in 2017, Glon first collected specimens of the jewel mudbug. After consulting with Zachary Loughman, Assistant Professor of Biology at West Liberty University and Bronwyn Williams, Non-Molluscan Invertebrates Research Curator at NCMNS, the team determined that while the crayfish looked similar to the Lacunicambarus polychromatus or, paintedhand mudbug, there were significant differences between the two.

Between 2017 and 2019, the team collected more specimens from burrows in Tennessee and Alabama, either pumped by hand or excavated with tools like a gardening pickaxe or shovel. Shortly following capture, the specimens were preserved in jars of 70 percent ethanol or frozen for further molecular analyses. The specimens are now preserved in the OSUMC crustacean collection and NCMNS non-molluscan invertebrate collection. The combination of freshly collected and previously collected museum specimens yielded the discovery of the jewel mudbug.

The jewel mudbug, Lacunicambarus dalyae, is widely distributed throughout the southeastern United States and commonly found in burrows on the banks and floodplains of streams within its range, despite ongoing habitat degradation. Based on these findings, the researchers recommend the jewel mudbug be considered Currently Stable following the American Fisheries Society’s Endangered Species Crayfish Subcommittee criteria or of Least Concern following the International Union for Conservation of Nature criteria.

Note to editors: An abstract follows.

The Jewel Mudbug, Lacunicambarus dalyae sp. nov., is a large, colorful primary burrowing crayfish found in Alabama, Florida, Georgia, Mississippi and Tennessee. This species is most similar in appearance to the Paintedhand Mudbug, L. polychromatus, a species found across the Midwestern United States. The ranges of the two species overlap minimally, and they can be distinguished from each other based on several characters, the most notable of which is the much longer central projection of the gonopod in Form I and II males of L. dalyae sp. nov. relative to L. polychromatus. Like its congeners, L. dalyae sp. nov. is commonly found in burrows in the banks and floodplains of streams and is resilient to a moderate amount of anthropogenic habitat degradation, being occasionally collected from burrows in roadside ditches and urban lawns.

About the North Carolina Department of Natural and Cultural Resources

The N.C. Department of Natural and Cultural Resources (NCDNCR) is the state agency with a vision to be the leader in using the state’s natural and cultural resources to build the social, cultural, educational and economic future of North Carolina. NCDNCR’s mission is to improve the quality of life in our state by creating opportunities to experience excellence in the arts, history, libraries and nature in North Carolina by stimulating learning, inspiring creativity, preserving the state’s history, conserving the state’s natural heritage, encouraging recreation and cultural tourism, and promoting economic development.