A newly discovered crocodilian ancestor may have filled one of North America’s top predator roles before dinosaurs arrived on the continent. Carnufex carolinensis, or the “Carolina Butcher,” was a 9-foot long, land-dwelling crocodylomorph that walked on its hind legs and likely preyed upon smaller inhabitants of North Carolina ecosystems such as armored reptiles and early mammal relatives.

Paleontologists from North Carolina State University and the North Carolina Museum of Natural Sciences recovered parts of Carnufex’s skull, spine and upper forelimb from the Pekin Formation in Chatham County, North Carolina. Because the skull of Carnufex was preserved in pieces, it was difficult to visualize what the complete skull would have looked like in life. To get a fuller picture of Carnufex’s skull the researchers scanned the individual bones with the latest imaging technology — a high-resolution surface scanner. Then they created a three-dimensional model of the reconstructed skull, using the more complete skulls of close relatives to fill in the missing pieces.

The Pekin Formation contains sediments deposited 231 million years ago in the beginning of the Late Triassic (the Carnian), when what is now North Carolina was a wet, warm equatorial region beginning to break apart from the supercontinent Pangea. “Fossils from this time period are extremely important to scientists because they record the earliest appearance of crocodylomorphs and theropod dinosaurs, two groups that first evolved in the Triassic period, yet managed to survive to the present day in the form of crocodiles and birds,” says Lindsay Zanno, assistant research professor at NC State, director of the Paleontology and Geology lab at the Museum, and lead author of a paper describing the find. “The discovery of Carnufex, one of the world’s earliest and largest crocodylomorphs, adds new information to the push and pull of top terrestrial predators across Pangea.”

Typical predators roaming Pangea included large-bodied rauisuchids and poposauroids, fearsome cousins of ancient crocodiles that went extinct in the Triassic Period. In the Southern Hemisphere, “these animals hunted alongside the earliest theropod dinosaurs, creating a predator pile-up,” says Zanno. However, the discovery of Carnufex indicates that in the north, large-bodied crocodylomorphs, not dinosaurs, were adding to the diversity of top predator niches. “We knew that there were too many top performers on the proverbial stage in the Late Triassic,” Zanno adds. “Yet, until we deciphered the story behind Carnufex, it wasn’t clear that early crocodile ancestors were among those vying for top predator roles prior to the reign of dinosaurs in North America.”

As the Triassic drew to a close, extinction decimated this panoply of predators and only small-bodied crocodylomorphs and theropods survived. “Theropods were ready understudies for vacant top predator niches when large-bodied crocs and their relatives bowed out,” says Zanno. “Predatory dinosaurs went on to fill these roles exclusively for the next 135 million years.”

Still, ancient crocodiles found success in other places. “As theropod dinosaurs started to make it big, the ancestors of modern crocs initially took on a role similar to foxes or jackals, with small, sleek bodies and long limbs,” says Susan Drymala, graduate student at NC State and co-author of the paper. “If you want to picture these animals, just think of a modern day fox, but with alligator skin instead of fur.”

N.C. Museum of Natural Sciences curator Vincent Schneider recovered the specimen, and it was analyzed by Zanno and Drymala, with contributions by Schneider. Sterling Nesbitt of Virginia Polytechnic Institute also contributed to the work. The researchers’ findings appear in the open access journal Scientific Reports. 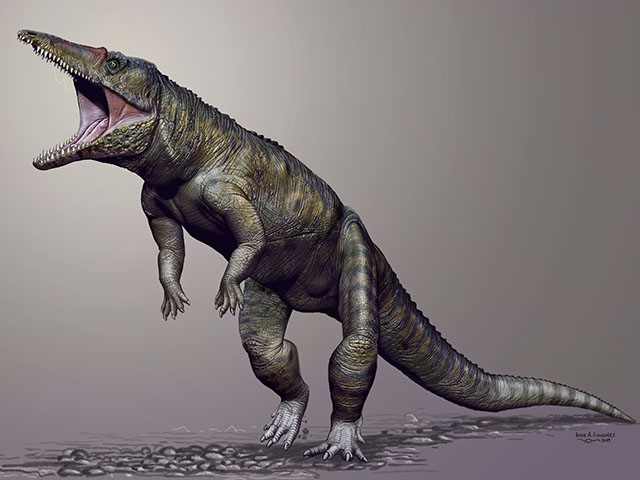 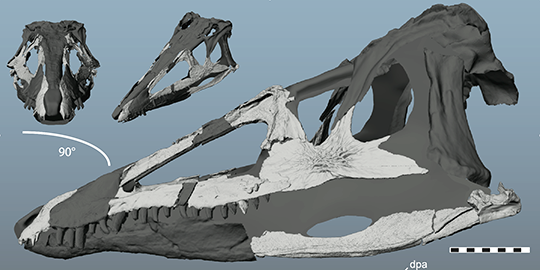 Triassic predatory guild evolution reflects a period of ecological flux spurred by the catastrophic end-Permian mass extinction and terminating with the global ecological dominance of dinosaurs in the early Jurassic. In responding to this dynamic ecospace, terrestrial predator diversity attained new levels, prompting unique trophic webs with a seeming overabundance of carnivorous taxa and the evolution of entirely new predatory clades. Key among these was Crocodylomorpha, the largest living reptiles and only one of two archosaurian lineages that survive to the present day. In contrast to their existing role as top, semi-aquatic predators, the earliest crocodylomorphs were generally small-bodied, terrestrial faunivores, occupying subsidiary (meso) predator roles. Here we describe Carnufex carolinensis, a new, unexpectedly large-bodied taxon with a slender and ornamented skull from the Carnian Pekin Formation (~231 Ma), representing one of the oldest and earliest diverging crocodylomorphs described to date. Carnufex bridges a problematic gap in the early evolution of pseudosuchians by spanning key transitions in bauplan evolution and body mass near the origin of Crocodylomorpha. With a skull length of >50 cm, the new taxon documents a rare instance of crocodylomorphs ascending to top-tier predator roles in the equatorial regions of Pangea prior to the dominance of dinosaurs.