Blue, Red & Spiny All Over 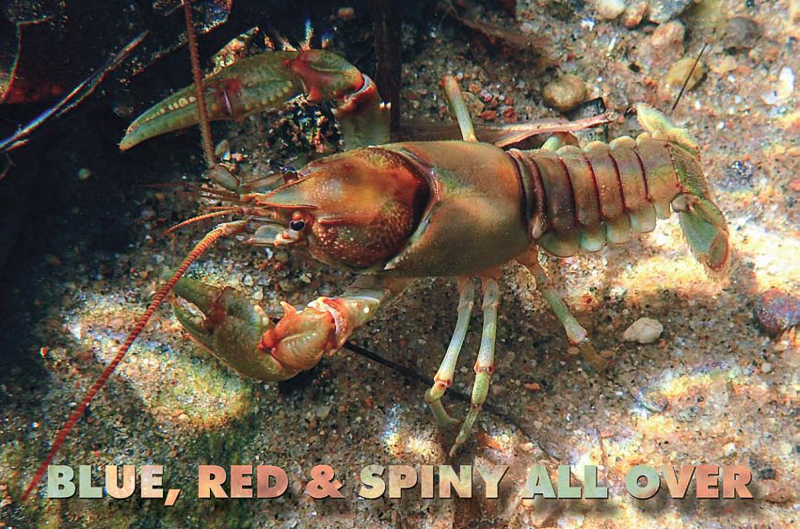 On a warm October day in 1984, Vince Schneider waded through the Jacob Fork River in South Mountains State Park — his attention captured by a bright red hue darting across the riverbed. Intrigued, Schneider, a curator of paleontology at the North Carolina Museum of Natural Sciences, caught up with the clawed creature and plucked it from the water, observing its brilliant blue tailfin fringed with vibrant red.

It was unlike any other crayfish known to inhabit the region at that time — and this particular specimen was not alone, joined in the water by other pops of color sifting through the stones and silt at Schneider’s feet.

Schneider jarred the specimen and brought it back to his colleague, the late John Cooper, a research curator of crustaceans at the N.C. Museum of Natural Sciences.

“That was just their standard protocol: Capture unique specimens, throw it in a jar and give it to John Cooper,” said Michael Perkins, an aquatic wildlife diversity biologist for the N.C. Wildlife Resources Commission. “John made notes about this species in his files, and more specimens were collected throughout the ‘80s, ‘90s and 2000s” — found only in the Jacob Fork and Henry Fork rivers — “but no one really knew what this crayfish was and how it fit in to the bigger picture in North Carolina.”

That is, Perkins said, until the “crayfish nerds” caught on to the discovery — and pushed to solve this decades-long mystery. “The thing that jumped out to us was the coloration, particularly around the tail or tailfin,” Perkins said, adding that he was first introduced to the crayfish in 2017 by N.C. Wildlife colleague William T. Russ.

“There’s this blue shade fringed with bright red that’s not common in any of the other species that co-occur in these waters — or really in the entire western part of the state.” Of course, he added, there were other things too: The shape of the claws, the number of spines around the hepatic region, patterns of spination and other much more subtle characteristics.

“We collected a couple of these weird things, and it was clear that these were definitely not the usual flavor of species that we find around here,” Perkins said.

In February 2019, the new crayfish species received its official name, Cambarus franklini, or the South Mountains crayfish, in a scientific article authored by Perkins, Russ and N.C. Museum of Natural Sciences Research Curator Bronwyn Williams. Now, Perkins and his colleagues have begun the process of protecting this rare and hyper-localized species, which lives in two distinct and unconnected populations in the Jacob Fork and Henry Fork rivers.

With the inclusion of Cambarus franklini, 46 species of crayfish have been identified in North Carolina. But about a quarter of them — maybe 15-20 species, Perkins estimates — have yet to be described.

“We’re a well-known global aquatic biodiversity hot spot,” Perkins explained, referencing in particular an abundance of fish, mussel and crayfish species. “And we’re still in the process of figuring out just how many species there are, because so many are still out there, undescribed.

“That’s the really exciting thing,” he continued. “We’ve begun this statewide inventory, basically taking a genetic sample of every specimen. And, as we hone in on all these different species, we’ll start to uncover this hidden biodiversity in North Carolina.”

Though they may be small and relatively unassuming, crayfish play an important role in the ecosystem — upcycling nutrients, breaking down leaf litter and preventing the buildup of harmful nitrates by burrowing and stirring up sediment. This makes these species’ formal discovery and ensuing protection invaluable when looking at aquatic resource conservation as a whole.

“Coming from a conservationist point of view, there’s a lot of intrinsic value in biodiversity,” Perkins said. “The South Mountains crayfish is something that you can’t find anywhere else in the world, and I think that’s worth protecting and cherishing.”

This article reproduced by kind permission of Foothills Conservancy of North Carolina.