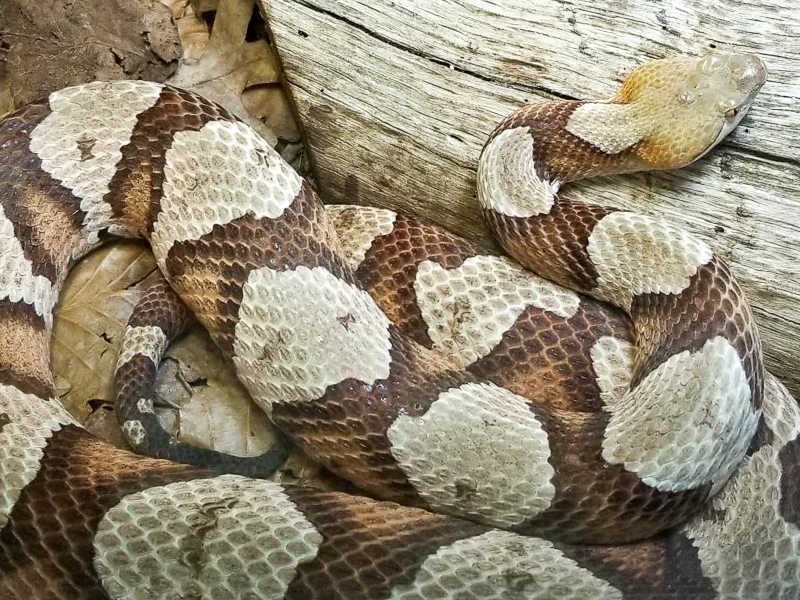 It’s finally springtime! The birds are singing, the flowers are blooming, the bees are buzzing … and the snakes are slithering. The last one may not seem to fit the scene, but snakes and other reptiles are starting to emerge from their winter slumber along with the other animals and plants. Of these, one of North Carolina’s most recognizable is the copperhead (Agkistrodon contortrix).

These venomous snakes mate during April and May, and females typically give birth during the summer months. During these warmer, wetter days, it’s not uncommon to see copperheads sunning themselves on rocks, or searching for small prey in leafy areas near their dens.

Although copperheads have a notorious reputation, their venom did not evolve as a defensive mechanism, but rather as a feeding mechanism. They are ambush predators, which means that they lie in wait for their prey to come near and then the snake strikes. They typically eat small mammals, birds, frogs and other snakes. Unlike constrictors, which grab and hold prey, copperheads deliver a quick bite to inject the venom, and then retreat. They wait until their prey is subdued before consuming it whole. 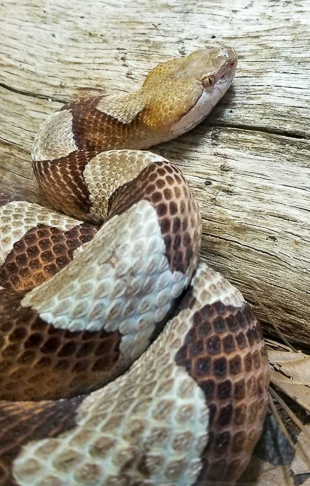 Copperhead bites are considered medically significant. However, their bites are very rarely fatal. They are a non-aggressive species that prefers to retreat instead of attacking in self-defense. In the cases where humans do get bitten, it’s usually after stepping on the snake, or trying to move or kill the animal.

At the Museum, we have many North Carolina-native venomous snakes, including copperheads. They are on display in the Snakes of North Carolina exhibit on the third floor of the Nature Exploration Center. Caring for these creatures involves meticulous training, routine drills and a great deal of common sense. Tools are always used to keep the animal out of striking distance of the keeper (at least half the animal’s body length). Bite drills are a common practice and involve Living Collections staff, Museum Security and WakeMed EMS.

To learn more about how we care for our venomous reptiles, check out this pre-recorded program from Reptile and Amphibian Days on the Museum’s YouTube channel.

And be sure to check out our copperhead in person the next time you visit!