A tiny ancient relative of dinosaurs and pterosaurs discovered 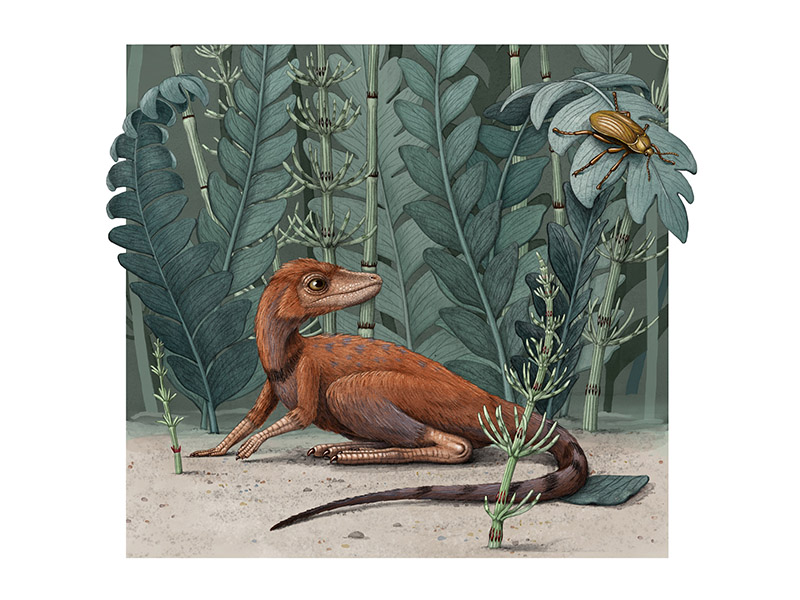 Dinosaurs and flying pterosaurs may be known for their remarkable size, but a newly described species from Madagascar that lived around 237 million years ago suggests that they originated from extremely small ancestors. The fossil reptile, named Kongonaphon kely, or “tiny bug slayer,” would have stood just 10 centimeters (or about 4 inches) tall. The description and analysis of this fossil and its relatives, published today in the journal Proceedings of the National Academy of Sciences, may help explain the origins of flight in pterosaurs, the presence of “fuzz” on the skin of both pterosaurs and dinosaurs, and other questions about these charismatic animals.

“There’s a general perception of dinosaurs as being giants,” said Christian Kammerer, a research curator in paleontology at the North Carolina Museum of Natural Sciences and a former Gerstner Scholar at the American Museum of Natural History. “But this new animal is very close to the divergence of dinosaurs and pterosaurs, and it’s shockingly small.”

Dinosaurs and pterosaurs both belong to the group Ornithodira. Their origins, however, are poorly known, as few specimens from near the root of this lineage have been found. The fossils of Kongonaphon were discovered in 1998 in Madagascar by a team of researchers led by American Museum of Natural History Frick Curator of Fossil Mammals John Flynn (who worked at The Field Museum at the time) in close collaboration with scientists and students at the University of Antananarivo, and project co-leader Andre Wyss, chair and professor of the University of California-Santa Barbara’s Department of Earth Science and an American Museum of Natural History research associate.

“This fossil site in southwestern Madagascar from a poorly known time interval globally has produced some amazing fossils, and this tiny specimen was jumbled in among the hundreds we’ve collected from the site over the years,” Flynn said. “It took some time before we could focus on these bones, but once we did, it was clear we had something unique and worth a closer look. This is a great case for why field discoveries—combined with modern technology to analyze the fossils recovered—is still so important.”

“Discovery of this tiny relative of dinosaurs and pterosaurs emphasizes the importance of Madagascar’s fossil record for improving knowledge of vertebrate history during times that are poorly known in other places,” said project co-leader Lovasoa Ranivoharimanana, professor and director of the vertebrate paleontology laboratory at the University of Antananarivo in Madagascar. “Over two decades, our collaborative Madagascar-U.S. teams have trained many Malagasy students in paleontological sciences, and discoveries like this helps people in Madagascar and around the world better appreciate the exceptional record of ancient life preserved in the rocks of our country.”

Kongonaphon isn’t the first small animal known near the root of the ornithodiran family tree, but previously, such specimens were considered “isolated exceptions to the rule,” Kammerer noted. In general, the scientific thought was that body size remained similar among the first archosaurs—the larger reptile group that includes birds, crocodilians, non-avian dinosaurs, and pterosaurs—and the earliest ornithodirans, before increasing to gigantic proportions in the dinosaur lineage.

“Recent discoveries like Kongonaphon have given us a much better understanding of the early evolution of ornithodirans. Analyzing changes in body size throughout archosaur evolution, we found compelling evidence that it decreased sharply early in the history of the dinosaur-pterosaur lineage,” Kammerer said.

This “miniaturization” event indicates that the dinosaur and pterosaur lineages originated from extremely small ancestors, yielding important implications for their paleobiology. For instance, wear on the teeth of Kongonaphon suggests it ate insects. A shift to insectivory, which is associated with small body size, may have helped early ornithodirans survive by occupying a niche different from their mostly meat-eating contemporaneous relatives. 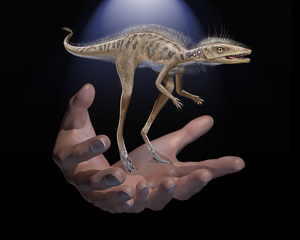 The work also suggests that fuzzy skin coverings ranging from simple filaments to feathers, known on both the dinosaur and pterosaur sides of the ornithodiran tree, may have originated for thermoregulation in this small-bodied common ancestor. That’s because heat retention in small bodies is difficult, and the mid-late Triassic was a time of climatic extremes, inferred to have sharp shifts in temperature between hot days and cold nights.
Right: Kongonaphon to scale. Credit: American Museum of Natural History (AMNH). Click for larger image.

Sterling Nesbitt, an assistant professor at Virginia Tech and a Museum research associate and expert in ornithodiran anatomy, phylogeny, and histological age analyses, is also an author on this study.

This study was supported, in part, by the National Geographic Society, a Gerstner Scholars Fellowship from the Gerstner Family Foundation and the Richard Gilder Graduate School, the Division of Paleontology at the American Museum of Natural History, and a Meeker Family Fellowship from the Field Museum, with additional support from the Ministry of Energy and Mines of Madagascar, the World Wide Fund for Nature (Madagascar), University of Antananarivo, and MICET/ICTE (Madagascar).