Brian is broadly interested in the ecology and conservation of birds, especially in the Guiana Shield of northeastern South America. His research interests include the distribution, community dynamics, and spatial ecology of birds in lowland rainforest and coastal secondary forests of Guyana and Suriname. In each of these countries, he has initiated long-term banding projects at selected field sites to address questions of territory stability, community similarity, and species turnover in the context of changing land use. He maintains strong ties with local biologists, students, and NGOs, with whom he has collaborated on several survey expeditions to remote interior localities in the Guianas. His survey work has generated a wealth of information on avian distributions in the Guianas, with a keen interest in the use of these data in conservation. As a Research Associate with Global Wildlife Conservation, Dr. O’Shea has worked extensively with the Iwokrama Centre for Rainforest Conservation and Development, Conservation International, and the Worldwide Fund for Nature. 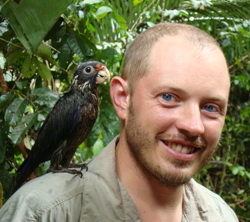