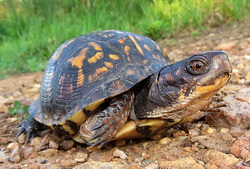 So you found a box turtle! First of all, it is important to “detain” the turtle for as little time as possible with the least possible stress. It may not seem stressful to you to pick up a box turtle, but from the turtle’s perspective it is assuming that you are considering making a meal out of it. That’s why an individual withdraws into its shell and “closes up” when you pick it up. The quicker you can document the turtle and send it on its way, the better!

The shell color and pattern are unique for each turtle, particularly when combined with scars and irregularities of the shell. Most modern digital cameras can take quite good photographs of box turtles. In bright sunlight (or with flash) take several photographs of the top part of the shell (carapace) and the bottom of the shell (plastron). Try to get close enough so that the turtle almost fills the frame of your photo. You may need to set your camera to a macro or close-up setting to focus on the turtle up close. If there are any scars or other unique irregularities of the shell, be sure to take some close-up photos of those. Make sure that your photos are sharp and clear enough to allow you to identify the turtle in the future. Most digital cameras will record the date that the photos were taken, but it is still recommended that you maintain a journal of some type to record all the specifics of the turtle encounter on paper. When you download the photos to your computer, set up a computer file system so that you can link the photos taken with the notes about the specific turtle.

Maintain a written field journal or record information about your turtle encounter on a data sheet. This can be an existing data sheet format (sample data sheet Word document) or one that you create. The more that you can record about your turtle, where it was found and what it was doing, the better! Measurements and notes about physical attributes of the turtle would be good if you are able to take them. Try at least to note eye color (best seen before the turtle closes up into the shell) and sex of the turtle. Generally males will have bright red eyes and the posterior half of the plastron will have a noticeable depression forming a concave surface.

Record your box turtle observation on the Carolina Herp Atlas. This atlas was developed by Davidson College to allow you to record any reptiles and amphibians that you see. Log on to www.carolinaherpatlas.org to register for this free service. By recording your box turtles on the Atlas you are contributing to our knowledge of the distribution and relative abundance of box turtles. This information is available to scientists for additional research purposes.

After photographing and documenting the turtle simply release it in the same location that you found it, pointing it in the same direction. If it was in the road or about to cross a road, release it off the road on the side that it was going toward originally. Try to ensure the turtle’s safe passage to natural cover by watching it from a distance until it has entered the woods or field or garden. If you think that it is in danger from being mowed over or falling into your neighbor’s pool or being injured by your neighbor’s dog, then a minor translocation may be in order. Release the turtle in the closest place to where it was found that you consider safe. Please make note of this “relocation.” We are talking about tens of feet here, not miles! Box turtles know their home territory! Relocating a turtle into a strange area may make it wander and become more likely to encounter danger. The sooner that you permit the turtle to be on its way, the more likely that it will simply assume its original activity routine. If you found the turtle hiding in a leaf pile or dug into a flower garden, then replace the turtle where it was found. Again, detain the turtle for as short of a time as possible!

Now you should record where you encountered the turtle on a map or aerial photograph. You may use an existing survey map of your neighborhood, but I recommend that you document your turtle on one or both of the following:

Google Earth is a free program that allows you to pull up detailed aerial photographs of your neighborhood and place markers of turtle locations for future reference. You can save these aerial images as photos for printing and reference.

The Carolina Herp Atlas also has a good mapping program to document the location of your turtle records.

The objective is to be able to identify the same turtles later and note the different locations where they are found on different dates. In some cases it may be years before you see the same turtle again. This is why good photographs and good records are important. What you may reveal over time is the home range of the turtle in your neighborhood—that is where it lives on a daily and seasonal basis.

Step 5: Send in your record

Sending in your records to the Museum will help preserve your information and make it available to others doing turtle research. Over the years, this information being generated by citizen scientists may be very helpful in understanding more about these turtles in suburban environments.

Another important goal of this project is to make people more aware of turtles in their environment. We hope that you will become an advocate for the turtles and that you will encourage your neighbors and friends to be turtle-friendly. Being turtle-friendly means coexisting with turtles in your neighborhood in ways that help them and keep them safe.

Safe Passage: Simply make your neighbors aware of the presence of box turtles in the neighborhood and encourage them to be on the lookout for turtles to prevent them being harmed accidentally from human activities.

Natural Areas: Encourage the preservation and even restoration of natural areas in your neighborhood. Box turtles are basically terrestrial turtles that utilize a variety of habitats from forests to open fields. Reducing the footprint of paved surfaces and sterile, over-manicured lawns will leave more natural areas for the turtles to live in. Allowing a zone at the back half of your backyard to return back to the meadow or forest that might be behind your house increases the turtles’ habitat and reduces your need to waste resources on lawn maintenance. If you have turtles in your neighborhood now, then there must be some natural areas nearby providing adequate cover, food, nesting sites, and overwintering sites to support your local population of turtles. Any efforts to preserve and increase these natural areas will help ensure that turtles (and other wildlife) continue to live in your neighborhood. In addition, encourage the preservation of larger natural areas in your community by supporting public and private land conservation programs.

Neighborhood Predators: Dogs and cats can prey on box turtles and their young. Encourage responsible pet ownership in which dogs are restrained by fencing and cats are kept inside to prevent injury or death to box turtles. Please note that some dogs will harmlessly “collect” box turtles that they encounter while others will chew or crush the turtles in their jaws. Cats are primarily predators of vulnerable young turtles. Supporting programs that reduce feral populations of cats and dogs will also help turtle populations in the long run. Predation by native animals such as raccoons is natural. But do not “subsidize” natural predators by feeding them or making your food waste available. Such subsidization will only lead to more raccoons and other natural predators in your neighborhood, increasing the risks to turtles.

Discourage keeping turtles as pets: This is a sensitive issue since some kids learn about animals by keeping them as pets. However, turtles are wild animals and encouraging kids to enjoy their encounters with turtles in the neighborhood without “imprisoning” them is better for the turtles. Although some turtle pet owners are very responsible and take good care of their captives, many captive turtles suffer from neglect and improper care. Even when well cared for, captive turtles are prevented from performing their natural ecological roles and from contributing their genetic material to wild populations. It is good to encourage kids to have an interest in the turtles, but try to do it in a way that does not take the turtle out of its natural habitat. Kids can participate in the documentation of box turtles in the neighborhood and can enjoy their contact with the turtle before it is released. Encouraging kids to track box turtles from a distance with binoculars may actually reveal some useful information about the turtles and would be a fun activity. Getting the neighborhood kids interested in participating in the documentation of turtles will provide them with the opportunity to learn about turtles and contribute to our understanding of the turtles.

For more information about this box turtle project, please contact: