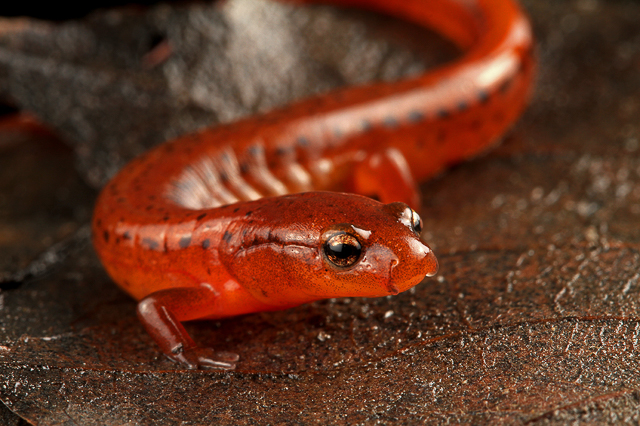 [RALEIGH, NC] – Already possessing more salamander species than any other state in the country with 63, North Carolina has just added one more to make it 64. The aptly named Carolina Sandhills Salamander (Eurycea arenicola) is found in association with springs, seepages and small blackwater streams of the Sandhills region of North Carolina.

The Carolina Sandhills Salamander was previously lumped in as an unusual population of the Southern Two-lined Salamander (Eurycea cirrigera), but researchers at the North Carolina Museum of Natural Sciences applied next generation sequencing technology to show that the new species differs genetically (in both the mitochondrial and nuclear genome) from other species of two-lined salamanders (Eurycea bislineata complex). These results, published in Herpetologica today, back up more conspicuous evidence, as the Carolina Sandhills Salamander also differs in coloration, size and natural history from other members of the complex.

It’s a discovery 50 years in the making. The first specimen was collected and identified in October 1969 and brought to the attention of the NC Museum’s Alvin Braswell, then the assistant curator for lower invertebrates and now only recently retired. At first, Braswell thought that this original specimen was just a weird individual of Eurycea cirrigera, but then in the mid-1970s he started finding more “weird individuals” and thought, “Whoa, maybe there’s something to this.” As it turned out, the original specimen had been misidentified. Among other things, Eurycea arenicola is smaller on average in size, and mature individuals have a pronounced reddish color. “It’s a real neat critter,” notes co-author Braswell. 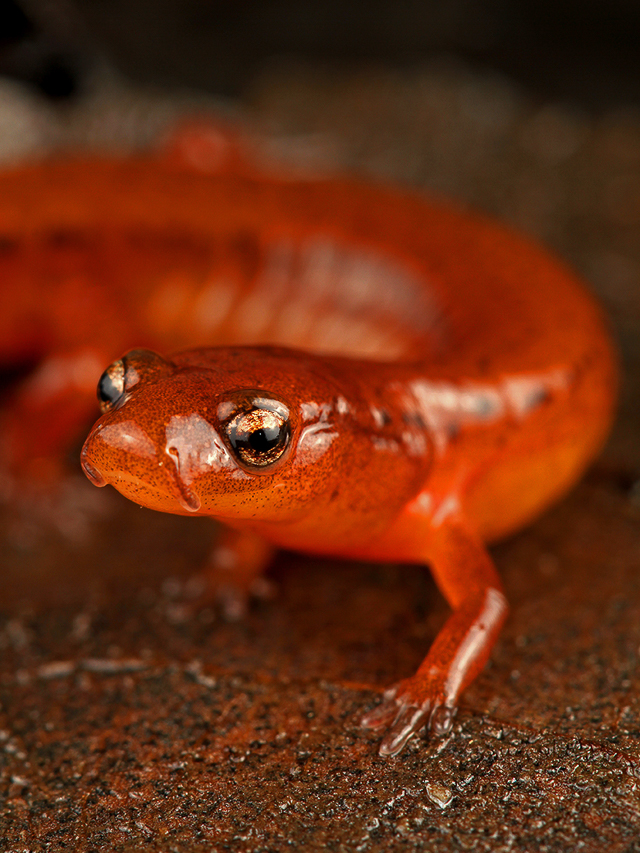 The fact that its range is restricted to the Sandhills is also unique. The Sandhills, according to Braswell, is an area that comprises the “best of what’s left in North Carolina” of the once extensive Longleaf Pine ecosystem, which stretched from southeast Virginia all the way south to Florida. So much of that ecosystem, roughly 95 percent, has been altered or lost through development and conversion to other land use practices, but the NC Sandhills includes extensive Game Lands and Fort Bragg, protecting some very important habitat. The name itself reflects the species’ tie to the Sandhills, as arenicola means “dweller of a sandy place” in Latin.

In the 1980s, Braswell began the process of describing the new species but never completed it. Braswell, burdened with administrative duties, ultimately turned it over to Bryan Stuart, who joined the NC Museum as research curator of herpetology in 2008, imploring him to “take it and run with it.” Finally, in 2013 Stuart received a National Science Foundation Research Opportunity Award (ROA) that enabled detailed genetic research using a new, next generation sequencer. “With that machine, we were able to sequence a sufficiently large number of genes to test the distinct species status of the Carolina Sandhills Salamander,” says Stuart, lead author on the paper.

Carolina Sandhills Salamander specimens were located and collected in Harnett, Hoke, Montgomery, Moore, Richmond, Robeson and Scotland counties. “Almost every known specimen of the new species is housed in our collection, with just a handful of individuals at a few other museums,” notes Jeff Beane, collections manager for herpetology at the NC Museum and a co-author on the paper. “No records are yet known from South Carolina, but we have a record in North Carolina that is only two miles from the state line, so it gets close.”

Despite being unnamed until this paper came out, the small geographic range of the Carolina Sandhills Salamander has prompted it to be listed on the W3 Watch List by the North Carolina Natural Heritage Program – meaning it is a “species that is poorly known and perhaps needs listing in upcoming years.”

“This research also shows that there are other undescribed species in this complex that await description, even some that occur in North Carolina,” Stuart adds. “So, there is definitely more to do with two-lined salamanders in the state.”