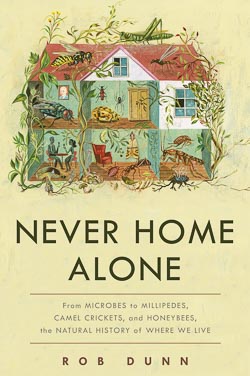 The average American now spends more than 23 hours a day indoors, whether that be in houses, schools, offices or vehicles. As a result, the vast majority of the interactions we have with other species are those we have indoors. Yet, although our homes were one of the first realms to be studied by biologists, we have neglected, for most of the past 100 years, to study the species we live alongside. Where we did study them, we focused on how to kill the minority of species that caused us real harm. In this talk, Rob Dunn will tell stories from his book, “Never Home Alone,” about new revelations from the past 15 years of studies of the life indoors. He will explore the many ways in which the species in our homes benefit us, either as individuals or collectively. He will share insights from work he has done with researchers at the North Carolina Museum of Natural Sciences on particular species of interest to all of us. He will provide new ways of thinking about the life around us in the future. A book signing will follow the lecture.

Rob Dunn is a professor in the Department of Applied Ecology at North Carolina State University and in the Natural History Museum of Denmark at the University of Copenhagen. He lives in Raleigh, North Carolina. He has written six books, and more than a hundred scientific articles and his science essays have appeared at magazines such as BBC Wildlife Magazine, Scientific American, Smithsonian Magazine, National Geographic and others.

Snacks and beverages will be available for purchase on the first floor of the Nature Exploration Center from 5:30 to 7pm.