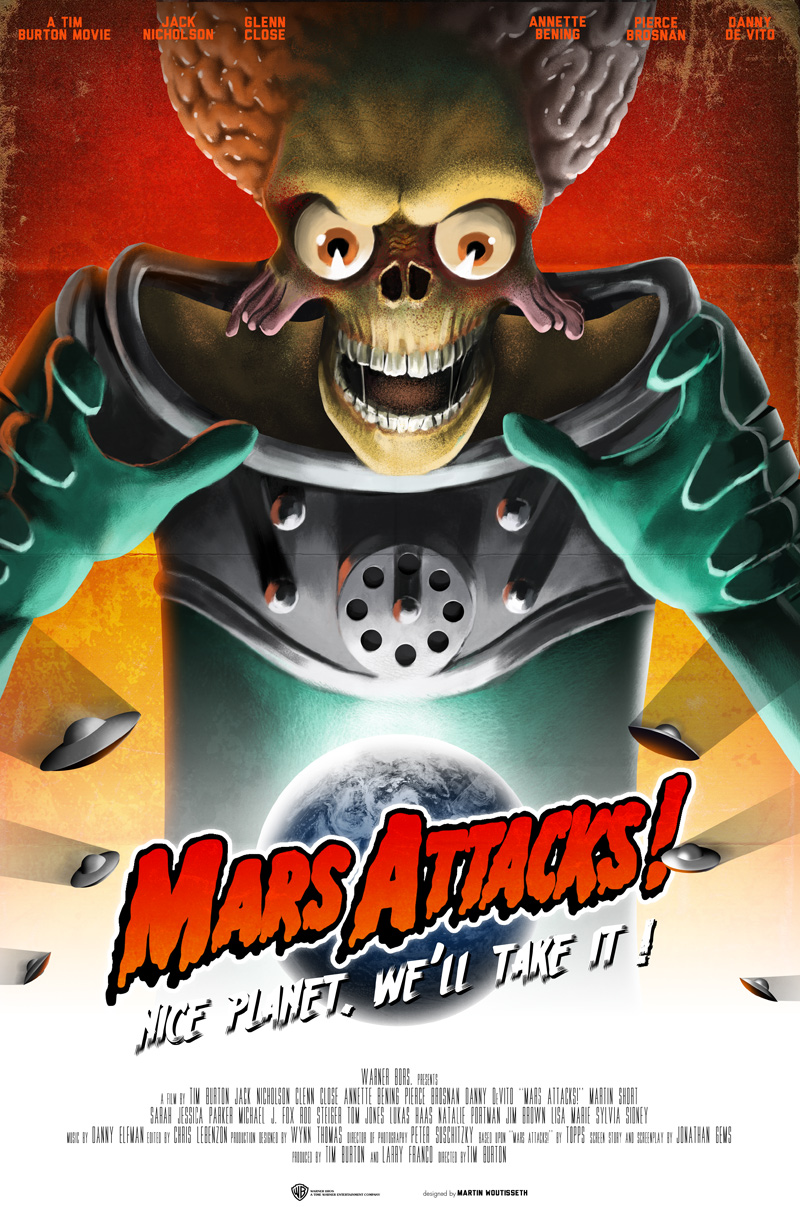 Have you seen a herd of cattle on fire running down the street? Or perhaps a chihuahua with human head? How about strange creatures with large eyes and giant green brains? Martians have come to Earth, and they didn’t come in peace!

Avoid the Martian death-rays and join the human resistance in a special prelude to Astronomy Days —  Finally Friday:  Mars Attacks! This month’s expert is the Museum’s very own Patrick Treuthardt, Assistant Head of the Astronomy & Astrophysics Research Lab. He will help us sort out the science behind the movie. Don’t miss it!

Check out the upcoming movies and learn more about the Finally Friday: Where Science meets the Cinema.

From Warner Brothers and the award-winning director Tim Burton, the 1996 movie “Mars Attacks!” was actually based on Topps chewing gum cards from the 1960s. The movie featured a star-studded cast, including Jack Nicholson, Glenn Close, Annette Bening, Pierce Brosnan, Danny DeVito, Martin Short, Sarah Jessica Parker, Michael J. Fox, Natalie Portman and Tom Jones. Despite receiving mixed responses from critics and the public, Mars Attacks! quickly became a cult classic. In the movie, Martian spacecraft surround the world’s major cities, and all of humanity waits to see if the extraterrestrial visitors have, as they claim, “come in peace.” U.S. President James Dale (Jack Nicholson) receives assurance from science professor Donald Kessler (Pierce Brosnan) that the Martians’ mission is a friendly one. But when a peaceful exchange ends in the total annihilation of the U.S. Congress, military men call for a full-scale nuclear retaliation.

Aliens Invade!
NC Museum of Natural Sciences
Mars does not have a monopoly on destructive aliens.  Learn about aliens that are also earthlings…they just are in the wrong place!  From rats to cane toads, invasive exotics are wreaking havoc on our native ecosystems.  Meet a few and learn how you can help control the alien invasion!

Sound Science
NC Museum of Natural Sciences
Learn about sound waves and participate in activities to see them in action!

Space Games
NC Museum of Natural Sciences
Come and test your knowledge of other space/alien movies. Can you guess a movie by seeing only one frame? Plus you can show off your “zapping” skills with our space target game!

Lift Off NC
NC Museum of Natural Sciences
Are you ready for the upcoming Astronomy Days? Come have a sneak peak of our Astronomy Days event, where we’ll be celebrating the 50th anniversary of the Apollo moon missions.

Insect Invasion
Arthropod Zoo. NC Museum of Natural Sciences
North Carolina has been invaded, but not by aliens! These creatures that walk among us are invasive insects. Learn about these insect species ranging from Chinese mantids to camel crickets with the Arthropod Zoo.

The Hidden Martian
NC Museum of Natural Sciences
Create a sliding drawing of Mars to take home with you. Be careful–this craft comes with with an special hidden guest!

Mars Attacks! Button Handouts
NC Museum of Natural Sciences
Hot off the press! A new button from our Finally Friday movie collection has been released. Numbers are limited, so get one fast before they are disintegrated!