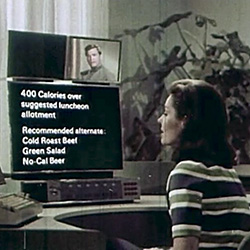 The Future Is Not as Good as It Used to Be

Ah, the ‘60s. A decade that brought us mop tops, Woodstock, and the invention of AstroTurf. It was also a decade defined by excitement about the future, culminating in 1969 with the first moon landing, and a quietly released film called “Year 1999 AD,” that tried to portray life on the brink of the 21st Century. At our first Final Friday we’ll explore what the film got right and wrong, and the difficulties in predicting future technology and culture.

Science-fiction author Dr. John Kessel will talk about the film after the screening.

About the Speaker
John Kessel is a professor of creative writing and American literature at NCSU. An award  winning author, his books include Good News from Outer Space, Corrupting Dr. Nice, and The Pure Product.  His story collection, Meeting in Infinity, was named a notable book of 1992 by the New York Times Book Review.  His recent collection The Baum Plan for Financial Independence and Other Stories contains the 2008 Nebula-Award-winning story “Pride and Prometheus.”  Kessel has taught at NCSU since 1982, and helped organize and served as the first director of the university’s Master of Fine Arts program in creative writing.

Food and drinks are available for purchase from 6pm-7pm