No Shadow of a Doubt: The Einstein Test at the Eclipse of 1919 and After 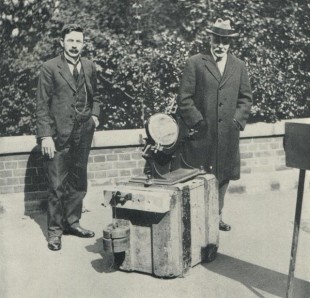 In 1919 Astronomers from two British Observatories travelled to Africa and South America to observe a total eclipse of the Sun. During the eclipse they carried out an experiment to test Einstein's predictions that light is affected by gravity and that spacetime is curved by the same force. The success of the expeditions made Einstein a world-famous figure overnight.

Image: Sir Frank Watson Dyson, Astronomer Royal and Charles Davidson, two of the astronomers of 1919 preparing for a subsequent eclipse in 1927 with the instrument used in 1919.